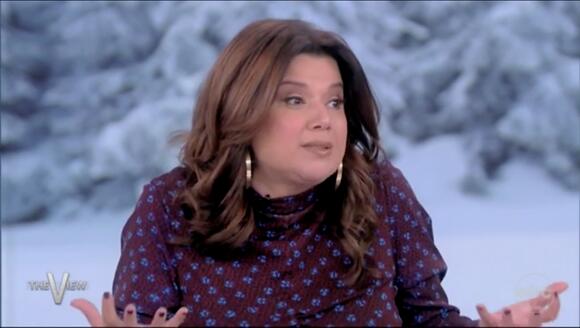 T he hosts on The View shared their thoughts Friday on the Netflix documentary surrounding Prince Harry and his wife Meghan, the Duchess of Sussex .

The series has yet to set a release date, but it unleashed its trailer earlier this week while Prince William and his wife Catherine, the Princess of Wales, made a visit to the United States, which caused the hosts to consider the coincidence of the timing. Guest host Ana Navarro suggested that Harry and Meghan could have stopped the trailer from being released at the same time as their family's trip. Instead, Navarro mused, the pair appear to be "great at marketing themselves."

"They’ve now earned tens and tens of millions of dollars out of their story which they have been telling, it seems to me, for years now, and they’re very good at it," Navarro said. She went on to point out that the timing was coincidental enough that it became a topic on their show. "I just wish that every time I saw Meghan and Harry, they weren’t crying and wiping away tears and they were giving me something positive."

'WOULD BE NO HUNGER': ALYSSA MILANO SLAMS MUSK BUYING TWITTER RATHER THAN DONATING

"The most notable thing is they wanted privacy. They were harassed. I do believe everything she said," host Sara Haines said.

"They wanted protection, and they wanted to leave that," Haines corrected herself before ultimately agreeing with Navarro. "It’s hard to reconcile the amount of publicity."

"I got to tell you something, if they want is privacy and to get away from the royal family, they’ve got a hell of a way of doing it," Navarro said.

This documentary series will be the second time Harry and Meghan share insight into their life as royals. The pair last went on the record with Oprah Winfrey in March 2021.

They said they wanted to work part time…they only wanted privacy after their request to work part time was denied. THEN and only then did they decide that they had been attacked and the British were racist. If you want privacy shut your door and stop letting people in your house!!!!

California taxpayers may get some extra love given to them in time for Valentine's Day thanks to the final wave of the state's Middle Class Tax Refund.
CALIFORNIA STATE・2 DAYS AGO
WashingtonExaminer

Dr. Phil McGraw and CBS Media Ventures announced Tuesday that the Dr. Phil show will end at the conclusion of its current season.
WASHINGTON STATE・3 DAYS AGO
WashingtonExaminer

Prosecutors have confirmed that a Republican city councilwoman was fatally shot in her car outside her New Jersey home on Wednesday night in what police believe was a planned attack.
SAYREVILLE, NJ・2 DAYS AGO
WashingtonExaminer

A court date has been set.
NEW MEXICO STATE・2 DAYS AGO
WashingtonExaminer

The House of Representatives passed a Republican bill Wednesday afternoon to require hundreds of thousands of federal employees to return to government offices, ceasing many of the work-from-home policies that were allowed throughout the COVID-19 pandemic.
WASHINGTON STATE・2 DAYS AGO
WashingtonExaminer

'What is it with this guy?' Boris Johnson urges GOP to ignore Tucker Carlson on Russia

Fox News host Tucker Carlson has “intimidated” some Republicans with his commentary on the war in Ukraine, according to former British Prime Minister Boris Johnson, who warned against underestimating Russia’s ambitions.
WASHINGTON STATE・2 DAYS AGO
WashingtonExaminer

The White House was adamant it would not negotiate with House Republicans regarding the debt limit before President Joe Biden sits down with House Speaker Kevin McCarthy (R-CA).
WASHINGTON STATE・2 DAYS AGO
WashingtonExaminer

Several Texans are dead and nearly 400,000 people in the state are without power as ice storms are expected to ease up in the South on Thursday.
TEXAS STATE・2 DAYS AGO