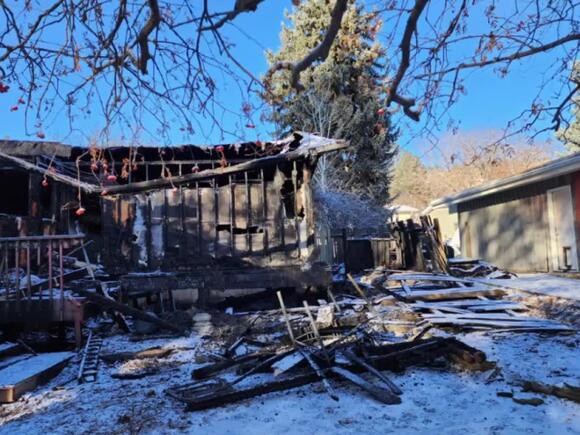 The remnants of the sober living house, Sober Beginnings, are now completely boarded up after the fire left 13 residents homeless and looking for any help the community can provide.

One resident described the scene they experienced Friday morning as "sheer panic and explosions." And mentioned that a "barbecue came through the kitchen from outside" as well.

Fortunately, everyone escaped unharmed but now all who lived there are without a home.

"We don’t know what this looks like going forward. Whether we can get a new house or rebuild the one we have. So, that’s a big question because our job is to keep people off the street and help them stay sober and connected," said Kacy Keith, owner of Sober Beginnings

However, hope is already on the horizon for the group. The Billings community has stepped up in "big way" according to Keith. The residents are currently staying at the SureStay hotel in Billings until the facility can figure out its next steps. And donations have been pouring in.

"I’m just totally overwhelmed with gratitude from people that’ve helped. We have a whole room full of clothes. I don’t know where to even start," added Keith.

And that’s not all.

Before the sun had set Friday, Keith received a call she never expected, from New Day Ranch, a sober living facility in Billings. About a home they have available in Lockwood.

"When we heard this happened, we thought 'you know what? We have room for 13 men in a very workable house that’s vacant right now.' We’re paying the utilities already and it’s like how can we let people who are really striving to lead their lives, how do we leave them alone?" said Sheri Boelter, CEO of New Day INC.

Sober Beginnings is now figuring out its future and "thankful for the generous offer." Thankful to have options.

"We have to really take into account how many people walk places, we’ve had full houses where nobody drove. So, if nobody drives, how do we transfer people to work and meetings and things like that? It's something we have to consider," Keith said.

But Keith said she feels the fear so many felt during the fire, has been replaced by "another feeling." One of thankfulness.

"I’m completely full of gratitude from the Billings community because I’ve gotten so many calls and texts. First and foremost, I’m glad everyone is ok," Keith said.

If you would like to donate, there is a GoFundMe set up for Sober Beginnings. You can also drop men’s clothes, shoes, backpacks, and toiletries off at Groomingdales at the corner of 15th Street West and Central Avenue or at the SureStay Plus Hotel at 3040 King Ave. W.

The citation was filed on Jan. 27 after code enforcement officers spent months trying to contact and work with owner John Skauge on issues plaguing the property at 223 S. 27th St.
BILLINGS, MT・10 HOURS AGO
Q2 News

Have a Billings address? Booking some local hotels may be an issue

While some hotels have a policy in place and show a sign on the front door stating they will no longer book local residents, other hotels practice heavy caution who they book to.
BILLINGS, MT・9 HOURS AGO
Q2 News

Here in Billings, that growth was closer to 1%, but Dannenberg is optimistic. He’s a fourth-generation scouter and has worked professionally with the group since 2005.
BILLINGS, MT・10 HOURS AGO
Q2 News

Their mailbox is on the side of their home, down the driveway. While the fence is closing off all of their front yard.
BILLINGS, MT・1 DAY AGO
Q2 News

The Layhers were leaving Pizza Ranch on Dec. 27 when their SUV was struck by a speeding vehicle on Main Street, causing their vehicle to roll. The mother, Jessica, was just released from the hospital.
BILLINGS, MT・1 DAY AGO
Q2 News

Billings patrol officer talks crime and the code of the job

He tries to maintain professionalism, something he talks about quite a bit when asked about how he deals with the public and sometimes those who target police.
BILLINGS, MT・11 HOURS AGO
Q2 News

The moose wandered into Billings in early September and was euthanized by Fish, Wildlife and Parks on Dec. 1 after appearing to be injured.
BILLINGS, MT・8 HOURS AGO
Q2 News

Construction along Broadway Avenue in Red Lodge is in full swing, as the community attempts to repair the washed-out road before springtime.
RED LODGE, MT・2 DAYS AGO
Q2 News

A man prosecutors say was shot by a woman during an attempted robbery in a Billings alley was arraigned Wednesday in Yellowstone County District Court.
BILLINGS, MT・17 HOURS AGO
Q2 News

Next thing she knew, the skulls she had painted for her wedding in September 2022 had caught peoples attention.
BILLINGS, MT・3 DAYS AGO
Q2 News

Lenette Kosovich, CEO of Rimrock Foundation, to step down at end of year

Parents in west Billings and south of Billings are looking into the possibility of building a new high school.
BILLINGS, MT・7 DAYS AGO
Q2 News

Q2 Billings Area Weather: A shot of showers and snow

“All of sudden it was this big explosion in the sky and all this debris started slowly coming down like it was big smoke," she said.
BILLINGS, MT・5 DAYS AGO
Q2 News

Strong winds continue west of Yellowstone County on what will be another dry day. Chance of precipitation tomorrow as a cold front moves through.
BILLINGS, MT・1 DAY AGO
Q2 News

At Q2, we’re proud to be a part of the 'If You Give A Child A Book' campaign where your donations help get books into the hands of every kid.
HARDIN, MT・5 DAYS AGO