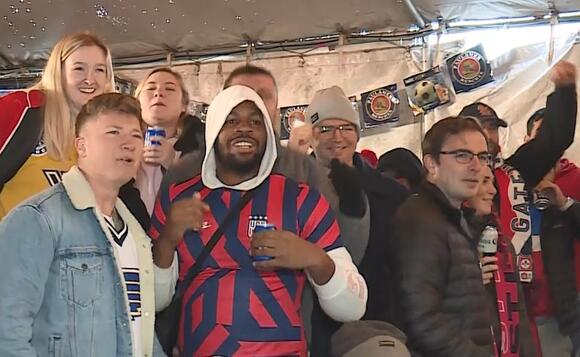 U.S. came up short, losing 3-1 in the do-or-die matchup. Despite the tough ending, many woke up early and gathered at watch parties with optimism.

Conner Shaw and Melvin Wilson went to Amsterdam Tavern on Morgan Ford Road before the sun came up.

“To come into work today and see people ready camping out before I even got to work was pretty cool to see,” said Amsterdam Tavern bartender Jeffrey Shipman. “I’ve never seen that before here.”

A smaller, family-friendly group watched the game at Falcon’s Social Club on Southwest Avenue in the Hill neighborhood. Seven-year-old Jordan Campbell attended the watch party with her dad.

It was the same story for Chaminade High School freshman Nico Thompson.

It was also a full house at Milo’s Bocce Garden.

“There’s nothing like watching soccer on the Hill,” said owner Joe Vollmer.

What started with high hopes ended in a disappointing loss. Fans were hoping the men’s national team could advance past the round of 16 for the first time since 2002. When Netherlands entered halftime with a two-goal lead, reality started sinking in.

Fans and businesses alike seem to be ready to move forward.

“We’re still a huge soccer community, so we will continue to watch all the games come down to watch the games,” Paul Levine, president of Falcon’s Social Club said. “It won’t be the same though, watching with the USA not in it, that’s for sure.”

Employees at Amsterdam Tavern who call themselves the ‘World’s Greatest Soccer Tavern’ plan on closing the street for the final, no matter which teams are playing.

“We’re gonna have one more big game no matter what,” Shipman said. “We’ve got England tomorrow (Dec. 4). “They always bring in a crowd as well, so it should be pretty fun.”

A new suburban stadium could be on the horizon for the Chicago Bears, though it appears some Illinois representatives are not quite on board with that prospect.
CHICAGO, IL・2 DAYS AGO
FOX 2

The aldermen of St. Louis Consider that the goal is to expand the conference center using a portion of the Rams' NFL settlement.
SAINT LOUIS, MO・1 DAY AGO
FOX 2

The Chicago Bears are in the market for a stadium upgrade. When an Illinois politician mentioned it needed to get done or there could be talk about the “St. Louis Bears”,  it seemed like a stretch.  “TKO” The Kilcoyne Opinion says it’s the latest example of the NFL’s stadium escalation game.
CHICAGO, IL・16 HOURS AGO
FOX 2

The food service director for an impoverished south suburban school district is accused of stealing $1.5 million worth of food—mainly chicken wings—according to court documents reviewed by WGN Investigates.
HARVEY, IL・2 DAYS AGO
FOX 2

At the start of Tuesday night, everyone knew there would be a guaranteed millionaire at the Queen of Hearts drawing in Waterloo, Illinois, but no one knew how long it would take.
WATERLOO, IL・1 DAY AGO
FOX 2

While Missouri Amendment 3 permits marijuana use in private residences, it’s still against the law in parks, while walking along sidewalks, and in schools, both private and public.
MISSOURI STATE・2 DAYS AGO
FOX 2

A St. Charles man died after a crash late Monday evening on Interstate 70, according to the Missouri State Highway Patrol.
SAINT CHARLES, MO・2 DAYS AGO
FOX 2

Emergency crews are at the scene of a fatal two-car crash Tuesday morning.
SAINT LOUIS, MO・2 DAYS AGO
FOX 2

Robbers force man to undress at gunpoint, shoot at him in St. Louis

A group of robbers recently forced a man to undress at gunpoint and fired shots at him in north St. Louis.
SAINT LOUIS, MO・5 HOURS AGO
FOX 2

16-year-old killed at East St. Louis church was there with his mother

The pastor at an East St Louis church where a teenager was killed in a shootout on Sunday says he’s never seen violence at the house of worship in his 16-year tenure.
EAST SAINT LOUIS, IL・1 DAY AGO
FOX 2

TKO: Do we have to cheer for the Chiefs?

The Kansas City Chiefs are in the Super Bowl and many local football fans are fired up. But not every football fan in St. Louis supports the Chiefs. “TKO” The Kilcoyne Opinion says to each his own and has a couple ideas that could make the Chiefs more of Missouri’s team.
KANSAS CITY, MO・1 DAY AGO
FOX 2

One of two men convicted of smuggling 100 pounds of methamphetamine to the St. Louis area from Colorado was sentenced Tuesday.
SAINT LOUIS, MO・2 DAYS AGO
FOX 2

A 5-year-old boy is fighting for his life after being shot in the head over the weekend.
SAINT LOUIS, MO・2 DAYS AGO
FOX 2

FLORISSANT, Mo. – A man wanted for stealing vehicles, trailers, construction equipment, tools, and catalytic converters across the St. Louis area is now under arrest. The Florissant Police Department says that Samuel Mudd, 24, faces felony stealing charges. Police found nearly $200,000 worth of stolen property during the investigation. Mudd is a suspect in many […]
FLORISSANT, MO・1 DAY AGO
FOX 2