Average Joe: How Manchin could be just days away from losing his Senate power 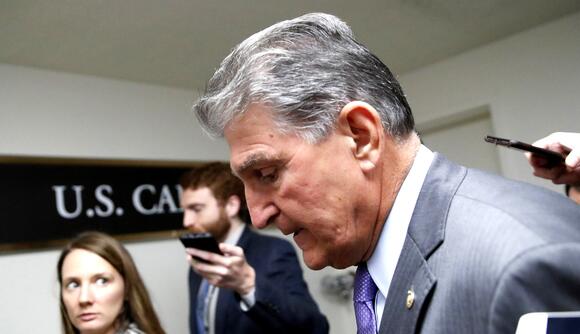 C entrist Sens. Joe Manchin (D-WV) and Kyrsten Sinema (D-AZ) could see their outsize influence over the party wither away after two years of claiming make-it-or-break-it status over the Democrats’ agenda.

Over the last two years, both Manchin and Sinema have acted as gatekeepers of sorts within their own party, often using their votes to negotiate and boost their own priorities in exchange for support on a Democratic bill . Due to the 50-50 split in the Senate, the Democrats couldn’t afford to lose either one of their votes to advance legislation — resulting in drawn-out negotiations or compromises in order to push bills across the finish line.

But with the Dec. 6 runoff in Georgia giving the Democrats a chance to secure a 51-49 majority in the upper chamber, the pair’s control over the party may be coming to an end.

If the Democrats can manage to gain a two-seat majority, along with Vice President Kamala Harris ’s tiebreaking vote, the party would no longer need to rely on courting either Manchin or Sinema for their bills to succeed.

Joshua Huder, a senior fellow at Georgetown University’s Government Affairs Institute, told Newsweek that "I don’t expect Manchin or Sinema to have much influence to be quite honest. To the degree that they do have influence, it’ll be much more in the vein of the infrastructure bill-type influence."

Manchin has long acted as a thorn in the Democrats’ side over the last two years, often requiring lawmakers to make significant changes to their proposals or to drop provisions altogether in order to get the West Virginia Democrat on board. One recent example is the passage of the Inflation Reduction Act, which narrowly passed the Senate 51-50 with Harris’s vote.

Democrats were able to secure Manchin’s support after Senate Majority Leader Chuck Schumer cut a deal to include an energy permitting bill, one of Manchin’s top legislative priorities, to the annual government funding bill in exchange for his support of the Inflation Reduction Act. Manchin later withdrew the proposal from the funding bill due to a lack of support.

Sinema has also posed challenges to her own party, often using her position as a centrist to elevate herself as a key negotiator between Republicans and Democrats when it came to drafting legislation. In that position, Sinema would often pull legislation as far to the right as necessary to get Republicans in both the Senate and the House on board.

However, a 51-49 Senate in favor of Democrats would partially strip Sinema of that power, as any legislation that makes its way to the upper chamber will already have been approved by the GOP-led House after Republicans take control of the lower chamber in January.

For the two to remain powerful, they would both need to break from their party on the same piece of legislation in order to sink it — and that, in and of itself, is fairly unlikely. The two rarely find themselves voting as a bloc, and the two senators have different priorities and agendas.

Despite being the two of the most conservative Democrats in the Senate, they vote with President Joe Biden and the rest of the party most of the time. Manchin sides with Biden’s policies roughly 89% of the time while Sinema does so 95% of the time , according to a political analysis from FiveThirtyEight.

The article implies that they do not present themselves as a voting block, that is actually what they do. They will continue to stop the progressives of the democrat in doing away with the filibuster and that is what will control Chuckie and his senate. Manchin will never become a Republican but an independent is not out of the question.

The National Democratic party should punish any elected member that switch party to reenbolse all the money that the party spend electing them they were elected by Democratic people.

They both traitors of Democracy🇺🇸They both need to be gone, I vote 💙🇺🇸 no matter who with a brain, and compassion for people, not pockets🙋‍♀️

The White House was adamant it would not negotiate with House Republicans regarding the debt limit before President Joe Biden sits down with House Speaker Kevin McCarthy (R-CA).
WASHINGTON STATE・1 DAY AGO
WashingtonExaminer

Democrats reacted harshly to the decision of Republicans on the Ways and Means Committee to add the word “welfare” to the name of a subcommittee.
WASHINGTON STATE・2 DAYS AGO
Business Insider

McKay Coppins, a journalist at The Atlantic, said he was "taken aback" by how often he heard MAGA Republicans say they wish Trump was dead.
MICHIGAN STATE・1 DAY AGO
WashingtonExaminer

Essential Connecticut workers who worked through the COVID-19 pandemic are set to receive a payment worth up to $1,000 on Feb. 1.
CONNECTICUT STATE・1 DAY AGO
Victor

The Social Security Administration's first round of retirement payments for the month of February, worth up to $4,194, will begin being issued to recipients starting next week.
11 HOURS AGO
WashingtonExaminer

A group of Republican senators introduced a bill that would eliminate the possibility of government shutdowns by requiring Congress members to stay in Washington, D.C., until agreements are made on the annual budget.
WASHINGTON STATE・12 HOURS AGO
TheDailyBeast

MAGA-boosting radio host John Fredericks has turned on Donald Trump, telling the former president in no uncertain terms on Tuesday that “nobody cares” about his petty media feuds and “grievances” anymore.Fredericks, a longtime supporter of the twice-impeached ex-president, largely took issue with how Trump has seemingly ignored political issues while focusing his attention on far-fetched lawsuits and complaints about “fake news.” Additionally, Fredericks grumbled about Trump privately backing Ronna McDaniel in her successful re-election bid for Republican National Committee chair.“President Trump is going to do what he wants,” Fredericks declared in a clip first flagged by Raw Story. “I think...
2 DAYS AGO
Newsweek

On Saturday Haley tweeted: "It's time for a new generation to lead."
SOUTH CAROLINA STATE・1 DAY AGO
WashingtonExaminer

The White House defended its failure to disclose an FBI search of President Joe Biden’s think tank in the weeks after the president’s attorneys found classified documents at the site.
WASHINGTON STATE・2 DAYS AGO
WashingtonExaminer

People are more convinced that former President Donald Trump knew he had classified documents inside his personal residence compared to those who believe the same thing about President Joe Biden, according to a new poll.
DELAWARE STATE・1 DAY AGO