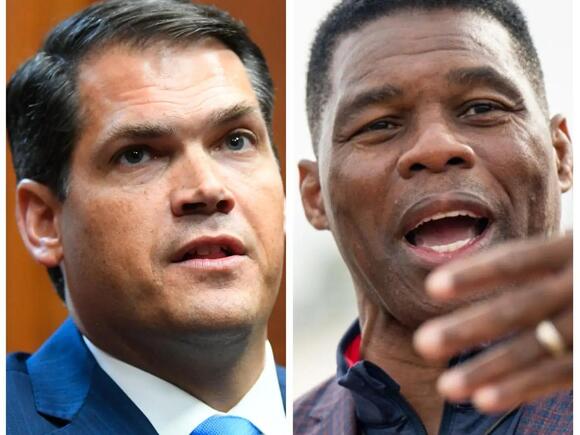 Outgoing Georgia Republican Lt. Gov. Geoff Duncan said in a recent interview that Trump-backed Senate candidate Herschel Walker will likely become "one of the worst candidates in our party's history."

"I'm a conservative. I'm a conservative because I feel like it's the best way to govern. I've been a Republican a lot longer than a lot of folks. I think I've got kids probably that could articulate the conservative platform better than some of the candidates that Donald Trump and his group supported all across the country," he told the news outlet.

"This wasn't the right brand for Republicanism," he continued to say, "and I think Herschel Walker will probably go down as one of the worst candidates in our party's history.

While Republicans have largely lined up behind Walker, the former University of Georgia football standout struggled last month compared to the other statewide Republican candidates, who all won their respective races.

Last month, Walker earned 48.5% of the vote compared to Warnock's 49.4% in the general election, which forced a December 6 runoff as no candidate hit the requisite 50% of the vote needed for an outright victory.

Led by GOP Gov. Brian Kemp's reelection victory over Democrat Stacey Abrams, Georgia Republicans had an overwhelmingly successful election cycle, despite the party faltering on the national level — regaining a House majority, albeit narrow, while losing key races that denied them a Senate majority.

Republicans during the general election pushed the narrative that Walker's win would deny Democrats two more years of their majority in the upper chamber. However, with Democrats set to control the upper chamber irrespective of the results of the Georgia runoff, the GOP argument that a 50-50 Senate — still controlled by Democrats — would give them an even-split of committee assignments lacks the saliency of gaining full control of the chamber.

Warnock's victory would give Democrats a 51-49 majority, allowing them to forgo power-sharing agreements currently in place and affording them more seats on committees, therefore making it easier to approve President Joe Biden's judicial nominees and any Cabinet officials.

But despite the continued GOP effort to produce a Walker victory in the December 6 runoff, Duncan expressed to CNN earlier this week that he just couldn't cast a ballot for the Republican nominee.

"I was one of those folks who got in line and spent about an hour waiting, and it was the most disappointing ballot I've ever stared at in my entire life since I started voting," he told the network. "I had two candidates that I just couldn't find anything that made sense to put my vote behind. So I walked out of that ballot box, showing up to vote but not voting for either one of them."

Walker has been dogged by allegations that he paid for women to have abortions in the past, which he has vehemently denied.

Last month, the Republican nominee spoke about werewolves and vampires during a campaign rally, which has mystified some voters.

Duncan, who did not run for reelection and will be succeeded by Republican Lt. Gov.-elect Burt Jones in January, said earlier this year that he would focus on the GOP 2.0 independent movement to broaden the Republican coalition after the end of his term.

In his 2021 book, " GOP 2.0 ," Duncan wrote of the need for a more independent and inclusive party, while also pointing out the consequences of conservative misgivings about election administration, which he said included Republicans losing the two GOP Senate seats formerly held by David Perdue and Kelly Loeffler in last year's January runoffs.

While in office, Duncan stood behind Kemp's refusal to entertain Trump's push to overturn the 2020 presidential election results in Georgia, while also praising GOP Secretary of State Brad Raffensperger for defending the integrity of the vote in that year's elections.

but if Herschel doesn't win, whose gonna make sure our good air doesn't get shipped to China? I know he can do it because he graduated top of his class in Georgia..... c'mon man... it's embarrassing to put him in front of a mic and allow him to speak. Oh and please explain the werewolf and whatchamacallit again.....Sad.

That is IMPOSSIBLE your party already SUPPORTED THE ONLY PRESIDENT TO COMMIT TREASONOUS SEDITION WHEN HE SENT YOUR BASE TO ATTACK AMERICA IN HIS NAME !! The same self centered EGOMANIAC that ALLOWED COVID-19 to RUN UNCHECKED FOR THREE MONTHS !! As he REPEATEDLY told AMERICA that it was NOTHING MORE THAN DEMONCRATIC HOAX DESIGNED TO HURT HIS PRESIDENCY!!!! Mr Walker is obviously out of his scope running as a politician but then Republicans have always used people who have a following like actors with no political history but plenty of people who know them !! Your party if not all Republicans (I choose to believe there is still plentyof AMERICANS in the new gop)has taken an extreme right turn and are desperate to make the democrats out as having a socialist agenda YET NO DEMOCRAT HAS EVER REFUSED THEIR LOSS AND THEN PUSHED THEIR FOLLOWERS TO ATTACK AMERICA FROM WITHIN!!

Walker is illiterate. He has Zero political experience, he can't speak correctly, he lies about the abortions, he talked about werewolves, and other nonsense. Why are ppl rationalizing that this clown would be a good candidate?Get real!

Rep. Marjorie Taylor Greene said that working in Congress has made her life "miserable" for various reasons, including that she has lost money.
GEORGIA STATE・15 HOURS AGO
WSB Channel 2 Atlanta

Ex-Romney strategist Stuart Stevens on MSNBC blasted Nikki Haley for her expected White House bid. "No one else really embodies sort of the collapse of the party as well as Nikki Haley," he said. Haley, a former South Carolina governor, served as the US Ambassador to the UN under Trump.
SOUTH CAROLINA STATE・13 HOURS AGO
Business Insider

"If and when it passes, I will happily, happily comply. I've never said I'm going to unilaterally comply," Cruz told CBS of running for a third term.
TEXAS STATE・9 HOURS AGO
Business Insider

John Fetterman has taken DC by storm, drawing awestruck colleagues to his side and garnering praise from Democratic leaders who suspect he'll go far.
PENNSYLVANIA STATE・1 DAY AGO
Business Insider

Conservative groups are flooding the Supreme Court with calls to block Biden's student-loan forgiveness, arguing that borrowers are 'contractually bound to repay their loans'

Indiana's Senate race will show the depths of the fault lines within the GOP. Early signs show it's still Trump's party.

In the GOP of yesteryear, Mitch Daniels would've been a shoo-in for the Senate. His decision to skip the race leaves the GOP with some big questions.
INDIANA STATE・1 DAY AGO
Business Insider

"There were tears coming down from his eyes. He said: 'If you endorse me, I'll win,'" Trump said of DeSantis.
FLORIDA STATE・2 DAYS AGO
Business Insider

Count on a springtime re-election announcement for Biden if he follows Trump, Obama, Bush and Clinton's examples

Bill Clinton, George W. Bush, Barack Obama and Donald Trump announced their re-election bids between April and June in the year before the election.
WISCONSIN STATE・1 DAY AGO
Business Insider

George Santos' first House race took days to call in 2020. So he came to DC for new member orientation and had a blast before finding out he lost.

According to the congressman's Instagram, he learned of his 2020 election loss to Democrat Tom Suozzi while on a tour of the Lincoln Memorial.
WASHINGTON, DC・14 HOURS AGO
Business Insider

Trump campaign staff discussed plan to 'fan the flame' about election fraud despite privately admitting 2020 defeat to Biden, according to audio leak

Audio obtained by AP provides insight into the disconnect between Trump aides' private beliefs and public claims about the 2020 election.
WISCONSIN STATE・1 DAY AGO
Business Insider

The US promised the Cherokee Nation a seat in Congress in a treaty that fueled the Trail of Tears. 188 years later, the Cherokee say lawmakers may finally fulfill that promise.

Seating a Cherokee in Congress would show that the US is capable of keeping its word to tribes, Kim Teehee, the proposed delegate, told Insider.
GEORGIA STATE・1 DAY AGO
Business Insider

"Do you see Joe Biden on Air Force One doing seven, eight campaign stops a day at 82 years old?" Christie asked on Sunday on ABC's "This Week."
6 HOURS AGO
Business Insider

Eight members of Georgia’s congressional delegation have launched a push to have the Okefenokee National Wildlife Refuge designated a UNESCO World Heritage Site. The seven Democrats and one Republican urged the Interior Department in a letter this week to nominate the Okefenokee for the designation, an important step in winning UNESCO approval. “The Okefenokee is […] The post Georgians in Congress renew push to designate Okefenokee a World Heritage Site appeared first on Rough Draft Atlanta.
GEORGIA STATE・1 DAY AGO