There's A Big Debate On Whether IHop Or Denny's Has A Better Pancake, So We Did The Ultimate Test To See Who Officially Tastes The Best 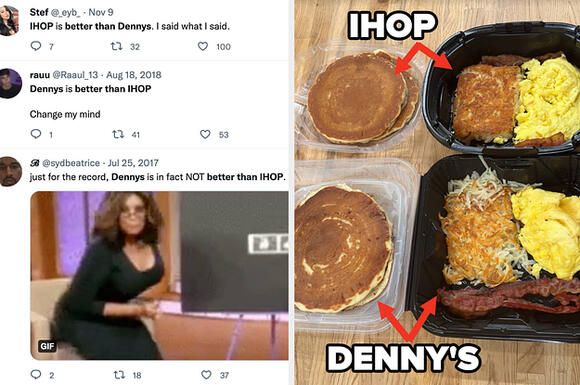 Food debates are and will always be a huge topic. And, we recently stumbled upon quite the debacle over who has the better breakfast: Denny's or IHOP.

So, as the ones who discovered that the Big Mac ranks supreme over the Whopper , we're back. We are Chris and Krista, and we have made it our mission to find the best-tasting menu items from food chains, according to taste, presentation, and value.

First and foremost, let's just take a second to look at the glorious items going head-to-head today. They may LOOK similar, but do they TASTE similar?!

Let's dive into the ~scientific specifics~.

Here is what our Denny's breakfast meal (they call it the Build Your Own Grand Slam® ) looks like IRL vs. their promo shot:

And, surprisingly, IHOP doesn't have a breakfast meal that offers the same things as Denny's. The closest thing we could find was called the 2 x 2 x 2 , but we had to add shredded hashbrowns. Here's what it looked like IRL vs. IHOP's promo shot:

In terms of appearance, here's how we rated them...

Let's talk about what you're getting for your money. First, Denny's breakfast costs $15.06.

Meanwhile, IHOP costs $20.39. These items were both ordered from delivery apps, so that may have resulted in a higher cost than you'd experience by dining in or picking up yourself, but these amounts listed do NOT include tax or delivery fees.

Since all of the items were so similar, we specifically honed in on each establishment's pancakes. As you can see, Denny's (on the left) has a heavier pancake, weighing 1.5 more ounces than the IHOP pancake.

Also, as suspected, Denny's has a wider pancake by nearly an inch. The Denny's pancake has a circumference of about 6.5", and the IHOP one is about 5.75".

Here are our VALUE ratings:

CHRIS: Denny's cost $5.33 more AND had the larger pancake? While I think as a general rule, breakfast should be cheap because I've experienced too many local diners that only charge, like, $7 for a whole, hearty breakfast, this is an easy victory for Denny's because five bucks is a significant chunk extra to pay for IHOP.

KRISTA: I think it's pretty obvious Denny's wins on value here. Their pancake was actually a lot bigger than I initially thought just eye-balling it, and I give a tip of the hat to them for the price — even though I still think $15+ is pretty expensive, it's still cheaper than IHOP by quite a bit. Kudos, Denny's!

Let's dive right in with our thoughts on Denny's!

We also knew our thorough taste test wouldn't be complete without some thoughts on their butters and syrups:

For reference, here is the Denny's syrup...

And here is the IHOP:

In the end, our stomachs hurt, but our hearts were full, and we were definitely ready with a decision of who reigned supreme...so without further ado: IHOP!!!!!

It's time for YOU to to weigh in..

"It's So Prohibitively Expensive": People Are Sharing The Grocery Store Staples That Are Basically Unaffordable These Days

There's a solid chance you're paying a lot more for groceries than you need to. Here's how to save some extra cash.
3 DAYS AGO