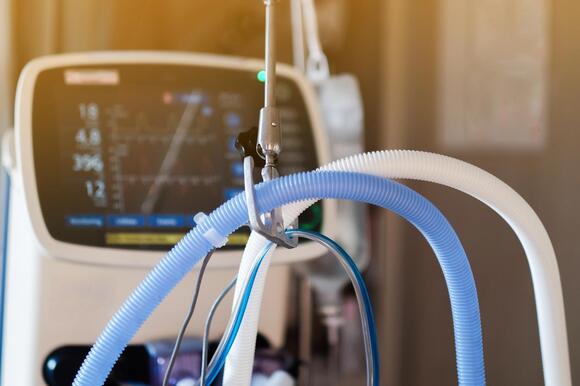 BERLIN (AP) — A 72-year-old woman has been arrested after she allegedly switched off a hospital roommate’s ventilator — twice — because she was annoyed by the sound it made, authorities in Germany said Thursday.

The woman was jailed on suspicion of attempted manslaughter following the incident at a hospital in the southwestern city of Mannheim on Tuesday evening.

Why are so many people sick right now?

Police and prosecutors said in a statement that the suspect is alleged to have switched off a 79-year-old woman’s ventilator and, despite then being told by staff that it was vital for the patient, switched it off again later in the evening.

The older patient had to be revived and, while her life is not in danger, still requires intensive care, authorities said.

The suspect was brought before a judge on Wednesday and taken to jail.

Authorities investigating the killing of Microsoft executive Jared Bridegan said they are preparing to make an arrest in the case nearly a year after the shocking murder, First Coast News reported.
JACKSONVILLE BEACH, FL・2 DAYS AGO
WFLA

Police say the woman overheard the man's conversation, which included incriminating statements such as "I killed those people."
YAKIMA, WA・1 DAY AGO
WFLA

Police and firefighters responded to the home just after getting a 911 call from a male resident who reported the woman jumped out the window, Cruz said. A 5-year-old girl, Dora Clancy, and her 3-year-old brother, Dawson Clancy, were pronounced dead at a hospital, he said. A 7-month-old boy was flown to a Boston hospital for treatment.
DUXBURY, MA・4 HOURS AGO
WFLA

A Sarasota police officer was injured after the suspect she was helping arrest bit her on the hand, according to body cam video released by the Sarasota Police Department.
SARASOTA, FL・2 DAYS AGO
WFLA

Florida woman calls 911 on I-10; man charged with kidnapping

Virginia woman rolls her husband over 39 times with her SUV after waking him up to see her grandmother in bed with him.

Last night in Richmond, Virginia, a lady who discovered her husband having sex with her own grandmother reacted violently, carelessly driving over him with her car and repeatedly rolling over his body.
RICHMOND, VA・4 DAYS AGO
Majestic News

A Florida woman was arrested on the charge of child neglect after she allegedly left her boyfriend’s 7 –year-old son in a cold bath for 12 hours before his death. Reports say the woman who was later identified as 33-year-old Shantay Belcher made a 911 call and reported about her boyfriend’s 7-year-old son Kyrie Gordon was “Unresponsive”
4 DAYS AGO
News Tender

The Chichijima Incident, also known as the "Murasaki" incident, was a real historical event that occurred during World War II in which American airmen were captured by the Japanese and killed.
2 DAYS AGO
The Independent

A teacher dismissed in a row over transgender pronouns has been arrested after he returned to the school.Enoch Burke, previously jailed after failing to observe a court injunction banning him from attending Wilson’s Hospital school in Co Westmeath, Ireland, when he was suspended from work, was informed last Friday of his dismissal from his position as teacher.The evangelical Christian was suspended from work on full pay last year pending the outcome of a disciplinary process, after a number of incidents stemming from the transgender row.Mr Burke voiced on several occasions his opposition to a request from the secondary school’s...
2 DAYS AGO
The US Sun

THE estranged wife of a trans rapist sent to an all-female jail said yesterday: “It’s a sham for an easier life.”. Shonna Graham said gender-switch Isla Bryson never mentioned feeling he was in the wrong body. It comes as Bryson, 31, switched gender after appearing in the dock...
22 HOURS AGO
WFLA

Residents in the Florida Keys found nearly $2 million worth of packaged cocaine Monday, according to authorities.
BIG PINE KEY, FL・2 DAYS AGO
William

Raping of a 23-year-old Woman: The Security Camera Footage That Could Convict Dani Alves of Alleged Act

The Brazilian player has been detained in Sant Esteve Sesrovires jail since last Friday on remand without bail after being charged with raping a 23-year-old woman in a nightclub's restroom. And more information about what allegedly occurred between the complainant and soccer star, Dani Alves, in a nightclub bathroom in Barcelona, on the night of December 30, 2022, keeps coming to light.
2 DAYS AGO
Andrei Tapalaga

In 1968, when she was barely 11 years old, Mary Bell was found guilty of the murder of two little boys in England. The case received extensive media coverage and sparked great public indignation. Bell killed Martin Brown, 4, by strangling him in a vacant home in Newcastle upon Tyne's Scotswood district in May 1968. She carried out a similar murder one month later on three-year-old Brian Howe. Bell was detained and accused of the killings along with Norma Bell, a 13-year-old accomplice (not related to Bell).
1 DAY AGO
WFLA

A customer in Wisconsin tweeted out a photo of in-store signage that suggested the change would be taking place at different times in different regions.
WISCONSIN STATE・2 DAYS AGO
WFLA

A police K-9 in Michigan recently had himself a 'ruff' day after he was accused of stealing his owner's lunch.
WYANDOTTE, MI・1 DAY AGO
San Herald

A vehicle in which they were riding was fired upon on Sunday night, killing a Texas couple who had been together since middle school and were expecting their first child. The shooting, which San Antonio police chief William McManus described as a "targeted hit," happened at the junction of Olive Street and Aransas Avenue, he said during a press conference on Sunday. There have been no detentions.
SAN ANTONIO, TX・1 DAY AGO
WFLA

3 people shot blocks away from crash in Bradenton

The Bradenton Police Department is investigating a shooting that took place near the intersection of 10th Avenue West and South Tamiami Trail Monday evening.
BRADENTON, FL・2 DAYS AGO
WFLA

One lucky Florida Lottery player is going home with $1 million after winning a second-place prize from the Mega Millions drawing held on Tuesday.
FORT MYERS, FL・1 DAY AGO
WFLA

A 15-year-old girl was seriously hurt after she was hit by a car in Bradenton on Monday night.
BRADENTON, FL・2 DAYS AGO
WFLA

Hernando County deputies arrested a motorcyclist Monday afternoon after he allegedly attacked a family in a road rage incident, according to new information from authorities.
HERNANDO COUNTY, FL・2 DAYS AGO