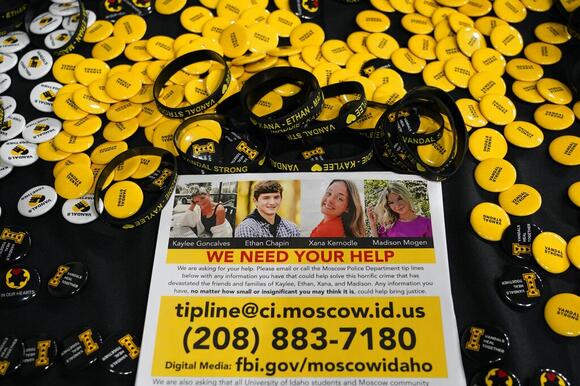 A student at the University of Idaho reported strange footprints that were found near her home located less than a mile away from the off-campus house where four students were killed last month.

A university student reported footsteps in the snow leading up to her back patio that weren’t present when she left her home to go to class around 1 p.m. on Wednesday, according to a police report.

The tip comes as police have reported a significant increase in the number of 911 calls claiming “unusual circumstances” and requests for welfare checks as students grapple with the quadruple stabbings that occurred on Nov. 13. Police have not identified a suspect or retrieved a weapon despite investigators collecting more than 100 pieces of physical evidence and over 4,000 photos and 3D scans of the home, according to officials.

Four students, identified as Ethan Chapin, 20, Xana Kernodle, 20, Madison Mogen, 21, and Kaylee Goncalves, 21, were slain on Nov. 13. Each was killed in bed and stabbed in the chest and upper body with a large knife.

As of Sunday, law enforcement officers have gotten 78 calls for unusual circumstances and 36 welfare check requests from family members since the Nov. 13 attack, officials said. That’s an increase from the 70 calls and 18 welfare checks that were received throughout the duration of October.

Officials in Moscow, Idaho, initially reported that they believed the deaths were the result of an “isolated, targeted attack” by someone who had “specifically looked at this residence.” However, police backtracked on these statements on Wednesday, explaining they resulted from a “miscommunication” with the Latah County Prosecutor’s Office.

“Detectives do not currently know if the residence or any occupants were specifically targeted but continue to investigate,” city officials said in a statement on Wednesday.

Investigators further clarified the next day, releasing a statement noting that "we remain consistent in our belief that this was a targeted attack, but investigators have not concluded if the target was the residence or if it was the occupants."

Police are asking the community to submit tips or any possibly relevant information by calling 208-883-7180 or emailing tipline@ci.moscow.id.us.

The Idaho police need to bring outside enforcement that is more familiar with this kind of murders. A small town isn’t familiar with how to do things. The longer they wait the less they will find. 😢

I feel so sad for these students and families. Lord please let them find whomever is responsible for this Devilish Act 🙏😢

I believe the 2 who made the 911 call, were probably still hung over from the night before, just woke up, became scared, called friends, maybe for reassurance. Remember, these are kids, not thinking like grown adults. I believe the killer may not have known, which bed the targeted one was sleeping in. May have stabbed the wrong ones first, realized mistake and completed the murders. Remember the one girl had defense wounds. She may have been awaked, and tried to protect herself. l believe the killer is someone, who knew them. Maybe had been rebuffed by one of the victims or perhaps bullied. I believe there is more info known by LE, but cannot be given out at this time. Could jeopardize the case. And it takes time to get DNA, evidence, testing, etc, results back. Caution thrown to the wind, has let many guilty ones, go free. Patience is hard at times like these, but necessary.

Three U.S. tourists were stabbed in Puerto Rico on Monday morning after filming at a hamburger stand in a neighborhood made famous in the popular "Despacito" music video, authorities said.
SOUTH CAROLINA STATE・1 DAY AGO
WashingtonExaminer

State of the Union 2023: Scalise invites coroner as guest to highlight fentanyl deaths

House Majority Leader Steve Scalise (R-LA) will bring a local coroner from Louisiana as his guest to President Joe Biden’s State of the Union address in an attempt to highlight the rise in fentanyl deaths nationwide.
LOUISIANA STATE・1 DAY AGO
WashingtonExaminer

Sens. Mark Warner (D-VA) and Tim Kaine (D-VA) urged the Virginia state legislature on Monday to repeal an amendment in the state constitution that bans same-sex marriage in the commonwealth.
VIRGINIA STATE・7 HOURS AGO
WashingtonExaminer

Freshman Rep. Juan Ciscomani (R-AZ) returned over and over to the theme of the American dream in the Spanish-language GOP response to President Joe Biden's State of the Union address.
ARIZONA STATE・12 HOURS AGO
WashingtonExaminer

State of the Union: Abortion opponents object to claims about Jill Biden guest

As lawmakers settle into their committee assignments in the new Congress, Republicans from a handful of states have emerged as big winners after they were placed on some of the chamber’s most powerful panels.
FLORIDA STATE・1 DAY AGO
WashingtonExaminer

Mountain pressure: Manchin 24 points behind GOP rival in poll ahead of 2024

Sen. Joe Manchin (D-WV) is set for a tough reelection bid in 2024, with one of the top possible candidates far ahead of him in statewide approval ratings.
WEST VIRGINIA STATE・1 DAY AGO
WashingtonExaminer

Stimulus update: California direct payment worth up to $1,050 to be sent in just seven days

There is only one week remaining before the final wave of the Middle Class Tax Refund will be paid to all California taxpayers, completing the payment's run and paying all recipients.
CALIFORNIA STATE・1 DAY AGO
WashingtonExaminer

Sen. Rick Scott (R-FL) called President Joe Biden a “liar” after the president attacked an 11-point agenda the Florida Republican released last year that would sunset all federal laws after five years unless Congress votes to extend them.
FLORIDA STATE・19 MINUTES AGO
WashingtonExaminer

Stimulus update: Final wave of refund payments worth up to $1,050 to be issued within eight days

The final wave of the Middle Class Tax Refund will be paid to all California taxpayers in eight days.
CALIFORNIA STATE・1 DAY AGO
WashingtonExaminer

Stimulus update: Nine days left to claim checks worth up to $800 in South Carolina

South Carolina residents have nine days to file their 2021 taxes and receive a rebate of up to $800.
SOUTH CAROLINA STATE・1 DAY AGO
WashingtonExaminer

Failed Senate candidate Mandela Barnes is reportedly set to launch a new political action committee targeted toward boosting Democratic candidates who are at risk of being written off by the party establishment.
WISCONSIN STATE・1 DAY AGO
WashingtonExaminer

The deadline for South Carolina residents to file their 2021 taxes and receive a rebate of up to $800 will arrive in only eight days.
SOUTH CAROLINA STATE・1 DAY AGO
WashingtonExaminer

Former Gov. Asa Hutchinson (R-AR) is likely to announce his decision on whether he’ll run for president in April, the prominent Republican said earlier this week.
ARKANSAS STATE・1 DAY AGO
WashingtonExaminer

Sen. Joe Manchin (D-WV) left the door open to a White House run in 2024, teasing that while he could be the centrist candidate voters are looking for, there are “a lot of different players in the game.”
WEST VIRGINIA STATE・22 HOURS AGO