Lake runs dry: What is next for much-hyped MAGA star after Arizona defeat 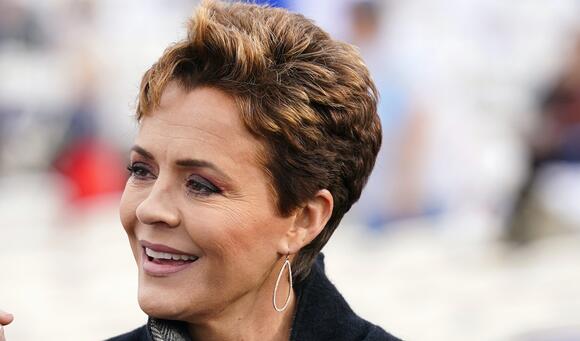 A rizona GOP gubernatorial candidate Kari Lake is reportedly preparing to file a lawsuit to challenge her midterm loss , marking the latest election drama in the Grand Canyon State as it works to certify its results next week.

Lake, who lost by just 0.5 of a percentage point to Democratic Secretary of State Katie Hobbs, is planning to sue Arizona’s largest county to overturn her election loss, alleging several voters were unable to vote on Election Day because of problems with ballot machines , sources told Time. The Republican candidate has refused to concede the race more than three weeks after Election Day, claiming these problems unfairly cost her the race.

The lawsuit comes after Maricopa County experienced a number of technological challenges on Election Day, resulting in long lines and widespread confusion at a number of polling places. The county began reporting problems with its printer settings on the afternoon of Election Day after some ballot tabulators began malfunctioning, prompting election officials to tell voters to either wait for the machines to come back online or to vote at another location.

However, county officials rejected claims that voters were denied the right to vote as election workers sorted out the problems, noting any voter who wanted to submit their ballot was able to do so.

“People were still able to vote,” said Bill Gates , the chairman of the county’s Board of Supervisors. “It was just a matter of maybe not voting in the way they wanted to.”

Lake’s lawsuit is likely to allege that the problems with Maricopa’s voting machines disproportionately affected Republicans, according to Time, as GOP voters are more likely to vote in person on Election Day compared to Democrats, who are more likely to cast their ballots early.

The Republican candidate spent much of her campaign reiterating claims from former President Donald Trump that mail-in ballots make elections susceptible to voter fraud, specifically causing his loss to President Joe Biden in 2020.

Lake is reportedly planning on asking the Maricopa County Superior Court to nullify the midterm election results and hold it again — a ruling that would be unprecedented in modern U.S. elections. Some of the Republican candidate’s top advisers have acknowledged the lawsuit is a long shot, noting it will be “tough” to prove.

“Courts require proof,” a Lake insider told Time . “And it’s going to be hard to prove. You don’t know how many people actually drove to a polling location, looked at the long line, and left. You’ll never know who decided not to pull in. And that’s unfortunate for Kari. We can just argue common sense. But that’s not evidence in court. It’s going to be tough.”

Arizona is set to certify its election on Monday when the governor, the attorney general, the secretary of state, and the chief justice meet to validate and finalize the results. Once that is complete, candidates are then able to file lawsuits challenging the results.

At least one other candidate is likely to sue over the state’s election results, with GOP attorney general candidate Abraham Hamadeh and the Republican National Committee saying the results of his race were “afflicted with certain errors and inaccuracies” that caused the Republican to lose. Hamadeh sued over the results late last month, but a judge rejected the suit, noting it was filed prematurely.

I am so glad she lost. if she were governor, think of all the mud she'd be dragging the state of Arizona through by filling the courts with b/s lawsuits

she is like a little kid in the sandbox, pouting because she didn't get her favorite toy. Grow up you lost. Shake hands and go play in another playground

Lake lost by over 17,000 votes. She needs to put on her big girl pants and stop whining. Hamadeh on the other hand lost by only a little over 500 votes so he has a slim chance with a recount.

Arizona's Kari Lake could be in hot water after posting pictures of 16 voter signatures on social media as part of her quest to prove her gubernatorial race was rigged.
ARIZONA STATE・2 DAYS AGO
WashingtonExaminer

(The Center Square)- As six states wait for California to join its Colorado River Basin water use agreement, Arizona Sen. Kyrsten Sinema called on the state to be willing to seal the deal.
CALIFORNIA STATE・1 DAY AGO
WashingtonExaminer

Larry Elder considering 2024 White House run, says it wouldn't be to 'derail' anyone

Conservative talk radio host Larry Elder hinted he might get involved in a White House run in 2024, nearly two years after he unsuccessfully ran for governor of California.
CALIFORNIA STATE・1 DAY AGO
WashingtonExaminer

Gov. Ron DeSantis (R-FL) dismissed an idea proposed by Sen. Rick Scott (R-FL) that states should return unused COVID-19 funds to the federal government to pay off the national debt, saying that federal officials should worry about keeping "their house in order."
FLORIDA STATE・2 HOURS AGO
WashingtonExaminer

Sen. John Kennedy (R-LA) is seeking to scrap the Biden administration's rule-tightening on pistol-stabilizing braces. He decries the crackdown as a breach of the Second Amendment.
LOUISIANA STATE・1 DAY AGO
WashingtonExaminer

As Rep. Elise Stefanik (R-NY) is set to serve on the House Select Subcommittee on the Weaponization of the Federal Government, her role on the panel could push her to a higher office for 2024.
FLORIDA STATE・2 HOURS AGO
WashingtonExaminer

Gov. Jim Justice (R-WV) said he will decide by the end of February whether or not he will run for Senate in 2024.
WEST VIRGINIA STATE・5 HOURS AGO
WashingtonExaminer

Florida lawmakers have introduced legislation that would lower the state's requirement for a convicted criminal to be sentenced to the death penalty.
FLORIDA STATE・4 HOURS AGO
WashingtonExaminer

Rep. Chip Roy (R-TX) called on Congress to consider repealing a 1994 law that bars obstructing the entrance to abortion clinics in the wake of the acquittal of Mark Houck, a Pennsylvania anti-abortion activist.
PHILADELPHIA, PA・1 DAY AGO
WashingtonExaminer

The Satanic Temple announced plans to launch a virtual abortion clinic that will provide abortion-inducing drugs by mail to women in New Mexico who are no more than 11 weeks pregnant and at least 17 years old.
NEW MEXICO STATE・18 HOURS AGO
WashingtonExaminer

Texas Attorney General Ken Paxton (R) will be required to go through an ethics litigation battle by the state bar due to a lawsuit he brought challenging the 2020 election results in multiple battleground states, a judge ordered on Friday.
TEXAS STATE・2 DAYS AGO
WashingtonExaminer

Stimulus update: 14 days to claim checks worth up to $800 in South Carolina

There are two weeks left for South Carolina residents to file their 2021 taxes and receive a rebate of up to $800.
SOUTH CAROLINA STATE・21 HOURS AGO
WashingtonExaminer

George Santos to recuse himself from House committee assignments

Embattled House GOP Rep. George Santos (R-NY) told his GOP colleagues he is recusing himself from his committee assignments during a closed-door conference meeting on Tuesday, per two sources in the room.
WASHINGTON STATE・2 DAYS AGO