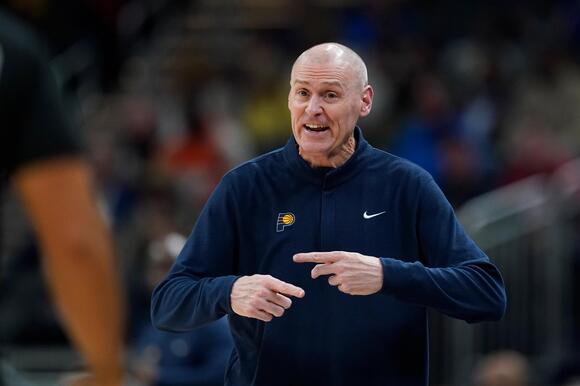 SALT LAKE CITY (AP) — Lauri Markkanen had 24 points and 13 rebounds to lead the Utah Jazz to a 139-119 victory over the Indiana Pacers on Friday night.

Rookie center Walker Kessler scored a career-high 20 points on 7-of-7 shooting and grabbed 11 rebounds for Utah. Jordan Clarkson had 19 points and Collin Sexton added 18 as the Jazz shot 55% from the field and matched a season high for points.

Utah never trailed over the final three quarters and led by double digits throughout the second half.

“I thought our guys maintained their aggressiveness,” Jazz coach Will Hardy said. “Our pace didn’t slow down.”

Myles Turner scored 18 points to lead Indiana. Tyrese Haliburton and Jalen Smith added 14 apiece, but the Pacers lost for the third time in four games on their road trip.

“We’re not playing with the right intentions and we’re not moving the ball,” coach Rick Carlisle said. “The things that have gotten us to the point where we’ve been a surprise team and second in the league in passes — those things failed us tonight.”

Utah used efficient offense and stingy defense to take control before halftime. The Jazz shot 63% from the floor in the first half and made nine 3-pointers. They held the Pacers without a basket for three minutes in the first quarter to build a 35-21 lead.

Indiana erased the deficit in the second, tying it on Smith’s layup, but Utah didn’t let the Pacers go in front. Jarred Vanderbilt and Clarkson scored three baskets apiece to fuel a 17-0 run that put the Jazz up 71-54 shortly before halftime.

“We needed that spurt before heading back into the locker room,” Markkanen said.

The Pacers cut the deficit to 81-71 on Bennedict Mathurin’s layup midway through the third quarter. Utah pulled away again, going up 101-79 on three straight baskets from Markkanen, Kessler and Talen Horton-Tucker.

“We just played into their hands,” Turner said. “I think they want you to try to take that first available shot as opposed to get your second or third action. I think we let them off the hook quite a bit.”

Utah and Indiana combined for 63 fouls and 70 free throw attempts. The Pacers were whistled for 35 personal fouls while the Jazz tallied 28. A tight whistle disrupted the flow of the game at times during the second half.

The Jazz focused on making subtle changes where needed while staying aggressive with their on-the-ball defense.

“It’s definitely tough, but at the end of the day we know what’s going to help you,” Sexton said. “You’ve got to adjust.”

Jazz: Kelly Olynyk fouled out in only 22 minutes, the fourth time he’s fouled out this season. … Utah scored a season-high 40 points in the second quarter.

INDIANAPOLIS (AP) — Darius Garland scored 24 points, Isaac Okoro added 20 and the Cleveland Cavaliers made 15 3-pointers Sunday in a 122-103 rout of the Indiana Pacers. All five starters scored in double figures for the Cavaliers, who shot 52.3% percent from the field, including 15 of 37 (40.5%) from long range, to complement […]
INDIANAPOLIS, IN・1 DAY AGO
FOX59

BLOOMINGTON, Ind. (AP) — Trayce Jackson-Davis scored 25 points and Jalen Hood-Schifino delivered the clinching basket on a dunk with 2 seconds left as No. 21 Indiana beat No. 1 Purdue 79-74 on Saturday. Zach Edey finished with 33 points and 18 rebounds for Purdue. The Hoosiers (16-7, 7-5 Big Ten) have won both of […]
WEST LAFAYETTE, IN・2 DAYS AGO
FOX59

INDIANAPOLIS (AP) — Buddy Hield scored 21 points against his former team and the Indiana Pacers beat the Sacramento Kings 107-104 on Friday night to stop a four-game losing streak. Hield shot 5 of 9 from 3-point range. Aaron Nesmith added 17 points for the Pacers, going 4 for 7 on 3s. Myles Turner had […]
INDIANAPOLIS, IN・3 DAYS AGO
The Comeback

Shocking and frankly terrifying news broke regarding Memphis Grizzlies superstar Ja Morant on Sunday afternoon. The story doesn’t quite paint the 2022 Most Improved Player or his associates in the most positive of lights either. The Athletic delivered a bombshell report that detailed the shocking incident. It occurred last month after a game between Morant’s Grizzlies Read more... The post NBA world reacts to absolutely shocking Ja Morant news appeared first on The Comeback: Today’s Top Sports Stories & Reactions.
MEMPHIS, TN・1 DAY AGO
FOX59

James closes in on scoring record, Lakers rally past Pacers

INDIANAPOLIS (AP) — LeBron James had 26 points, seven rebounds and seven assists and pulled within 63 points of becoming the NBA’s career scoring champ as the Los Angeles Lakers rallied to beat the Indiana Pacers 112-111 on Thursday night. James gave Los Angeles its first lead on a 3-pointer with 2:35 left in the […]
INDIANAPOLIS, IN・4 DAYS AGO
FOX59

INDIANAPOLIS — A devastated family is seeking justice after an Indianapolis woman was found shot to death inside her home on January 27. Brittany Allen, 33, was killed at her home in the Geist Landing neighborhood just off of 96th street after answering the door. Brittany’s daughter and mother were in the next room. “She […]
INDIANAPOLIS, IN・4 DAYS AGO
FOX59

SOUTH BEND, Ind. — A varsity basketball game between Washington and Riley high schools was canceled after a large brawl broke out in the crowd and spilled onto the court during halftime. According to the South Bend Police Department, the fight began shortly after 8 p.m. after both teams headed into the locker room for […]
SOUTH BEND, IN・4 DAYS AGO
FOX59

LAFAYETTE, Ind. — A Purdue University professor was arrested after being accused of dealing meth and propositioning women for sexual favors. According to the Lafayette Police Department, Sergey Macheret, 65, of Lafayette was arrested on Wednesday after a lengthy investigation into reports of a “suspicious male approaching women.” Macheret faces charges of making an unlawful […]
LAFAYETTE, IN・4 DAYS AGO
FOX59

MUNCIE, Ind. — Five children were taken from the care of a Muncie mother after police were called to a home with “deplorable conditions” and a lack of running water. Judy Dotson, 38, of Muncie faces five charges of neglect of dependent, each Level 6 felonies. According to court documents, Delaware County Sheriff’s Department deputies […]
MUNCIE, IN・3 DAYS AGO
FOX59

VINCENNES, Ind. (WTWO/WAWV) — Police say a Vincennes man ate a bag of methamphetamine while running away from a traffic stop. According to Indiana State Police, the traffic stop occurred at 1:50 a.m. Friday in an alley south of 14th Street. Police said as soon as the vehicle came to a stop the passenger door […]
VINCENNES, IN・3 DAYS AGO
FOX59

Haliburton is the first Pacer to be named an All-Star since Domantas Sabonis (2020-2021), who Indiana traded to Sacramento last season as part of the trade to acquire Haliburton.
INDIANAPOLIS, IN・4 DAYS AGO
FOX59

MEMPHIS, Tenn. (AP) — Memphis Grizzlies star Ja Morant tweeted Sunday that a friend of his has been banned from games at FedExForum for a year as a result of a confrontation between his supporters and members of the Indiana Pacers organization a week earlier. The NBA confirmed that unnamed individuals have been banned from […]
MEMPHIS, TN・14 HOURS AGO
FOX59

The Boilermakers earned 38 of 62 first-place votes in the poll released Monday to remain at No. 1 for a third straight week and seventh time this season.
WEST LAFAYETTE, IN・22 HOURS AGO
FOX59

INDIANAPOLIS – Out of all the high school basketball our FOX59 cameras caught tonight, two plays stand out as the best of the best. Now your vote will determine which of them wins the Friday Night Fast Break Play of the Game. NOMINEE #1: UNIVERSITY’S ANYA JORDAN & KEIRA BRIGHT University’s Anya Jordan gets the […]
AVON, IN・3 DAYS AGO
FOX59

INDIANAPOLIS — A man is dead following an overnight shooting that occurred inside of a food mart on Indy’s near west side. Indianapolis Metro police officers were called around 12:40 a.m. Saturday to the 3800 block of W. Michigan Street for a person shot. This is near a food mart at the intersection of Michigan […]
INDIANAPOLIS, IN・3 DAYS AGO
FOX59

One dead, police officer in ‘extremely critical condition’ after shooting at Memphis library

UPDATE: The Memphis officer has been upgraded from extremely critical to a stable condition. This story has been updated to reflect the identity of the deceased man. MEMPHIS, Tenn. (WREG) — One person is dead and a Memphis police officer was critically injured in a shooting Thursday afternoon at the Poplar-White Station library in East […]
MEMPHIS, TN・4 DAYS AGO
FOX59

INDIANAPOLIS — Four people, including two wanted men, are under arrest after state troopers were led on a chase through Indianapolis early Thursday morning. According to the Indiana State Police, the chase began at around 3:45 a.m. when a trooper saw a red Hyundai at 38th Street and Shore Drive drive straight from a turning […]
INDIANAPOLIS, IN・4 DAYS AGO
FOX59

INDIANAPOLIS – The NBA has investigated a postgame incident at the Pacers game in Memphis last week. Pacers players exchanged words with friends of Grizzlies star guard Ja Morant during the game. The confrontation then spilled over to a parking lot after the game. The Athletic reported someone in Morant’s party pointed a red laser […]
INDIANAPOLIS, IN・1 DAY AGO