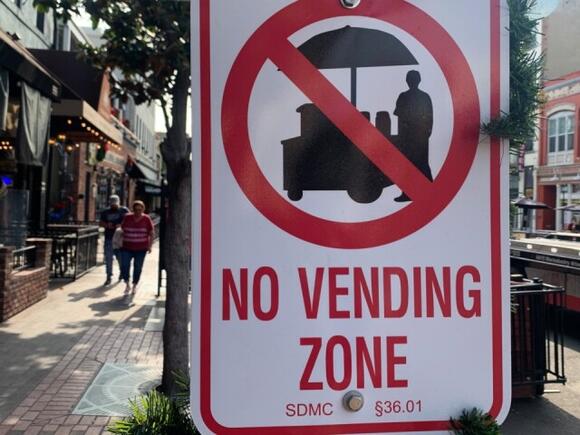 "I've been waiting for this day for quite a while," said Michael Trimble, Executive Director of the Gaslamp Quarter Association.

In May, the city banned sidewalk vendors from high-traffic areas like the Gaslamp Quarter.

However, Trimble said vendors ignore the rule because of the lack of enforcement.

"It's been unregulated chaos, madness," he said. "Friday, Saturday, Sunday, we could have 150 vendors doing business illegally in the Gaslamp Quarter."

Trimble said the vendors leave trash and block walkways, causing people to walk in the street.

Last month, one vendor stabbed another vendor after an argument near Petco Park.

Code Enforcement had been in charge of regulating the ordinance before the San Diego Police Department took over.

"It is dangerous. You're out there in the middle of the night. People are inebriated, so having a uniform presence hopefully helps and limits the violence," said SDPD Lt. Arturo Swadener.

Police have spent the last two weeks educating vendors operating in the Gaslamp District about the law.

The city also put up more than 400 "NO VENDING ZONE" signs.

"It's refreshing to know they are actually in line and are hoping to actually do something about it," said Breanna Lochmiller.

Lochmiller is the General Manager at Henry's Pub. She said her team usually spends the mornings cleaning up the trash vendors left behind on the weekends.

"It is a sticky situation. We want these people to thrive, but it seems like there are more cons than there are pros, at least in the Gaslamp District," Lochmiller said.

More than anything, Lochmiller hopes more enforcement makes the area safer for people, including employees.

"Safety is the biggest issue, so if you're going to bring fights and other issues, I don't want it. I want people to come here and have fun," she said.

Police said the penalty for a fourth violation could include impounding the vendor's cart.

Authorities reached out to the public Thursday for help identifying a woman who threatened a clerk with a pistol last month while robbing a Nestor-area convenience store.
SAN DIEGO COUNTY, CA・1 DAY AGO
ABC 10 News KGTV

A suspect was in custody after a man was stabbed in the neck near downtown San Diego, police said Thursday.
SAN DIEGO, CA・1 DAY AGO
ABC 10 News KGTV

Residents say they didn't receive any notice before a series of loud 'bangs' and military helicopters that landed near Liberty Station.
SAN DIEGO, CA・2 DAYS AGO
ABC 10 News KGTV

Driver loses control of SUV, crashes into side of Jack in the Box restaurant

An out-of-control SUV struck a sign and slammed into the side of a Jack in the Box restaurant in San Diego’s Southcrest neighborhood, but no injuries were reported.
SAN DIEGO, CA・1 DAY AGO
ABC 10 News KGTV

Lunar New Year celebrations are continuing to happen throughout San Diego this weekend and people who are looking for something to do can take advantage of half-prices at local museums this month.
SAN DIEGO, CA・2 DAYS AGO
ABC 10 News KGTV

A proposal to charge people to use public restrooms in the city of San Diego is receiving mixed reaction.
SAN DIEGO, CA・3 DAYS AGO
ABC 10 News KGTV

Over the past several years we've mainly seen them in Arizona and Texas, but it is the first time the San Diego sector has seen something like this.
SAN DIEGO, CA・1 DAY AGO
ABC 10 News KGTV

A man suspected of attempting to rob a bank in National City surrendered to the Escondido Police Department, the FBI in San Diego announced Tuesday.
NATIONAL CITY, CA・3 DAYS AGO
ABC 10 News KGTV

A notice appeared near a roadside memorial in Jamul for fallen troops demanding it is taken down, sparking anger and confusion.
JAMUL, CA・8 HOURS AGO
ABC 10 News KGTV

Before Tuesday, when you call 911, an ambulance and firefighters are automatically sent to you. But now, non-life-threatening calls will be triage nurses.
EL CAJON, CA・3 DAYS AGO
ABC 10 News KGTV

A second teenage boy was arrested Wednesday in a shooting that fatally wounded two young men early last month in a neighborhood near Palomar College.
SAN MARCOS, CA・2 DAYS AGO