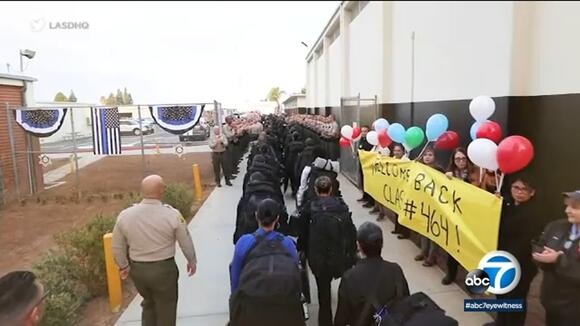 Earlier this week, members of the two Los Angeles County Sheriff's academy classes who were struck by a driver in Whittier resumed their training. Video from the department shows recruits being welcomed back to cheers by members of numerous agencies from across Southern California. Captain Pat MacDonald, who leads the LASD Training Bureau, said the reception was overwhelming and very moving. "Over the last week and a half, I've been getting emails and phone calls from numerous agencies. They wanted to set up a time where they can come and meet," he said. "They brought recruits from all over Southern California and they expressed their sincere sorrow and solidarity." The video showed the recruits walking to the facility as supporters held balloons and a sign that read, "Welcome back, Class #464!" "They've posted flowers and flags and posters outside of our gates here just showing that they're thinking about us and they're thinking about the recruits," said MacDonald. Three recruits remain hospitalized from the Nov. 16 crash. A driver struck the recruits while they were out on a training run. The driver who hit them claims he fell asleep at the wheel. Authorities have said they believe the crash was intentional.

My question is, why aren't they giving an update on the case. I mean, there's still 3 cadets seriously injured in the hospital. If they believe it was intentional, why is the guy out on the streets? Is this gonna be swept under the carpet and pretend it didn't happen.?

The acting consul of Chinese Consulate General in L.A. said the daughter of one of the victims is currently in China and is applying for a travel Visa to visit Monterey Park.
MONTEREY PARK, CA・47 MINUTES AGO
ABC7

One person was rushed to the hospital with injuries after an explosion occurred on the University of Southern California campus Thursday afternoon, authorities said.
LOS ANGELES, CA・1 HOUR AGO
ABC7

L.A. Sheriff Robert Luna said Monterey Park Police found a motorcycle just one block away from the crime scene that was registered to Huu Can Tran.
MONTEREY PARK, CA・12 HOURS AGO
ABC7

The man who disarmed the Monterey Park mass shooter less than half an hour after the massacre is set to receive a special honor for his actions.
ALHAMBRA, CA・6 HOURS AGO
ABC7

A driver was taken into custody after leading authorities on a high-speed chase from Long Beach through Orange County Thursday.
ORANGE COUNTY, CA・2 HOURS AGO
ABC7

Investigators said a 45-year-old man, who was not identified, was sent to the hospital with non-life threatening injuries and was taken into custody by police.
LOS ANGELES, CA・1 HOUR AGO
ABC7

A 31-year-old man with a history of alleged reckless driving has been arrested for a hit-and-run crash in South LA that killed two brothers, police said Thursday.
4 HOURS AGO
ABC7

The Monterey Park mass shooting has only sharpened residents' feelings about what makes the tight-knit community so special, and worth protecting.
MONTEREY PARK, CA・7 HOURS AGO
ABC7

A man armed with a gun was shot and killed by a Los Angeles County sheriff's deputy while a search warrant was being served at a home in Maywood, authorities said.
MAYWOOD, CA・10 HOURS AGO
ABC7

Monterey Park Chief Scott Wiese defended his decision not to warn the public for hours that a killer was on the loose, saying he didn't have enough information to effectively alert residents.
MONTEREY PARK, CA・1 DAY AGO
ABC7

The nonprofit Hollywood Partnership opened it's new community dispatch center, part of an experiment that could have implications for the entire city of Los Angeles
LOS ANGELES, CA・8 HOURS AGO
ABC7

The cast and crew of the Oscar-nominated film "Everything Everywhere All at Once" honored the victims of the Monterey Park massacre with a touching Lunar New Year celebration at one of the city's popular restaurants.
MONTEREY PARK, CA・1 DAY AGO
ABC7

The city of Pasadena is conducting the annual count of its homeless population, but it's not just about numbers. It's also providing people with medical services and other assistance.
PASADENA, CA・7 HOURS AGO
ABC7

Vice President Kamala Harris traveled to Monterey Park to meet with victims' families days after a mass shooter there killed 11 and wounded at least nine others inside a dance studio.
MONTEREY PARK, CA・21 HOURS AGO
ABC7

Police said the assault weapon that was used in the attack is uncommon and was one of several high-power guns in Huu Can Tran's possession that night.
ALHAMBRA, CA・2 DAYS AGO
ABC7

Long Beach police, with help from the FBI, arrested a man accused of pointing a "high-powered" laser at multiple aircraft for nearly one year.
LONG BEACH, CA・1 DAY AGO
ABC7

A 16-year-old boy was injured Tuesday night during a house fire in the Sunland-Tujunga area, authorities said.
LOS ANGELES, CA・1 DAY AGO
ABC7

A moment of silence was held on the floor of Congress on Wednesday to honor two Riverside County deputies killed in the line of duty.
RIVERSIDE COUNTY, CA・1 DAY AGO