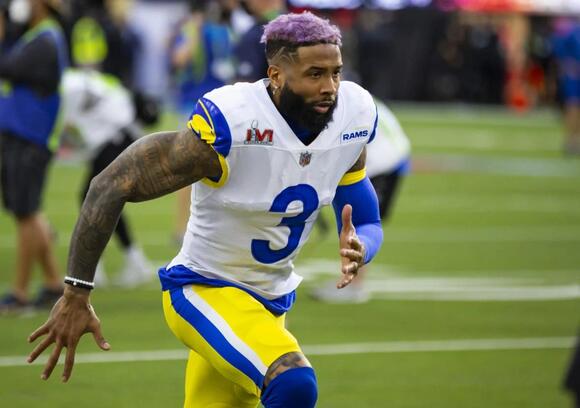 Odell Beckham Jr. is finally healed up from a torn ACL injury he suffered during last year’s Super Bowl and is looking for a team to join. And it seems like he is down to three teams in his search, those being the Dallas Cowboys, the New York Giants, and the Buffalo Bills.

The former All-Pro wide receiver went to visit his former team the Giants yesterday, is in Buffalo Saturday, and will go to Dallas on Monday. That is if he ever leaves Buffalo. Let’s take a look at why Odell Beckham Jr. should choose to wear Buffalo blue and red for the remainder of the 2022 season.

Odell Beckham Jr. and New York is still not a good mix

Sure, The Giants under former Bills offensive coordinator Brian Daboll have turned around their recent misfortunes and started off the season 7-4. But out of the three options, Daniel Jones is clearly the worst quarterback he could play with. Not to mention he also was traded from the Giants just three years ago.

The media in NYC is an absolute monster. The fans may be worse. They have by far the least odds of winning the Super Bowl among the interested parties. It seems as if this trip may have been planned to get the other two teams to up their bid, as there is really little to no reason for Beckham Jr. to reunite with his former organization.

Buffalo Bills give Beckham Jr. his best chance to play in another Super Bowl

Beckham Jr was on his way to a Super Bowl MVP when he tore his ACL in last year’s game, which saw his Rams defeat the Cincinnati Bengals 23-20. The stud WR left the game in the 2nd quarter but he did rejoin his teammates in street clothes for the 2nd half of the game and eventual celebration.

As he wept while leaving the field with his injury, you could tell that win or loss, he felt like he was missing an opportunity of a lifetime. You would have to think that it is just human nature to want to be on the field, contributing through the whole game, to feel worthy of the title “champion”. Healthy and with his eyes on the prize, he should be looking to Buffalo Bills to give him his best opportunity at that dream.

While the offense has struggled at times, Bills quarterback Josh Allen seems to be just about fully recovered from an elbow injury , and the team just strung together three wins on the “road” in just 12 days. They stand as the current Super Bowl favorites in Vegas, and landing Beckham would only cement them as such.

There is little doubt that out of the interested teams, Allen is the best AB of the group. If there wasn’t some young curly-headed QB in Kansas City, he may be considered the best in the whole league.

Not only is Allen the best of the bunch, but the offense needs Beckham and his skill set. Gabe Davis and Isaiah McKenzie have not stepped up to fill the roles of now-retired Cole Beasley and Emmanuel Sanders. Dawson Knox is not being utilized at all in new offensive coordinator Ken Dorsey’s offense. Khalil Shakir has not been able to grow into the offense quite yet in his rookie season and newly acquired Nyheim Hines has just two receptions since joining the team a month ago.

With Buffalo, he steps into a secondary target role, outside of Stefon Diggs and will see a lot of, if not all, single coverage. If he were to choose to go to the Cowboys, he would be trusting Mike McCarthy to be able to game plan a steady dose of targets as the 4th or 5th option behind guys like Ceedee Lamb, Ezekiel Elliot, Tony Pollard, Dalton Schultz, and Michael Gallup.

I know the stardom of “America’s Team” or the big apple may appeal to some. But like his buddy, Von Miller said, “I just feel like I’m at home, This is a place that I’m falling in love with. It just gets better and better each and every day.” Not only do the Bills give Beckham Jr. the best chance at another Super Bowl, but they are also charged by a community that will fully embrace the flamboyant superstar.

ABSOLUTELY 💯 OBJ NEEDS TO SIGN WITH BUFFALO. Why would he go back to play with the giants? Doesn't make any sense. As far as the cowboys go I just don't see a fit there. The HC isn't very good and Jerry Jones well need I say more. Buffalo has a great licker room environment, great leadership and a team that will go and win the next SB. 👍

The Buffalo Bills are coming off a disappointing end to their season, losing 27-10 at home against the Cincinnati Bengals in the AFC Divisional round in the playoffs. Entering the offseason, the Buffalo Bills have started looking toward the future and made the tough decision to fire one of their long-tenured coaches.
1 DAY AGO
Whiskey Riff

It looks like Dak isn’t doing too bad after his playoff loss to the San Francisco 49ers NFC divisional round this past Sunday…. Dallas Cowboys quarterback Dak Prescott has a new lady in his life, Louisiana State University swimmer named Jadyn Jannasch (her Instagram profile picture features her wearing a Cowboys jacket as well):
LOUISIANA STATE・1 DAY AGO
Sportsnaut

The Carolina Panthers became the first NFL team this cycle to hire a head coach, naming Frank Reich as the
CHARLOTTE, NC・1 DAY AGO
Sportsnaut

Cincinnati Bengals quarterback Joe Burrow has won all three of his matchups with the Kansas City Chiefs over the past
CINCINNATI, OH・2 DAYS AGO
Sportsnaut

Following another earlier-than-hoped exit from the NFL playoffs, the Dallas Cowboys are left wondering what they need to do to
DALLAS, TX・2 DAYS AGO
Sportsnaut

Patrick Mahomes participated in the morning walkthrough and will do the same in afternoon practice with the Chiefs on Wednesday,
KANSAS CITY, MO・2 DAYS AGO
Sportsnaut

Sportsnaut’s 2023 NFL power rankings before Super Bowl LVII take a look across the National Football League. While there are
TENNESSEE STATE・12 HOURS AGO
Sportsnaut

After recent speculation suggested he might be the front-runner for the job, on Thursday the Carolina Panthers reportedly decided to
CHARLOTTE, NC・1 DAY AGO
Sportsnaut

One of the best coaching candidates in this hiring cycle is quickly emerging as a good bet to fill one
HOUSTON, TX・16 HOURS AGO
Sportsnaut

As we approach Sunday’s AFC Championship Game between the Cincinnati Bengals and Kansas City Chiefs, we thought it would be
CINCINNATI, OH・18 HOURS AGO
Sportsnaut

We will soon find out what the Super Bowl LVII matchup in Arizona on Feb. 12 is going to be.
ARIZONA STATE・2 DAYS AGO
Sportsnaut

The New York Jets are expected to be a player in a potential Aaron Rodgers trade market, however, a unique
GREEN BAY, WI・1 DAY AGO
Sportsnaut

In an attempt to maintain the magic they had in 2022-2023, the New York Giants reportedly could pay one of
NEW YORK CITY, NY・18 HOURS AGO
Sportsnaut

With NFL Championship Sunday getting going here soon, a lot of the focus is on injuries some of the game’s
1 DAY AGO
Sportsnaut

Tom Brady open to Tampa Bay Buccaneers return: How it might look

If there had been any lingering doubt about star quarterback Patrick Mahomes’ injury status, it was put to rest Friday
KANSAS CITY, MO・12 HOURS AGO
Sportsnaut

Buffalo Bills linebacker Matt Milano has been named to the AFC roster for the upcoming Pro Bowl Games, the team
19 HOURS AGO
Sportsnaut