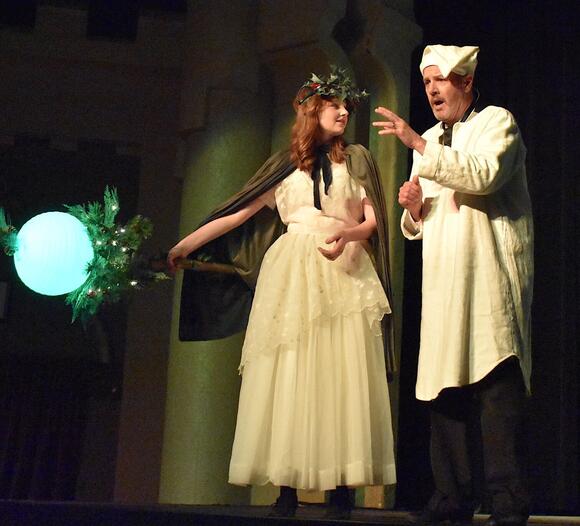 After nearly 30 years of staging live theater in Faribault, The Merlin Players are ending their run.

Their final show is the same one that brought live theater back to what is now the Paradise Center for the Arts.

With audiences on the decline and founding Artistic Director Julianna Skluzacek deciding to step back, the Board of Directors for the theater troupe decided it was time to take a final bow.

While some theater-goers have not returned since the pandemic forced stages to go dark, Skluzacek said there was a lingering concern.

“Young people don’t go to the theater anymore,” she said. “And so our audiences have been getting smaller over the last six or seven years.”

It’s not isolated to the Faribault community.

“A lot of theaters are suffering from this,” Skluzacek said.

Faribault won’t be without live theater after next weekend, though, and Skluzacek isn’t retiring. Paradise Community Theater is continuing to stage productions at the Paradise Center.

Skluzacek, of Owatonna, meanwhile, will continue directing shows for the Little Theatre of Owatonna.

“I’m just not going to be doing three or four shows a year anymore (between the two organizations). I’ll just be doing one, maybe two,” she said.

She won’t miss the taxing schedule, but Skluzacek said she’ll miss the members of The Merlin Players dearly.

“The best thing about doing theater is the people,” Skluzacek said. “I have friends of all ages, which makes my heart just overflow.”

While the Merlin group is breaking up, Skluzacek and director Sam Temple said they will have avenues to share their talent.

“It’s hard, but all of the people who are part of Merlin Players will still be doing theater,” Temple said.

Skluzacek started her community theater career with the Little Theatre and directed her first show there over 30 years ago.

According to The Daily News archives, The Merlin Players started as a small group conducting workshops at Skluzacek’s house. The name Merlin was inspired in part by the Merlyn th Magician character in production of “Camelot” that Skuzacek had directed, and in part for the small but powerful merlin falcon.

In 1995 representatives of Shattuck-St. Mary’s invited them to produce a show at their campus. They put on “Driving Miss Daisy,” and the school became the home for the troupe’s first several shows. They also performed a few times at Faribault High School and the Little Theater of Owatonna before finding a home in 2007 at the newly renovated Paradise Theater, now the Paradise Center for the Arts.

At the Paradise, they have put on 53 shows and over 300 performances for about 43,000 people, according to Steve Searl, president of The Merlin Players board of Directors.

For their final production they chose the same show they first performed at the Paradise. The 2007 production of “A Christmas Carol” brought live theater back to the Paradise after over 70 years.

The players decided it would be fitting to end their run with another staging of the classic.

The present cast, led by Searl as Ebenezer Scrooge, includes multiple members of the original cast.

Some members of the cast and crew have grown up with the Merlin family, including Temple. He was 10 years old when he acted in his first Merlin production.

“The relationships that came created my personality and my worldview. I’m not exaggerating when I say that. It just has such an impact,” Temple said. “I got this sense of belonging at the Paradise and Merlin Players — not just from the friendships, but from the way I can express myself.”

“Our goal was to get back to Dickens as much as possible, but then imagining in new ways how we can manifest these very abstract ideas from the literature into a new kind of magic,” Temple said.