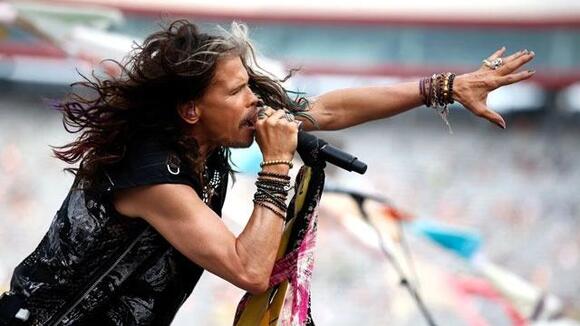 LAS VEGAS (KLAS) — Rock band Aerosmith announced the cancellation of its show on Friday evening due to an illness.

According to the band’s Twitter page, lead singer Steven Tyler is “unwell and unable to perform,” and was forced to cancel the show Friday evening as a result.

The show was set to begin at 8 p.m. on Friday. The band announced the cancellation on Twitter just over an hour prior to the start time.

The band’s limited residency Deuces Are Wild on the Las Vegas Strip has three more performance dates listed for the month of December at the Dolby Live Theater at Park MGM.

Tyler is expected to make a full recovery for Monday night’s show, the announcement on Twitter read.

In June, the band canceled its residency dates through July citing that Tyler had voluntarily entered a treatment program after relapsing following foot surgery.

Las Vegas(KLAS)-“Magic Mike’s Last Dance” will be out February 10th and the men of Magic Mike Live will be doing something very special to celebrate. JC Fernandez is joined by dancers Pat Packing and Sebastian Gonzalez to teach him some moves.
LAS VEGAS, NV・1 DAY AGO
8 News Now

A Night Of Rock, Blues And Electronic Music

Las Vegas(KLAS)-When you look at the DNA of Cairo Knife Fight you will find Grammy Awards, Emmy Awards and pure talent. JC Fernandez chats with members George Pajon Jr and Nick Gaffaney to talk about their upcoming show at the Sand Dollar Downtown.
LAS VEGAS, NV・1 DAY AGO
8 News Now

LAS VEGAS (KLAS) — A piece of Las Vegas’ entertainment history is coming back to life. The Neon Museum is set to relight the iconic Lido de Paris sign Thursday evening. The sign will be lit next to the iconic Stardust Hotel sign, where the Lido de Paris was located. The Lido de Paris show […]
LAS VEGAS, NV・2 DAYS AGO
8 News Now

From Beverly Hills To Las Vegas

Las Vegas(KLAS)-She brings her Southern Charm to Beverly Hills, says “Bless Your Heart” but in the most fashionable way. Sutton Stracke of The Real Housewives of Beverly Hills joins Jillian Lopez in studio to talk about her “Sutton” boutique and Real Housewives.
LAS VEGAS, NV・2 DAYS AGO
8 News Now

Las Vegas(KLAS)-Caroline Rhea is a comedic genius, from stand up to “Sabrina The Teenage Witch,” she has done it all in Hollywood. This weekend she will be performing at Jimmy Kimmel’s Comedy Club. She stops in studio to chat with JC Fernandez ahead of these shows.
LAS VEGAS, NV・1 DAY AGO
8 News Now

‘The Elvises are ready,’ Las Vegas chapels prepare for wedding increase ahead of Valentine’s Day

Love is always in the air throughout the world's wedding capital, and the month of February historically proves that. As the Las Vegas Valley grows, so does its multi-billion-dollar wedding industry.
LAS VEGAS, NV・2 DAYS AGO
8 News Now

LAS VEGAS (KLAS) — If you’re heading to the northeast valley, you’ll soon notice a gaming and entertainment destination catering to the Latino community. This new destination has been a vision of Fifth Street Gaming’s CEO, Seth Schorr, for 15 years and is finally a reality. “It’s an incredibly underserved if not ignored part of […]
LAS VEGAS, NV・1 DAY AGO
8 News Now

Cirque du Soleil is celebrating its 30th anniversary in Las Vegas and the many milestones it has reached since arriving. In celebration, it is holding a "once-in-a-lifetime" sweepstakes.
LAS VEGAS, NV・3 DAYS AGO
8 News Now

Las Vegas(KLAS)-Before Valentine’s Day comes around, you can enjoy the return of “You Don’t Own Me” party at Encore Beach Club. Roqui Theus chats with David Hadden, the Director of Lifestyle Marketing at Wynn Nightlife to tell us all about it.“You Don’t Own Me” is happening on February 8. For more information visit wynnsocial.com
LAS VEGAS, NV・2 DAYS AGO
8 News Now

Have a “ONO-LICIOUS” Good Game

Las Vegas(KLAS)-Island Sushi & Grill has the catering game plan ready for the Big Game Sunday! Roqui Theus stopped by their restaurant to break down the play
LAS VEGAS, NV・1 DAY AGO
8 News Now

Cuts, Cocktails And The Big Game

Las Vegas(KLAS)-The big game is less than two weeks away and it’s time to solidify those plans and why not do that at one of the coolest speakeasys in town. Tony Arnone, from The Barbershop inside the Cosmopolitan of Las Vegas, joins Mercedes Martinez to give us a little preview of what you can get.
LAS VEGAS, NV・3 DAYS AGO
8 News Now

Donating plasma is a great way to make money and help save a life at the same time. Here is everything you need to know about donating.
LAS VEGAS, NV・1 DAY AGO
8 News Now

One day after his arrest, sources told the 8 News Now Investigators that Nathan Chasing Horse lived at another home in North Las Vegas for six years. A man living in that neighborhood shared more about the things he saw during that time.
NORTH LAS VEGAS, NV・2 DAYS AGO
8 News Now

A trooper clocked a driver for going nearly 30 miles over the speed limit. The ticket that would later end in a fine and no points on the driver's license. Less than a year later, that same driver caused a crash that left nine people dead, including himself.
LAS VEGAS, NV・1 DAY AGO
8 News Now

Delays on southbound 215 near Tropicana due to crash

LAS VEGAS (KLAS) — There are traffic delays on southbound 215 near Tropicana Avenue due to a crash involving a truck. The utility truck, with a cherry-picker bucket lift, is on its side and blocking the far right lanes.
LAS VEGAS, NV・2 DAYS AGO
8 News Now

The National Coalition of 100 Black Women makes history every day. It advocates for Black women at home and on the steps of the White House. Nevada's chapter was started by Sandra Mack who worked until her recent death to promote equity.
LAS VEGAS, NV・1 DAY AGO
8 News Now

With Valentine's Day just around the corner, you have the opportunity to wish someone a happy or crappy Valentine's day all while helping out a local animal shelter
LAS VEGAS, NV・1 DAY AGO