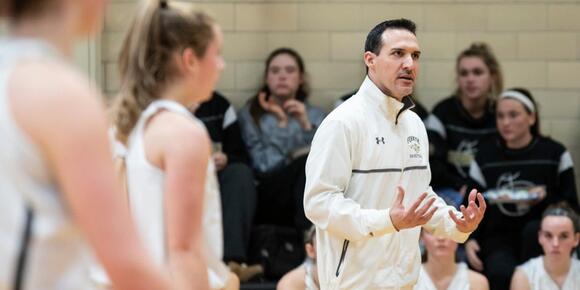 Twenty-one games, nine players, and one season of basketball underway.

When asked what Bishop Fenwick fans can expect from the girls basketball team this season, head coach Adam DeBaggis responded honestly, saying it’s boring when teams take 10 seconds to set up a play.

“I want to see uptempo basketball, nothing slow,” DeBaggis said. “We definitely just want to play tough defense, and play a fast-paced offense.”

DeBaggis believes the most important things for his team to do are communicate well and expect mistakes, as the Crusaders embark on a season in which 13 of their games are on the road.

“We don’t expect you to be perfect,” DeBaggis said.

Despite the fast-paced playstyle opposing teams can expect from Fenwick, DeBaggis stresses its effectiveness only works if it’s in control.

What does a team do when four of its seniors from last season went on to play college basketball? It relies on the next girl up.

Of the nine players suiting up for Fenwick, three are freshmen and just two are seniors.

After the Crusaders’ Friday evening scrimmage against Wakefield – a fairly even contest that served its purpose of helping players progress early on in the season – DeBaggis said his new players fit right in.

“They [freshmen] didn’t play nervous or anything; they played pretty well,” DeBaggis said. “If someone walked into the gym, they wouldn’t think they were freshmen,” DeBaggis said.

As for players who have ‘been there, done that,’ junior Cecilia Kay is a true scorer, rebounder, and leader according to her head coach. He also added she’s “on everyone’s radar.”

He also pinpointed the importance of seniors Erica Lendall, and Ava Bellacini who he describes as a “tremendous leader.”

With such a young team taking the hardwood, DeBaggis wants his players to understand it’s just a game. Jitters may surface, especially from some younger players, but he said the courts and lines are the same as they’ve always been.

When asked which games on the schedule come with a pinch more of excitement, DeBaggis was quick to name a few teams.

Bishop Feehan comes to town on Dec. 13 in the Crusaders’ first home game of the season, a team DeBaggis describes as “always tough.”

The other team he mentioned was St. Mary’s. Fenwick and the Spartans will battle twice this season – once in January and again in February.

In a schedule DeBaggis believes matches up with anyone in the state, he said all 21 games are tough, but exciting.

“It’s gonna be a battle every night, which is good,” DeBaggis said.

Joey Barrett can be reached at joseph@itemlive.com

The Prep wrestling team defeated Catholic Memorial 72-6 on Wednesday, checking a few things off in the process. The Eagles have now won 25 consecutive Catholic Conference titles and 114 The post St. John’s Prep wrestling is tough to beat appeared first on Itemlive.
11 HOURS AGO
Itemlive.com

Witches are no problem for Peabody

It was an easy win for the Peabody girls basketball team as the Tanners scared away the Salem Witches 55-14 on the road. Peabody (11-2) was led by Sophia Coburn The post Witches are no problem for Peabody appeared first on Itemlive.
PEABODY, MA・1 DAY AGO
Itemlive.com