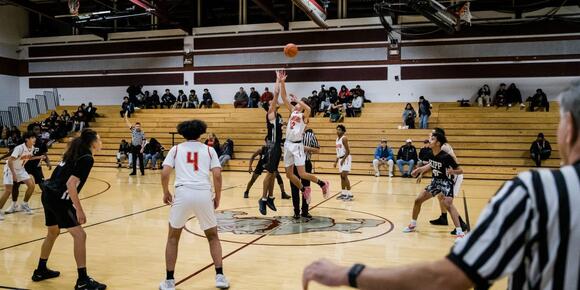 There were six games, with the first starting at 4 p.m. and the last tipping off at 7:50 p.m. The games consisted of Chelsea vs. Revere; KIPP vs. Somerville; Everett vs. Wakefield; Lynn Tech vs. Malden; Lynn Classical vs. Melrose; and Lynn English vs. East Boston.

A jamboree consisting of local teams allows for the community to get together and watch their players do what they do best. When asked about the event, Lynn Tech coach Corey Bingham says “the kids need it, and the city needs it.”

Coach Abreu, before his game, admitted this was something he envisioned when he got the job last year.

“My main goal is to bring that basketball fever back to the Lynn community,” Abreu said. “Having four Lynn schools playing made the place have good energy and a good atmosphere.”

Even though Lynn English, the host of the jamboree, was the last to tip off, the fans stayed throughout the event. Lynn English decided to give the fans a dunk show during layup lines as they waited for the game to get underway.

That excitement of the night continued through game-breaks – courtesy of the DJ playing music between games and timeouts.

The festivities were also an opportunity for players to take what they learn in practice, and implement it into a game scenario. Lynn Classical coach Marvin Avery says he was “looking to get guys some game time so they can get used to the feel and pace of the game.”

Other coaches, like Coach Bingham, were focused on honing in on a specific aspect of their teams’ strategy and focus.

“Our team is not too big, so we need to box out and play fast to try and disrupt our opponents to make up for [our] lack of size,” Bingham said.

Bingham wanted his team to focus on their transition defense and full-court press, something they’ve been working on in summer league and fall league.

Even though the teams may have different goals and aspirations for the season, each coach mentioned how these types of games help build the foundation.

Abreu says, “our goal is to win a state championship,” but believes games like these are part of the process to get to the endgame. “You will not win it [state championship] on day one, but you want to strive towards the goal each day.”

Coach Bingham had a similar response about this season’s goals, explaining, “we are just trying to take it one step at a time and lay the foundation.”

The winners of the day were Chelsea, Somerville, Wakefield, Lynn Tech, Melrose, and English. Though these games will not officially count as a win or loss in the columns, the experience the players and coaches got from these games proved valuable.