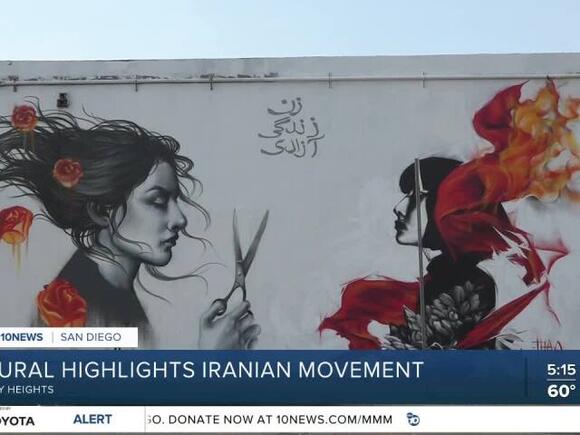 ABC 10News spoke with Thao French, one of the local female artists working to illuminate brave female faces in Iran.

“When people walk by I want them to almost be curious… and be like 'Who is this? Why is she so important?'” said French.

French painted the right half of the mural and another local female artist, Chloe Becky, painted the left half.

While Becky’s part shows an Iranian woman cutting her hair as an act of defiance, French’s part of the mural illustrates the face and spirit of 16-year-old Nika Shahkarami.

“I chose Nika because I remember seeing this video of her singing and being playful… and it just made me think of myself when I was a teenager because I was a little punk kid,” said French.

Shahkarami was arrested and killed after publicly protesting the regime and burning her hijab. Her death sparked outrage on social media, and she's become another face of the women-led movement in Iran.

“The flowers are to offer a proper funeral that she never had. The flames are for when she lit her hijab on fire and also a way to show that she’s rising from the ashes,” said French.

The mural already means a lot to Iranians here in San Diego.

“My cousin actually was shot at a protest in Iran last month,” one local Iranian woman told 10news.

She also shared that after her cousin was killed, her family was threatened by the regime.

“They said that we had to pretend he died of COVID instead, and we couldn’t say he was killed by security forces. So I think it shows that it’s not just my cousin or Nika Shahkarami… There are so many families that are grieving what’s going on,” she said.

French says she hopes the mural helps amplify the voices of Iranians fighting for freedom worldwide.

“I’m incredibly heartbroken for the world. An attack on humanity anywhere is an attack on everyone,” she said.

Families with loved ones who have died while in custody gathered outside the Sheriff's Department Headquarters in Kearny Mesa on Wednesday asking for reform and answers.
SAN DIEGO COUNTY, CA・1 DAY AGO
ABC 10 News KGTV

Transgender woman shares her side of story amid locker room controversy

A transgender woman at the center of controversy over an incident at a YMCA stood before the Santee City Council and community members to tell her side of the story.
SANTEE, CA・13 HOURS AGO
ABC 10 News KGTV

Among the mental and emotional coping tools for kids: Karate

With the increase in violence the U.S. has seen over the last few years, parents and students are feeling more anxious than ever.
SAN DIEGO, CA・1 DAY AGO
ABC 10 News KGTV

The series of recent shootings in California has communities on high alert. So much so, that La Mesa Police responded to what ended up being a false alarm at Lemon Avenue Elementary School Tuesday.
LA MESA, CA・1 DAY AGO
ABC 10 News KGTV

There is something special is happening at the Navy's island just 79 miles off the shore of San Diego.
SAN DIEGO, CA・2 DAYS AGO
ABC 10 News KGTV

Two men in their 70s were rushed to hospital in critical condition after being violently stabbed by a man downtown Monday morning.
SAN DIEGO, CA・3 DAYS AGO
ABC 10 News KGTV

The city's emergency declaration has been in effect since March 17, 2020, under then-Mayor Kevin Faulconer's administration.
SAN DIEGO, CA・3 DAYS AGO
ABC 10 News KGTV

San Diego County is working to get a more accurate number of how many people are living on the streets and what resources they need to secure housing.
SAN DIEGO COUNTY, CA・6 HOURS AGO
ABC 10 News KGTV

News Literacy Project: Behind the scenes at ABC 10News

As part of our partnership with the News Literacy Project, ABC 10News Anchor Jared Aarons gives you a behind-the-scenes look at the editorial process of how a news story goes from idea to on-air.
SAN DIEGO, CA・2 DAYS AGO
ABC 10 News KGTV

The San Diego Sheriff's Department says overdose is the leading cause of accidental death in the county. The department has "Harm Reduction Kits" available at all stations and substations.
SAN DIEGO, CA・2 HOURS AGO
ABC 10 News KGTV

The multi-room, multi-sensory exhibit “Beyond King Tut” will open at the Wyland Center on Jan. 27 at the Del Mar Fairgrounds.
SAN DIEGO, CA・3 DAYS AGO
ABC 10 News KGTV

A man who pleaded guilty to killing another man who was shot and dragged by a car in Mount Hope was sentenced Monday to nearly two dozen years in state prison.
SAN DIEGO, CA・3 DAYS AGO
ABC 10 News KGTV

You’d never think that a carton of eggs would cause a problem at our border crossing, but CBP is asking travelers not to cross eggs into the United States.
SAN DIEGO, CA・6 DAYS AGO
ABC 10 News KGTV

Amid climbing electric bills and demand for solar, a video captured a man grabbing solar panels from the side of a Rolando home.
SAN DIEGO, CA・4 HOURS AGO
ABC 10 News KGTV

Authorities have identified two San Diego Police officers who fatally shot a motorist who allegedly pulled a gun and got into a shootout with them last week following a brief pursuit in Barrio Logan.
SAN DIEGO, CA・22 HOURS AGO