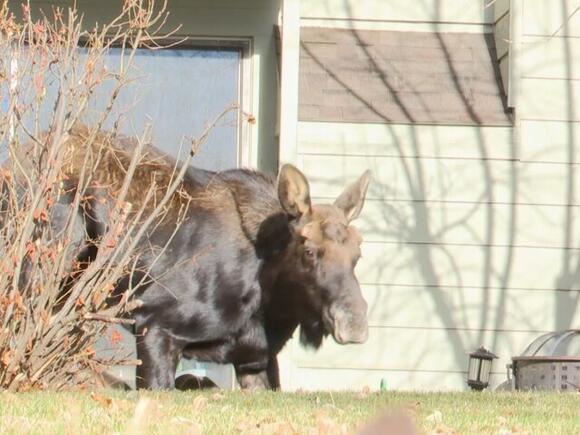 Montana Fish, Wildlife and Parks officials defended their decision to euthanize a moose that was running free in Billings for the past two months .

Robbie Seykora, acting public information officer for the Billings-based region 5 of the agency, said Friday that FWP had hoped to avoid killing the animal, but biologists were worried about the spread of disease from the moose, which was visibly struggling to walk.

“When we start getting into, ‘Why didn’t the zoo take it?’ or, ‘Why didn’t we do this?’, with new laws that passed with (Chronic Wasting Disease) and the spread of disease, it’s very hard to transfer a cervid, a cervid being a member of the deer animal. Deer, moose, elk, things like that. So it becomes very difficult legally to do that,” Seykora said. “With the spread of disease, it has made it tough to make that happen, is the real answer. It just wasn’t a possibility."

Chronic Wasting Disease is an infectious disease most commonly found in deer but can spread among moose.

Related: Timeline: The life and death of the moose in Billings

Seykora added in a written statement that the state didn't bring the moose to any wildlife rehabilitation center out of concerns that it could spread disease to other animals and threaten wildlife populations.

"Bringing orphaned or injured (deer, moose or elk) into a rehabilitation center with the intent for later release could introduce a disease into populations where it was not present. In addition, these animals tend to habituate quickly and can cause problems after release," Seykora wrote.

Seykora also blamed residents feeding the moose as a possible reason for its poor health.

"There are certain human foods that can cause digestive problems in animals with a wild animal like a moose,” Seykora explains.

In a press release published on FWP's website, the reasons stated for euthanizing the animal were due to the moose being too sick and injured to walk.

“We just wanted to give it the best opportunity. Based off our veterinarians and wildlife experts, a relocation of this moose would not have gone well for the moose. It’s kind of in the forefront now and we know it happened," Seykora explains. "It probably would have been the same ending, just out of the view of the public."

But some Billings residents disagree with FWP's decision.

Trevor O'Banion is an avid hunter and believes FWP dropped the ball with this moose.

“I think it was a bad decision. I feel like they could have handled it long before they did,” O'Banion said on Friday. “I’m a hunter first and foremost, but any hunter, true hunter, will tell you that the first thing we care about, is the dispatching of game in an ethical, clean way. And if we don’t dispatch the game, we want them to live wound-free, go on and be just fine. This is where that should have went. This shouldn’t have ever got to where it ended."

O'Banion, a Billings resident, explains he has spent 30 days hunting this year and wishes FWP would reach out to people like him in situations like this.

“I feel like a lot of FWP’s decisions come from people that are sitting behind a desk most of the time. They’re not asking people like me," O'Banion explains. "I spend a lot of time outside with the animals. They never talk to people like me to get their input, to get how they feel about the situation."

O'Banion believes action could have been taken sooner to avoid euthanizing the animal.

"I saw some reporting of people saying a moose was too big to tranquilize and move, which is very false because they tranquilize beef, cows, all the time. Ranchers, to doctor them if the situation calls for it obviously, and I feel like this situation did call for that,” O'Banion explains. “I get they wanted it to leave on its own, which that would have been fantastic. But he obviously got comfortable, right? And I feel like, maybe if he did get injured, if they wouldn’t have waited so long, that moose would have been just fine."

O'Banion is joined by hundreds of Billings and greater Montana residents who have criticized the decision to euthanize on social media posts .

Seykora says the moose has been taken to the Wildlife Health Lab in Bozeman for a full necropsy, which is an animal autopsy. Results should be ready within three to four weeks.

“Obviously not a decision that we like either. I think it came to a conclusion nobody wanted. We wanted to give the moose every opportunity to leave town on its own," Seykora explains.

But O'Banion believes FWP could have done more to protect the animal.

MR O'Bannion you are so right! thank God someone finally had the intelligence and guts to stand up and tell it like it is. AS we a people how could we change this? Who are these people that sit behind their desks and have the power to make these decisions?

FWP created CWD in their Colorado lab in 67, when they injected scrapie into live mule deer..... LOOK IT UP

“There’s the thought that we want to do the marathon loop, you know connect the Rims to the river and get all that going so there’s plans in the works for all of that,”
BILLINGS, MT・11 HOURS AGO
Q2 News

Among the semifinalists is The Backporch BBQ restaurant in Roundup, which has landed a spot in the Best New Restaurant category.
ROUNDUP, MT・1 DAY AGO
Q2 News

Gene John Klamert, 70, pleaded guilty to mail fraud. He faces a maximum of 20 years in prison, a $250,000 fine and three years of supervised release.
BILLINGS, MT・2 DAYS AGO
Q2 News

A docuseries focused on the missing and murdered indigenous people problem here in Montana is set to premier on Showtime February 3rd
BIG HORN COUNTY, MT・4 DAYS AGO
Q2 News

No injuries in school bus slide-off in Lockwood

Ice and snow caused slick conditions and a school bus slid off the road in Lockwood. It happened on Emerald Hills Drive near Indian Ridge Road a little before 4:00 Friday afternoon.
LOCKWOOD, MT・1 DAY AGO
Q2 News

A winter storm will bring several inches of snow to the lower elevations and over a foot in the mountains
BILLINGS, MT・2 DAYS AGO
Q2 News

The two new stores would expand the footprint of the area's largest to seven stores in Billings and eight total in Yellowstone County.
BILLINGS, MT・3 DAYS AGO
Q2 News

For decades, churches across Montana have sheltered people experiencing homelessness, giving them a place to spend the night out of the cold.
BILLINGS, MT・5 DAYS AGO
Q2 News

Avian Influenza is spreading rapidly across the country in both wild and domestic birds, including right here in Montana.
MONTANA STATE・9 DAYS AGO
Q2 News

A new study shows that the popular Yellowstone television series is bringing millions of visitors as well as millions of dollars to Montana.
MONTANA STATE・9 DAYS AGO
Q2 News

The report explains how Montana's growth in population, economic, and vehicle travel is creating high demands for our transportation system.
MONTANA STATE・10 DAYS AGO