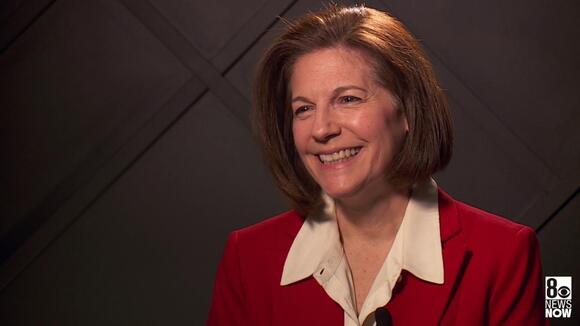 LAS VEGAS (KLAS) — Democratic Sen. Catherine Cortez Masto said Nevada was crucial to the presidential nominating process as the Democratic Party moved Nevada up a spot in the primary order and as the recently re-elected Las Vegas native looked toward the next Senate session.

The Democratic National Committee moved Friday to make South Carolina the first primary state in February 2024. Nevada and New Hampshire would follow three days later on the first Tuesday of the month.

In 2021, the Nevada Legislature voted to switch to primaries from caucuses and schedule the voting process for the first Tuesday in February. The mail-in ballot process would begin weeks earlier, per state law.

The DNC’s changes only affect the Democratic primary order. While the Republican nominating process will occur on the same day, Nevada’s order among the top four states for the GOP does not change.

“I think Nevada is crucial,” Cortez Masto said in an interview minutes before the DNC announced the changes. “Whether we are now first or second, I think it is important that we are there in these presidential races. What I know from my last election as Democrats just in general is we need to be talking to people and the working class. We need to be talking to these families and talking about what matters to them and focused and fighting for them. Nevada is the perfect state to get that.”

President Joe Biden has said he will seek re-election in 2024. At age 80, he would be the oldest presidential nominee. It is rare for members from the sitting president’s party to challenge him or her in a primary.

“If President Biden runs for re-election I will support him,” Cortez Masto said, highlighting Biden’s work passing the bi-partisan infrastructure package, the American Rescue Plan, the Inflation Reduction Act and the CHIPS and Science Act.

“These are all things that I was able to get around in the state and talked about how we have benefited and helped working families here in Nevada,” she said.

“Should he run?” Charns asked.

“That’s his decision to make.”

“We need to do more to address the mental health needs in Nevada and across this county and bring more resources to fill in the gaps,” she said. “Not just on the crisis mode of it when that first call is made, but short term and long term, and that’s going to be my focus.”

Cortez Masto has worked to protect undocumented immigrants brought to the country as children, known colloquially as Dreamers.

“What did Adam Laxalt say to you when he called and conceded?” Charns asked.

“I think it’s personal, but he did make the call,” she said. “And he released a statement. And that’s more than I received in the last election when I ran for Senate.”

As the Nevada Legislature got under way in Carson City on Monday, leaders in the Senate took a moment to make note of history being made.
CARSON CITY, NV・2 DAYS AGO
8 News Now

Carson City got a lot busier on Monday. A new Legislative session started with a busy agenda and divided branches of government.
NEVADA STATE・2 DAYS AGO
8 News Now

The Nevada Legislature opened Monday with a prayer, a rendition of the state anthem and swearings-in ahead of four months of negotiations, hearings and votes that will define the state’s budget and operations for the next two years.
NEVADA STATE・2 DAYS AGO
8 News Now

Watch Biden’s State of the Union address and GOP response

"In his State of the Union today, the President will announce a new set of policies to continue to make progress advancing his Unity Agenda."
ARIZONA STATE・1 DAY AGO
8 News Now

‘We’re going to have to compromise,’ Governor Lombardo settles into first term in office as legislative session begins

President Joe Biden's second State of the Union address since taking office saw the commander-in-chief rallying ordinary Americans and his fellow politicians alike to work together to get the country back on its feet (via The Guardian). Following years of turmoil, thanks to the COVID-19 pandemic and widespread economic disparity, which led to a more divided citizenry than ever before, Biden took an optimistic approach to moving forward.
19 HOURS AGO
The Independent

Former House Speaker Nancy Pelosi told CNN that President Joe Biden would face no Democratic primary challenger in 2024, after his State of the Union address. Ms Pelosi, who stepped aside as leader of House Democrats but whom the caucus elevated to the honorary title of Speaker Emerita, spoke to CNN after the president delivered his joint address to Congress.The address comes as Mr Biden weighs whether to run for a second term in 2024. But Ms Pelosi told CNN she did not think that Mr Biden would face any Democratic challenger.“Yes, the age issue is something we all...
12 HOURS AGO
8 News Now

Scott Turner still has a Las Vegas area code. As a former backup quarterback at UNLV, he knows the area. So it seems like a natural fit that the longtime NFL assistant join the Raiders as passing game coordinator.
LAS VEGAS, NV・4 DAYS AGO
8 News Now

Las Vegas police are searching for a suspect involved in a robbery in the Spring Valley area.
LAS VEGAS, NV・4 DAYS AGO
8 News Now

A wild horse from Mount Charleston was killed by federal officials this week. The horse was loved within the community and residents are demanding to know why the Bureau of Land Management did not take less aggressive means.
MOUNT CHARLESTON, NV・3 HOURS AGO
8 News Now

‘I was framed:’ Las Vegas politician accused of killing journalist speaks from jail

The former elected official accused of killing a journalist claimed Monday that he was framed. Robert Telles, 46, requested a new interview with 8 News Now to give his side of the story.
LAS VEGAS, NV・2 DAYS AGO
8 News Now

Biden to focus on fentanyl, social media ad targeting in State of the Union

President Biden plans to use his State of the Union address on Tuesday to build on his “unity agenda” by calling on Congress to help him crack down on the influx of fentanyl coming into the U.S. and help tackle the mental health crisis by banning targeted advertising online for children. The four pillars of […]
1 DAY AGO
8 News Now

Vetoed tenant discrimination bill back up for consideration at Legislature

Sixty-two percent of Americans say President Biden has not achieved much during his first two years in office, a new Washington Post-ABC News poll shows, despite efforts by Democratic leaders to frame that time as the most productive in Washington since Lyndon Baines Johnson’s “Great Society” agenda.   Only 36 percent of Americans surveyed said […]
2 DAYS AGO
8 News Now

Aaron Rodgers talks Raiders on CBS: ‘A lot of Davante misses you comments’

LAS VEGAS (KLAS) — A Kingman man is accused of abusing his girlfriend’s 4-month-old child, police said. Anthony Bone, 24, was arrested on a felony child abuse charge after the child’s mother contacted the Mohave County Sheriff’s Office last week. The mother told police that she saw her baby had “severe bruising” on her butt […]
KINGMAN, AZ・7 HOURS AGO