GamesRadar+ delivers daily news, previews and reviews of all the best games, movies and TV, and helps its audience decide how to spend their money and their time. 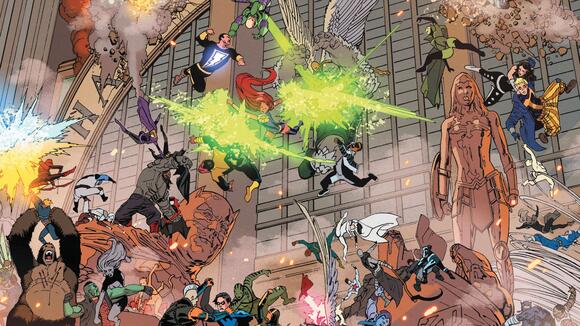 The battle for the soul of the DCU is upon us. The Great Darkness and its Dark Army lay siege to Earth-Prime, and DC's heroes across multiverses will have to fight to save all of reality from its totalitarian reign.

Dark Crisis: War Zone is an oversized anthology one-shot showcasing some of the individual battles in the war for DC's reservoir of realities. The comic is made up of five action-packed tales created by a host of DC talent and featuring some fan favorites. For example, the first story sees Linda Park and Iris West up against the footsoldiers of the Dark Army.

Scroll down to check out the preview pages below, which also includes two variant covers, the first by Mario Fox Foccillo and Prasad Rao, and the second by Dan Jurgens.

The first story, titled ‘On Time,’ is written by Flash scribe Jeremy Adams, drawn by Fernando Pasarin, inked by Matt Ryan, colored by Matt Herms, and lettered by Troy Peteri. It sees Iris West reporting the clash of heroes and villains in front of the Hall of Justice. Things start to go south, then Iris is saved by a speedster she recognizes as her sister-in-law, Linda Park.

Iris was unaware of Linda's powers (follow the current Flash run to find out more), so her rescue is surprising in more ways than one. Realizing that there are more people around to save than errant reporters, Iris uses a code she learned from Barry to get into the Hall of Justice's advanced armory. “Let's. Go. Shopping,” she tells Linda.

The four other stories in Dark Crisis: War Zone are, in order of appearance:

The comic is on sale December 6.

Want more scenes from the battles raging during the Dark Crisis? Click here to read about Damian Wayne's reality-hopping heroes who may hold the key to breaking the chains of the Great Darkness for good.

Are Spider-Man and the X-Men any different after the Dark Web crossover?

Didn't read Spider-Man/X-Men: Dark Web? Here's everything you missed with its final issue now on sale
4 HOURS AGO
GamesRadar

In Brightest Day...
1 DAY AGO
GamesRadar

The specials tie up "long-simmering plotlines, reintroduce major players, and put all the pieces in place"
2 DAYS AGO
GamesRadar

Exclusive: Bill Skarsgård breaks down his new John Wick villain – and the threat he poses in Chapter 4
NEW YORK STATE・2 DAYS AGO
GamesRadar

New ads have debuted in Australia and the U.K.
2 DAYS AGO
GamesRadar

Keanu Reeves promises John Wick: Chapter 4 will have most action yet – including a huge 'car-fu' sequence

DC's Chapter One is "more planned out" than MCU’s beginnings, says James Gunn

James Gunn comments on DC's past: "They were just giving away IP"

Keanu Reeves and the John Wick: Chapter 4 team on spin-offs – and the potential of Chapter 5

Exclusive: Keanu Reeves says we’ll have to "wait and see" about a potential John Wick: Chapter 5
2 DAYS AGO
GamesRadar

Michael B. Jordan and Jonathan Majors square up in exclusive new image from Creed III

"Gameplay, narrative, atmoshere, music - it's all singing from the same hymn sheet"
8 HOURS AGO
GamesRadar

The Batman and Joker sequels won't be part of the DCU

The Last of Us stars explain why they're not worried about episode 3 backlash: "This is made with love and reverence"

Jonathan Majors breaks down his "hyper-intelligent" Ant-Man and the Wasp: Quantumania villain Kang

GamesRadar+ delivers daily news, previews and reviews of all the best games, movies and TV, and helps its audience decide how to spend their money and their time.