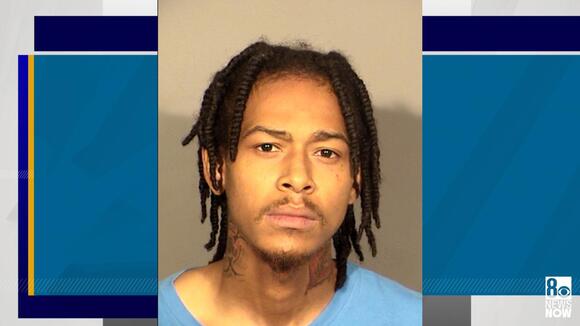 Lewis is described in documents as Kennard’s girlfriend’s sister.

Lewis was taken to the hospital following the Monday afternoon shooting, but died from her injuries Tuesday evening, documents said.

Las Vegas Metro police arrested Kennard on Monday on what were then gun-related charges, records showed. The charges were upgraded to murder following Lewis’ death on Tuesday, documents said.

Kennard reportedly told investigators he shot Lewis “on accident.” Witnesses told police Lewis and another woman were fighting outside near Kennard’s car before the shooting.

While speaking with officers, Kennard said he and his girlfriend had an argument that morning about marijuana.

AGAIN, SO SAD THAT 2 PPL LOST THEIR YOUNG LIVES THAT DAY. She in painful death & he at 26 rots in a cell for life ( was No accident if fired on her more than 1x )but still alive.

multiple gun shots oh it was an accident

LAS VEGAS (KLAS) — One person was shot and injured in North Las Vegas on Monday afternoon, police said. It happened at approximately 2:41 p.m. in the 1000 block of W Washburn Rd., near Washburn and Camino Al Norte. When officers arrived they found a man believed to be in his 30s who was suffering […]
NORTH LAS VEGAS, NV・1 DAY AGO
8 News Now

A North Las Vegas man who wanted to pawn a pair of gold earrings left the store without the jewelry, his driver's license … and minus the tip of his pinky finger.
NORTH LAS VEGAS, NV・15 HOURS AGO
8 News Now

LAS VEGAS (KLAS) — Police investigated a homicide at an apartment complex after a man was found shot and later died in the Las Vegas Lakes area on Monday afternoon. The incident took place at the 8600 block of Starboard near Durango south of Sahara. Metro police officers with the Summerlin area command responded to […]
LAS VEGAS, NV・1 DAY AGO
8 News Now

LAS VEGAS (KLAS) — Police in California arrested a suspect over the weekend in connection with the death of a Las Vegas woman last week. Ronald Martin Hetzel Jr., 31, was arrested on Saturday and booked into a Victorville County detention center on a murder charge, according to Las Vegas police. He was arrested for […]
LAS VEGAS, NV・1 DAY AGO
8 News Now

‘I was framed:’ Las Vegas politician accused of killing journalist speaks from jail

The former elected official accused of killing a journalist claimed Monday that he was framed. Robert Telles, 46, requested a new interview with 8 News Now to give his side of the story.
LAS VEGAS, NV・1 DAY AGO
8 News Now

LAS VEGAS (KLAS) — A man is accused of shooting and killing his girlfriend during a fight, according to Las Vegas police. David Kashich, 62, was arrested Thursday on charges of murder, assault with a deadly weapon, and owning or possessing a gun as a prohibited person. Police were called to the scene around 9:06 […]
LAS VEGAS, NV・4 DAYS AGO
8 News Now

LAS VEGAS (KLAS) — The head coach for a nationally acclaimed figure skating team in the Las Vegas valley reached out to 8 News Now after someone stole the team’s trailer. Players and coaches for the Las Vegas Ice Theatre are devastated by the theft. It happened on Monday afternoon as the team was practicing. […]
LAS VEGAS, NV・10 HOURS AGO
8 News Now

Las Vegas police are searching for a suspect involved in a robbery in the Spring Valley area.
LAS VEGAS, NV・3 DAYS AGO
8 News Now

A local mother has made it her mission to turn her family's tragedy into an opportunity to give back to the community.
LAS VEGAS, NV・1 DAY AGO
8 News Now

A trooper clocked a driver for going nearly 30 miles over the speed limit. The ticket that would later end in a fine and no points on the driver's license. Less than a year later, that same driver caused a crash that left nine people dead, including himself.
LAS VEGAS, NV・4 DAYS AGO
8 News Now

One couple said they're lucky to be alive after their car was hit by another driver traveling nearly 100 miles per hour, while he was under the influence in North Las Vegas, police said.
NORTH LAS VEGAS, NV・4 DAYS AGO
8 News Now

A mother and daughter are accused of stealing tens of thousands of dollars from a stroke victim in their care, police wrote in court documents the 8 News Now Investigators obtained.
LAS VEGAS, NV・4 DAYS AGO
8 News Now

A Las Vegas man was sentenced to four years and nine months in prison after committing a series of robberies while on supervised release, the United States Department of Justice announced Friday.
LAS VEGAS, NV・4 DAYS AGO
8 News Now

Because so many couples come to Las Vegas to tie the know in February, the county has opened a temporary pop-up marriage licensing bureau at Harry Reid International Airport in the Terminal 1 baggage area near Carousel 5.
LAS VEGAS, NV・19 HOURS AGO
8 News Now

LAS VEGAS (KLAS) — A student at a local north valley middle school was arrested after the discovery of a gun on campus, according to the Clark County School District. The incident occurred at Brian and Teri Cram Middle School on Friday according to a letter to parents from the school’s principal Gary Bugash. The […]
LAS VEGAS, NV・4 DAYS AGO