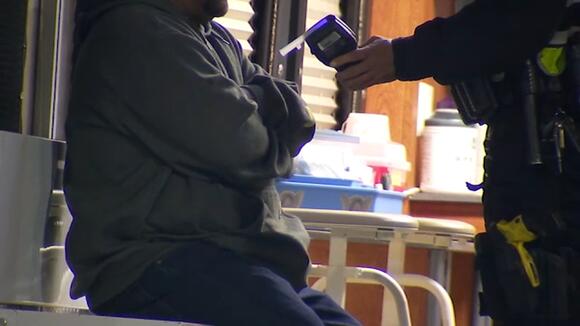 Local law enforcement is hammering home the dangers of drunk driving as they see a spike in DUI arrests. The California Highway Patrol, Fresno Police Department, Clovis Police Department, Fresno County Sheriff's office and the District Attorney's office are partnering with Mothers Against Drunk Driving, to stress the importance of designating a driver. For a fourth Christmas, the family of Fresno Police officer Phia Vang will have an empty chair at their table where he would normally be. His oldest son, Corey Vang, says, "there are somedays that are rough, especially during the holidays, it's a lot harder than usual." Vang adds, "we visit his resting place and tell him Merry Christmas ... tears are bound to come regardless, but we're still grateful for the time we did have with him when he was still with us." The 26 year veteran of the department was on his way home from work when he was killed by a drunk driver. Now, Corey is volunteering with mothers against drunk driving, to stress the life changing consequences of drunk driving. CHP officer Mike Salas says, "it's one of those situations that not only brings anger, it brings frustration. It brings sorrow especially when it's one of our fellow officers out there that is involved just because it's an inexcusable act." Thanksgiving weekend alone, CHP arrested 1,016 DUI drivers across the state. Salas says, " that cell phone is right at your hand make that call either to a ride share program taxi tow truck." Cell phones and ride share apps are nothing new but the DUI problem remains. So far in 2022, Fresno County has seen 4,413 DUI cases come in for prosecution-- including 147 crashes that caused injury-- 18 people died. Fresno Police Chief Paco Balderrama says, "there's no excuse anymore... a 2,500 pound vehicle driven by someone intoxicated can and will kill somebody." This year, his department has made 1,604 DUI arrests on pace to surpass last year's total. Clovis police have made 315 DUI arrests so far this year, compared to 275 all of last year.

Tulare County Sheriff Mike Boudreaux is calling for the death penalty for those responsible for the murders of six people in Goshen.
TULARE COUNTY, CA・3 HOURS AGO
ABC30 Central Valley

A California Highway Patrol officer is home and recovering after getting pinned between two vehicles.
FRESNO, CA・22 HOURS AGO
ABC30 Central Valley

A Merced family is feeling fortunate they were not hurt after a car came crashing into their home.
MERCED, CA・7 HOURS AGO
ABC30 Central Valley

The stabbing happened just before 9 p.m. Friday in front of a convenience store on Fresno Street near Belmont Avenue.
FRESNO, CA・2 DAYS AGO
ABC30 Central Valley

Visalia Police searching for person responsible for deadly shooting in 2020

Visalia Police need your help to track down the person responsible for a deadly shooting in 2020.
VISALIA, CA・3 DAYS AGO
ABC30 Central Valley

Crash knocks power out for residents in Fresno's Tower District

A single car crash into a power pole is to blame for a power outage affecting some Tower District residents.
FRESNO, CA・1 DAY AGO
ABC30 Central Valley

The fire broke out just before midnight at the Fagbule Glass House on Shields between Blackstone and Highway 41.
FRESNO, CA・12 HOURS AGO
ABC30 Central Valley

A suspicious package found near the Selland Arena in downtown Fresno was found to be harmless on Thursday night.
FRESNO, CA・2 DAYS AGO
ABC30 Central Valley

Crews have been working around the clock to fix potholes in the roads across Fresno.
FRESNO, CA・3 DAYS AGO
ABC30 Central Valley

A Fresno woman celebrated her 95th birthday on Tuesday with a surprise from her favorite California Highway Patrol Officer and ABC30.
FRESNO, CA・5 DAYS AGO
ABC30 Central Valley

One person has died and two more are injured following a car crash at the intersection of Ben Maddox Street and Douglas Avenue in Visalia.
VISALIA, CA・2 DAYS AGO
ABC30 Central Valley

A man has died after being hit by a car near Madera late Wednesday night.
MADERA, CA・4 DAYS AGO
ABC30 Central Valley

A former central Fresno church is now rubble after an early morning fire. The flames were first spotted just before 1 Friday morning on Orchard and Mckenzie.
FRESNO, CA・3 DAYS AGO
ABC30 Central Valley

A 45-year-old Visalia man has been sentenced for killing a motorcyclist in a 2020 DUI crash.
VISALIA, CA・5 DAYS AGO