Timeline: The life and death of the moose in Billings 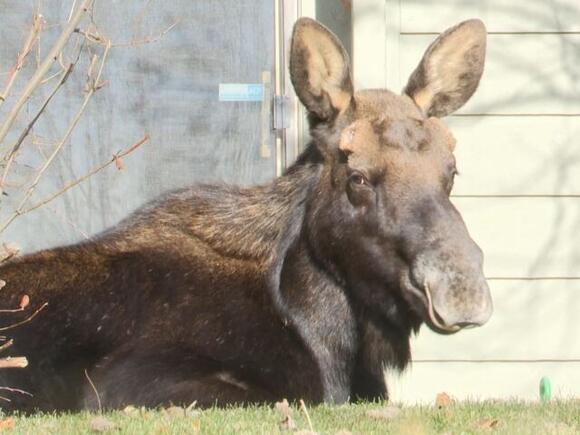 A young moose spent nearly two months hanging out in a Billings neighborhood before it was euthanized Thursday by state wildlife agents.

Here's a timeline of the moose's activities in town.

Laura Porter spots a young bull moose in a field near the Zoo Drive exit off Interstate 90. She tells Q2 she wasn't sure what the animal was at first glance.

"I came over that hill coming towards the Zoo Drive exit, and I saw this big black thing in the field. I thought this has got to be either a cow or a bear, but it was so big."

Related: Moose on the loose: Bull moose spotted in Billings

Moose on the loose in Billings

The moose moves into the area of 15th Street West and Avenue D where security video at the Alliance Resource Center shows the moose run past a man sitting on a bench. The moose can be seen passing within inches of the man, who was unaware of the large animal until it nearly ran into him.

Moose charges past man in Billings

The moose settles into a north-central Billings neighborhood, concerning some residents.

“We’d really like him to be transported to an area where he’s safe, and everyone else will be safe after he ages,” one resident said.

It's trick-or-treat time for the moose.

The moose remains in the same general residential area over Halloween, causing some concern for young children who might encounter the large animal while out trick or treating.

"With kids and people in the neighborhood, that moose could get upset about anything and then end up hurting somebody," one resident said.

Some residents also say the moose appears to have been injured.

The moose has been in town for a month, and wildlife officials say they are satisfied that he poses little threat and are hoping the animal will leave town on his own.

“He has access to food and water. Again, it's a wild animal. We are hoping that that injury heals and that he's able to leave town,” FWP spokeswoman Chrissy Webb said.

Related: After a month, wildlife officials stand by plan to let Billings moose 'leave on its own'

A resident captures concerning video of the moose. The animal looks like it is struggling to walk.

“The poor thing, you know, you look out your window and there’s this moose crawling,” the resident said.

But at least one resident wondered if the animal will be capable of leaving town on its own, which had been FWP’s hope since day one.

“Pretty soon he’s going to end up dead back here.”

An update to the Billings moose on the loose

State wildlife officials announce they have euthanized the moose.

The moose was in poor health and struggled to walk, wildlife officials said.

So sad it came to this, now FWP looks like they don't follow their own advice to let nature take its course. Had they been smarter they would have hazed the moose out of town for that to happen.

She's no Superhero or even a non-profit, but on many Sundays you'll find "Wander Woman" around downtown Billings handing out much-needed food and supplies.
BILLINGS, MT・10 HOURS AGO
Q2 News

Construction along Broadway Avenue in Red Lodge is in full swing, as the community attempts to repair the washed-out road before springtime.
RED LODGE, MT・5 HOURS AGO
Q2 News

Tony Seitz started crafting unique beehive boxes after taking up beekeeping with his son. He has been retired since 2009 and enjoys creating the colorful boxes as a hobby.
BILLINGS, MT・5 DAYS AGO
Q2 News

The Montana Women’s Run began in 1982 with 200 registrants and celebrated last year with over 4,600 women participating virtually around the world.
BILLINGS, MT・4 DAYS AGO
Q2 News

Next thing she knew, the skulls she had painted for her wedding in September 2022 had caught peoples attention.
BILLINGS, MT・1 DAY AGO
Q2 News

In Billings, police issued 268 red light citations in 2022 and 169 warnings, and they say there are far more people breaking the red-light law.
BILLINGS, MT・6 DAYS AGO
Q2 News

Man shot in apparent self-defense in Billings charged with robbery

The Veazey family suffered the loss of their daughter on New Year's Day. The mother, Morgan Veazey, is now wanting to give back to the hospital that helped them through the difficult time.
BILLINGS, MT・6 DAYS AGO
Q2 News

Very windy conditions will continue in the Upper Yellowstone Valley and along the Rocky Mountain Front through Saturday. Mild temperatures will prevail through the period.
BILLINGS, MT・3 DAYS AGO
Q2 News

Q2 Billings Area Weather: Windy for now, showers, then quiet for the weekend

Wind is our biggest concern for now, followed by showers Wednesday. But mild temperatures continue all week with a relatively quiet weekend.
BILLINGS, MT・5 HOURS AGO
Q2 News

A milder than normal week will see some areas reach into the 50s at times. Strong crosswinds will impact the western foothills through Wednesday.
BILLINGS, MT・17 HOURS AGO
Q2 News

“I had posted a couple of photos just to social media, just joking, like I thought I saw a UFO,” Doak said.
BILLINGS, MT・3 DAYS AGO
Q2 News

It is Groundhog day, and Punxsutawney Phil said six more weeks of winter weather. But for the next week, mild weather is the story in our area.
BILLINGS, MT・4 DAYS AGO
Q2 News

When you think of America's best BBQ, Roundup might not be the first town that comes to mind. But Roundup suddenly has a reputation for mouthwatering food.
ROUNDUP, MT・2 DAYS AGO