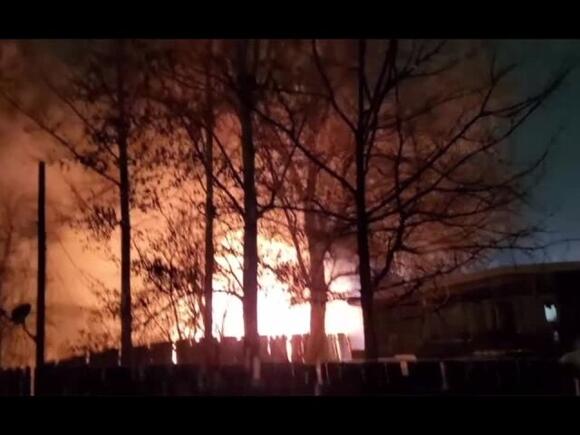 BILLINGS – Thirteen people were displaced in Billings after a house fire burned down their sober living home early Friday morning on the 2400 block of Green Terrace Drive.

The fire had taken off at Sober Beginnings by the time firefighters arrived after midnight to flames shooting out. The home was fully involved when they arrived, and city officials said the home next door received minor heat damage.

Neighbor Britton Collier said the sounds of the fire woke them up and they had to evacuate.

“It literally sounded like someone was trying to like, force themselves into the house. It was such a loud bang,” Collier said.

She said she, her roommate, and their dog Leonard watched the fire burn from across the street.

“It was definitely scary. We could see the sparks coming from the electricity and it obviously goes to the pole right in our backyard and that was…when we were leaving the lights were flickering. So it was one of those things like, is it going to take our house too? It was very scary,” she said.

Most of the house and garage is now nothing more than charred remains.

Some of the men who lived at the sober house were able to recover some undamaged belongings from the back of the house.

No one was injured, but recovery experts say this could be a setback for the residents.

Katy Petersen knows all about getting sober. She’s been through it herself, and now works with others in recovery.

“For somebody just coming out of jail, ya know, nice comfortable bed, brand new bedding, things nobody else has ever slept on before, can be a relief and comforting,” she said.

Petersen said residents could have lost personal items that can be difficult to obtain, like identification, and possessions they started to gather, like clothes.

“To lose it..oh my goodness. I couldn’t even imagine the feeling of that. People just getting on their feet and getting clothes and maybe a car,” Petersen said.

There is now a GoFundMe set up for cash donations. You can also drop men’s clothes, shoes, backpacks, and toiletries off at Groomingdales at the corner of 15th Street West and Central Avenue or at the SureStay Plus Hotel at 3040 King Ave. W.

“All of sudden it was this big explosion in the sky and all this debris started slowly coming down like it was big smoke," she said.
BILLINGS, MT・1 DAY AGO
Q2 News

Details of the harrowing crime were released Thursday in court records charging a 32-year-old man with not only shooting two people but then attempting to rape one of the victims.
BILLINGS, MT・2 DAYS AGO
Q2 News

A man accused of a Jan. 8 crime spree in Billings that left one man dead, another man seriously injured and numerous vehicles damaged or destroyed was arraigned Friday.
BILLINGS, MT・1 DAY AGO
Q2 News

After undergoing two surgeries in 367 days to remove brain tumors, a Laurel firefighter is now paying it forward by raising money for other brain cancer patients.
LAUREL, MT・5 DAYS AGO
Q2 News

Police tactics and use of force are under national scrutiny again, following the death of Tyre Nichols, 29, who was beaten by five police officers now charged with murder in Memphis, Tenn.
HARDIN, MT・4 DAYS AGO
Q2 News

Tony Seitz started crafting unique beehive boxes after taking up beekeeping with his son. He has been retired since 2009 and enjoys creating the colorful boxes as a hobby.
BILLINGS, MT・3 DAYS AGO
Q2 News

Very windy conditions will continue in the Upper Yellowstone Valley and along the Rocky Mountain Front through Saturday. Mild temperatures will prevail through the period.
BILLINGS, MT・1 DAY AGO
Q2 News

The Veazey family suffered the loss of their daughter on New Year's Day. The mother, Morgan Veazey, is now wanting to give back to the hospital that helped them through the difficult time.
BILLINGS, MT・4 DAYS AGO
Q2 News

Parents in west Billings and south of Billings are looking into the possibility of building a new high school.
BILLINGS, MT・3 DAYS AGO
Q2 News

The crash on North 27th Street happened shortly before 10 a.m. when a car crashed into the Billings Gazette building.
BILLINGS, MT・8 DAYS AGO
Q2 News

“The doctors have said she probably wouldn’t be here now had we not jumped in, and she came to us,” said Renee.
RED LODGE, MT・6 DAYS AGO
Q2 News

Yet another Billings hospital puts Montana on the map for stroke care, as Billings Clinic receives a prestigious designation for its stroke center.
BILLINGS, MT・3 DAYS AGO
Q2 News

Daytime and nighttime temperatures will be staying above the norm through late next week. Windy conditions remain to the west through tomorrow.
BILLINGS, MT・1 DAY AGO