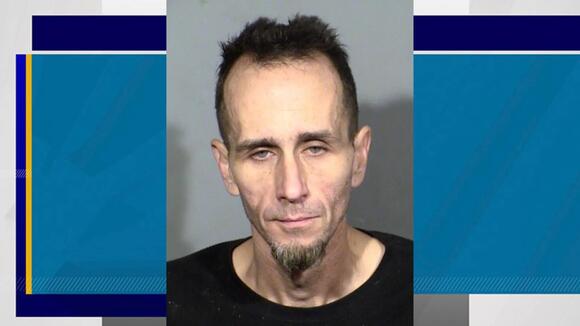 LAS VEGAS (KLAS) — The Clark County coroner’s office has identified the person found deceased earlier this week inside a barrel as a 39-year-old man.

Las Vegas Metro police arrested Ryan Bentley, 43, on Tuesday on one charge of open murder. Investigators suspect Bentley killed Enriquez at a home near Washington Avenue and Jones Boulevard in late October. The men knew each other, documents said.

Police suspect Bentley and another person dismembered Enriquez’s body and then bought a 55-gallon barrel to conceal the remains, documents said.

On Tuesday, Nov. 29, a person notified Clark County Public Works about an abandoned barrel near Quail Avenue and Palm Street. A public works contractor removed the barrel from the area and then opened it, finding the suspected human remains and bleach inside.

Inside the barrel, investigators said they found a torso missing its arms and head. The coroner’s office was working to identify Enriquez’s cause of death.

They're trying to determine cause of death! Might have something to do with missing arms, legs and head. Just a thought.

LAS VEGAS (KLAS) — A man is accused of shooting and killing his girlfriend during a fight, according to Las Vegas police. David Kashich, 62, was arrested Thursday on charges of murder, assault with a deadly weapon, and owning or possessing a gun as a prohibited person. Police were called to the scene around 9:06 […]
LAS VEGAS, NV・19 HOURS AGO
8 News Now

A trooper clocked a driver for going nearly 30 miles over the speed limit. The ticket that would later end in a fine and no points on the driver's license. Less than a year later, that same driver caused a crash that left nine people dead, including himself.
LAS VEGAS, NV・15 HOURS AGO
8 News Now

A mother and daughter are accused of stealing tens of thousands of dollars from a stroke victim in their care, police wrote in court documents the 8 News Now Investigators obtained.
LAS VEGAS, NV・18 HOURS AGO
8 News Now

The driver facing a DUI charge, who was rescued from a fiery crash on the Las Vegas Strip, appeared to be revving the car's engine, causing the tires to spin and the vehicle to catch fire, documents obtained Thursday said.
LAS VEGAS, NV・1 DAY AGO
8 News Now

One couple said they're lucky to be alive after their car was hit by another driver traveling nearly 100 miles per hour, while he was under the influence in North Las Vegas, police said.
NORTH LAS VEGAS, NV・11 HOURS AGO
8 News Now

Videos the 8 News Now Investigators obtained show a serial kidnapping suspect appearing in a Las Vegas courtroom before he was released for credit for time served. He later tortured a woman and killed two men.
LAS VEGAS, NV・1 DAY AGO
8 News Now

A Las Vegas man was sentenced to four years and nine months in prison after committing a series of robberies while on supervised release, the United States Department of Justice announced Friday.
LAS VEGAS, NV・16 HOURS AGO
8 News Now

LAS VEGAS (KLAS) — Police investigated a barricade incident after a robbery suspect was located in the central valley. It happened near Washington Avenue and Twin Lakes Drive near Lorenzi Park on Wednesday night. Metro police called in the SWAT team to investigate the incident. Evacuations in the area are taking place as a precaution, […]
LAS VEGAS, NV・2 DAYS AGO
8 News Now

LAS VEGAS (KLAS) — A student at a local north valley middle school was arrested after the discovery of a gun on campus, according to the Clark County School District. The incident occurred at Brian and Teri Cram Middle School on Friday according to a letter to parents from the school’s principal Gary Bugash. The […]
LAS VEGAS, NV・17 HOURS AGO
8 News Now

LAS VEGAS (KLAS) — Police were called to investigate a homicide in the downtown Las Vegas area on Tuesday night after a report that a woman had been shot. The incident occurred at 1000 block of South 3rd Street, near Charleston and Las Vegas boulevards. Police received a call from a man in his 20s […]
LAS VEGAS, NV・3 DAYS AGO
8 News Now

Metro officer Derek Stebbins had to act fast to get an unresponsive driver out of a car as it burst into flames on the Las Vegas Strip Friday.
LAS VEGAS, NV・3 DAYS AGO
8 News Now

A federal report on guns and crime shows that police recovered and traced more than 23,000 weapons over a five-year span in Las Vegas, with pistols accounting for three of every four weapons.
LAS VEGAS, NV・20 HOURS AGO