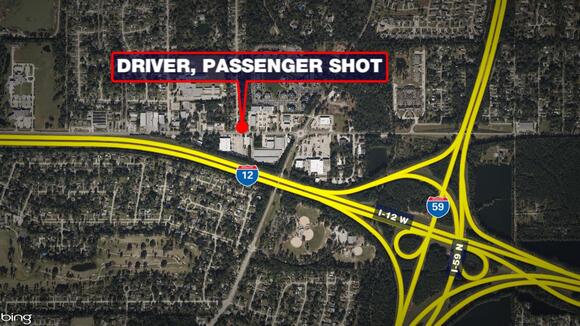 Disclaimer: All persons are presumed innocent until proven guilty.

SLIDELL, La. ( WGNO ) — Two teenagers were arrested by St. Tammany Parish detectives Friday morning in connection to a shooting earlier in the week that left a 19-year-old driver dead and a passenger wounded.

We’re told a second suspect, 18-year-old Deanthony Williams was also arrested at a home in New Orleans in connection to the homicide investigation. Williams was booked as a fugitive into the Orleans Justice Center and awaits extradition. Upon returning to St. Tammany Parish, he will also be charged with first-degree murder and attempted first-degree murder.

The shooting happened around midnight Tuesday morning when neighbors reported hearing shots fired in the 100 block of Northwood Drive. That’s where police saw a car, driven by 19-year-old Ralph Landes of Lacombe, crashed into a parked pickup.

Landes was discovered to have been shot multiple times, leading him to crash. He was pronounced dead at the scene.

An unidentified male passenger was also shot while inside the car. He was taken to an area hospital for a non-life-threatening wound to his leg.

Details on what led up to the shooting, including a possible motive, were unavailable. The shooting remains under investigation by the STPSO. Anyone with any information regarding the shooting is urged to contact the STPSO at 985-898-2338.

An alleged armed robbery suspect is wanted by the New Orleans Police Department for an incident in the Algiers area.
NEW ORLEANS, LA・3 HOURS AGO
WGNO

At about 1:50 a.m. on March 20, 2022, an accident happened near the corner of North Robertson and Lesseps Streets involving 25-year-old Judah Brophy.
NEW ORLEANS, LA・58 MINUTES AGO
WGNO

Shooting investigation leads to four arrested with 13 charges in total

A search warrant issued for the address led to the discovery of illegal drugs and evidence in the shooting.
SLIDELL, LA・1 DAY AGO
WGNO

According to the NOPD, just before 5:30 p.m., officers responded to the 6000 block of Chef Menteur Highway.
NEW ORLEANS, LA・1 DAY AGO
WGNO

Investigation revealed an argument between the two about London attempting to drive while intoxicated,
ROSELAND, LA・1 DAY AGO
WGNO

A Louisiana charter captain has been arrested after allegedly issuing worthless checks, and taking payment for trips and not following through, according to the Louisiana Department of Wildlife and Fisheries (LDWF).
LOUISIANA STATE・23 HOURS AGO
WGNO

A Hammond teen faces a murder charge after detectives say he shot a woman while inside her parked car at a Tangipahoa Parish gas station on Sunday.
HAMMOND, LA・2 DAYS AGO
WGNO

A 40-year-old case is officially closed after a sentence was handed down to the person a Tangipahoa Parish court determined to be responsible.
HAMMOND, LA・1 DAY AGO
WGNO

Man gunned down in Tremé

Judge strikes down request to try Linda Frickey’s accused carjackers as individuals, will be tried as adults

Four teenagers accused of the New Orleans carjacking last year that led to the dismemberment and death of 73-year-old Linda Frickey appeared in court again on Monday for a pre-trial hearing.
NEW ORLEANS, LA・2 DAYS AGO
WGNO

Michael LeBlanc, Sr., 74, of Baton Rouge was sentenced to 24 months in prison, a $50,000 fine and two years of supervised release under probation.
BATON ROUGE, LA・1 DAY AGO
WGNO

Ochsner leaders were joined by Jefferson Parish officials Tuesday to celebrate the opening of Ochsner Medical Complex – Clearview, located where the old Sears used to be.
METAIRIE, LA・20 HOURS AGO
WGNO

The U.S. Coast Guard is searching for a missing family near Biloxi Bay after officials say they did not return from a boating trip Monday evening.
BILOXI, MS・1 DAY AGO
WGNO

BATON ROUGE, La. (BRPROUD) – A Southern University student was killed in a crash on Monday evening. Reginald Elloie, 23, died in a crash on I-110 near Scenic Highway, according to the East Baton Rouge Coroner’s Office. EMS confirms the crash took place around 5:30 p.m. and Elloie was pronounced dead at the scene. Southern […]
NEW ORLEANS, LA・1 DAY AGO
WGNO

A Louisiana sheriff has been named as president of the National Sheriff's Association.
SAINT CHARLES PARISH, LA・1 DAY AGO
WGNO

An Erath elementary school teacher has been recognized for her efforts to keep Louisiana's unique musical heritage alive.
ERATH, LA・3 HOURS AGO