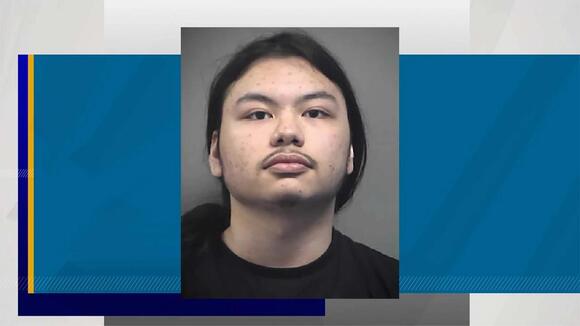 LAS VEGAS (KLAS) — A man who was driving almost double the speed limit before killing a 22-year-old woman this summer could face a sentence of just months in jail or a fine.

Brandon Iglesias, then 18, accepted a plea deal on Thursday to a reduced misdemeanor charge of vehicular manslaughter. North Las Vegas police initially charged Iglesias with reckless driving and reckless driving resulting in death, which is a felony.

Iglesias was driving 63 mph in a 35-mph zone near the intersection of Deer Springs Way and Gliding Eagle Street on July 4 before a crash that killed Brooklyn Fellure.

He was driving westbound into the intersection and had the right of way, according to an arrest report. However, Iglesias forfeited his right of way when evidence showed his “minimum speed after impact was almost double the posted speed limit,” the report said.

Iglesias slammed into another vehicle that was driving northbound across the intersection, causing it to slide away and rotate “more than two and a half times” before crashing into a light pole, the report said.

Fellure, who was the passenger in the vehicle that was hit, died at the hospital. The driver survived.

Nevada’s vehicular manslaughter law defines the crime as “through an act or omission that constitutes simple negligence.”

Iglesias’ plea deal means he will face a sentence of six months, a $1,000 fine or both. Sentencing is up to the judge’s discretion.

You know, we just think the evil forces control up the food chain elections, not so. Our judges’ elections are also controlled. Notice how lenient they’ve been the last few years? I don’t think judges should be shown as “Non Pars” on the ballots, because certainly they are not.

it's our DA and the bleeding heart judges that allow this, no one is held accountable for their actions

A trooper clocked a driver for going nearly 30 miles over the speed limit. The ticket that would later end in a fine and no points on the driver's license. Less than a year later, that same driver caused a crash that left nine people dead, including himself.
LAS VEGAS, NV・13 HOURS AGO
8 News Now

A Las Vegas man was sentenced to four years and nine months in prison after committing a series of robberies while on supervised release, the United States Department of Justice announced Friday.
LAS VEGAS, NV・14 HOURS AGO
8 News Now

One couple said they're lucky to be alive after their car was hit by another driver traveling nearly 100 miles per hour, while he was under the influence in North Las Vegas, police said.
NORTH LAS VEGAS, NV・8 HOURS AGO
8 News Now

LAS VEGAS (KLAS) — A man is accused of shooting and killing his girlfriend during a fight, according to Las Vegas police. David Kashich, 62, was arrested Thursday on charges of murder, assault with a deadly weapon, and owning or possessing a gun as a prohibited person. Police were called to the scene around 9:06 […]
LAS VEGAS, NV・17 HOURS AGO
8 News Now

The driver facing a DUI charge, who was rescued from a fiery crash on the Las Vegas Strip, appeared to be revving the car's engine, causing the tires to spin and the vehicle to catch fire, documents obtained Thursday said.
LAS VEGAS, NV・1 DAY AGO
8 News Now

A mother and daughter are accused of stealing tens of thousands of dollars from a stroke victim in their care, police wrote in court documents the 8 News Now Investigators obtained.
LAS VEGAS, NV・15 HOURS AGO
8 News Now

LAS VEGAS (KLAS) — An ex-Las Vegas Metropolitan police officer will spend one year behind bars for choking and beating his stepson in 2020, a judge ruled Tuesday. John Woodruff, 32, was sentenced on two counts of child abuse, neglect or endangerment. He received a suspended sentence of 28 to 72 months behind bars and […]
LAS VEGAS, NV・2 DAYS AGO
8 News Now

LAS VEGAS (KLAS) — The trial for ex-Public Administrator Robert Telles, who is accused of killing Las Vegas investigative reporter Jeff German last year, was pushed back several months, a judge ruled Wednesday. Telles, 46, was scheduled to go to trial on April 17 after pleading not guilty to a murder charge last October. The […]
LAS VEGAS, NV・2 DAYS AGO
8 News Now

Videos the 8 News Now Investigators obtained show a serial kidnapping suspect appearing in a Las Vegas courtroom before he was released for credit for time served. He later tortured a woman and killed two men.
LAS VEGAS, NV・1 DAY AGO
8 News Now

LAS VEGAS (KLAS) — Police investigated a barricade incident after a robbery suspect was located in the central valley. It happened near Washington Avenue and Twin Lakes Drive near Lorenzi Park on Wednesday night. Metro police called in the SWAT team to investigate the incident. Evacuations in the area are taking place as a precaution, […]
LAS VEGAS, NV・2 DAYS AGO
8 News Now

LAS VEGAS (KLAS) — A student at a local north valley middle school was arrested after the discovery of a gun on campus, according to the Clark County School District. The incident occurred at Brian and Teri Cram Middle School on Friday according to a letter to parents from the school’s principal Gary Bugash. The […]
LAS VEGAS, NV・14 HOURS AGO
8 News Now

LAS VEGAS (KLAS) — The Clark County School District Police are claiming there was an attempt to cover up what they call “failings” at a Las Vegas elementary school. According to a police report 8 News Now obtained, it began after a special education teacher was accused of child abuse. Yet, authorities determined an effort […]
LAS VEGAS, NV・1 DAY AGO
8 News Now

2 injured after roll-over crash in Henderson

Two people were injured, with one in critical condition, after a car rolled over in Henderson.
HENDERSON, NV・2 DAYS AGO