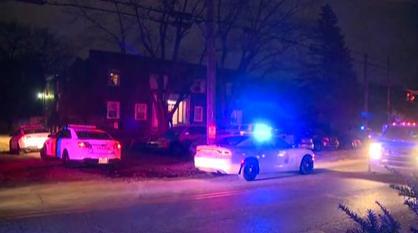 INDIANAPOLIS — One man is dead following a shooting inside an apartment building on Indy’s south side.

The victim has been identified as 21-year-old Elijah Mitchell.

Neighbors said they heard arguing coming from one of the apartments inside the building, followed by the shooting.

Just before 5:30 Friday morning, police were called to the Hanna Bluff apartments and found Mitchell shot inside. The 21-year-old died on scene.

Police believe everyone involved in the case has been accounted for, and one woman was taken into custody for questioning.

The deadly shooting continued what has been a violent week in the city. Starting Tuesday at an apartment complex on the northwest side, the Indianapolis Metropolitan Police Department has investigated four homicides over the last four days.

“There’s still work that needs to be done. One homicide is one too many. We will always say that trying to resolve anything with guns is never the answer,” said IMPD Officer Samone Burris.

“The bottom line is this is not just a police problem. This is a community problem,” said IMPD Assistant Chief Chris Bailey on Thursday.

While police said the exact relationship between the suspect and the victim in the shooting on Hanna is still being determined, Bailey said this week that preventing issues of domestic violence will be a top priority for the department in 2023.

“You’re going to see a greater emphasis from us next year on domestic violence offenders. Not just people that are shooting in domestic violence, but those who meet a criteria that has been proven they are either going to be a victim of homicide or they’re going to commit a homicide,” explained Bailey.

Following the overnight shooting, one small child was removed from the home. Victims Assistance will work with the Department of Child Services to ensure that child is safe. The child was not physically harmed in any way.

Anyone with information about this incident should call Detective Gary Toms at the IMPD Homicide Office at 317-327-3475 or email him at Gary.Toms@indy.gov Alternatively, they can call Crime Stoppers of Central Indiana at 317-262-8477 to remain anonymous.

Ok......make-it-make-sense.Didn't IMPD just spend millions of taxpayer's dollars on sophisticated "Gun-shot" technology?The spokesperson on the gun-shot technology, made it seem like IMPD would be there in seconds, to "Investigate" & prevent additional gun crime in the vicinity. But......in this story, IMPD keeps the same narrative of guns being used in the Community.....which makes "Gun-shot" technology, a waste of time & money.

Approximately one hour later police engaged in a short pursuit involving a vehicle that matched the description. Upon noticing the police, the man then proceeded to throw two firearms from the car onto the road.
INDIANAPOLIS, IN・7 HOURS AGO
FOX59

1 person shot, killed on near northwest side after reported break-in

INDIANAPOLIS — One person was killed early Thursday in a shooting after a homeowner reported a break-in on the near northwest side of Indianapolis. Police were sent to the 1300 block of W. 26th Street (near N. Harding Street) just after 4:05 a.m. in reference to a person shot. IMPD confirmed a man with gunshot […]
INDIANAPOLIS, IN・1 DAY AGO
FOX59

INDIANAPOLIS — A 21-year-old man is under arrest after a rash of shootings on Indy’s near west side that included homes and vehicles being shot up along with a person being grazed by a bullet. Elijah Oates was arrested by the Indianapolis Metropolitan Police Department on Tuesday for his alleged role in these incidents. Oates […]
INDIANAPOLIS, IN・8 HOURS AGO
FOX59

INDIANAPOLIS – Jurors found a man guilty in a deadly shooting on 465. Jurors convicted Briean Brown of murder, attempted murder and assisting a criminal in connection with the December 2021 shooting that killed Miguel Emery and seriously injured another person. The trial wrapped up at the end of January, with sentencing scheduled for March. […]
INDIANAPOLIS, IN・1 DAY AGO
FOX59

INDIANAPOLIS — A 21-year-old is under arrest after a rash of shootings on Indy’s near west side that included homes and vehicles being shot up along with a person being grazed by a bullet. Elijah Oates was arrested by the Indianapolis Metropolitan Police Department on Tuesday for his alleged role in these incidents. Oates faces […]
INDIANAPOLIS, IN・1 DAY AGO
FOX59

INDIANAPOLIS – After a three-day trial, a jury convicted a man of murdering his uncle. Sylvester Ford was 16 years old when he shot and killed Devon Ford in February 2020. His case was waived to adult court, where he was charged with murder. On Feb. 16, 2020, officers with the Beech Grove Police Department […]
BEECH GROVE, IN・1 DAY AGO
FOX59

IMPD reports the number of self-defense and non-criminal homicides has risen dramatically so far this year.
INDIANAPOLIS, IN・1 DAY AGO
FOX59

NORTH VERNON, Ind. — The Indiana State Police are investigating after a Jennings County sheriff’s deputy shot and killed a man allegedly armed with a handgun Friday while attempting to serve him a warrant in North Vernon. The incident began around 2:30 p.m. when the Jennings County Sheriff’s Department’s SWAT Team responded to an address […]
NORTH VERNON, IN・38 MINUTES AGO
FOX59

FRANKLIN, Ind. — Charges have been filed against a Franklin man accused of threatening a school bus full of children, striking a police officer, and shooting up a window in his own apartment over a two-day stretch. Franklin police were first called to an apartment on Cedar Lane Drive on January 4. A tenant told […]
FRANKLIN, IN・1 DAY AGO
FOX59

The man awaiting trial for the shooting death of an Elwood Police department will spend the time before trial in state custody.
ELWOOD, IN・12 HOURS AGO
FOX59

When IMPD officers arrested Jermerrell Hubbard with a gun at the Carlton Apartments last Thursday, just six days after he was placed on probation for pleading guilty to a felony marijuana charge, their first instinct was to charge him with Level 5 Felony of Unlawful Carry of a handgun due to a previous felony conviction.
INDIANAPOLIS, IN・1 DAY AGO
FOX59

HAMILTON COUNTY, Ind. – The husband of a missing Carmel woman is being extradited back to Indiana. The Hamilton County Sheriff’s Office confirmed that Xavier Breland would be returned to custody in Indiana, although law enforcement officials didn’t have a timeline or clarify the reason for his extradition. According to online court records, Hamilton County […]
CARMEL, IN・16 HOURS AGO
FOX59

MUNCIE, Ind. — Five children were taken from the care of a Muncie mother after police were called to a home with “deplorable conditions” and a lack of running water. Judy Dotson, 38, of Muncie faces five charges of neglect of dependent, each Level 6 felonies. According to court documents, Delaware County Sheriff’s Department deputies […]
MUNCIE, IN・9 HOURS AGO
FOX59

INDIANAPOLIS — The year 2023 has gotten off to a violent start in Indianapolis. In January, IMPD was called to investigate a homicide every 36 hours. Over the first 31 days of the year, IMPD reported there were 21 total homicide victims in the city. That is the second deadliest January in recent history, behind only […]
INDIANAPOLIS, IN・2 DAYS AGO
FOX59

INDIANAPOLIS — Four people, including two wanted men, are under arrest after state troopers were led on a chase through Indianapolis early Thursday morning. According to the Indiana State Police, the chase began at around 3:45 a.m. when a trooper saw a red Hyundai at 38th Street and Shore Drive drive straight from a turning […]
INDIANAPOLIS, IN・1 DAY AGO
FOX59

INDIANAPOLIS — A man is dead and a woman is in critical condition following a shooting on Indy’s south side that also took the life of a pet dog. Officers with the Indianapolis Metro Police Department were called around 10:20 p.m. to the 5000 block of Brookfield Drive for a person shot. This is a […]
INDIANAPOLIS, IN・3 DAYS AGO
FOX59

The Kokomo Police Department said at about 6:30 p.m. on Jan. 31, an individual made purchases at the Dollar General at 211 W. Markland Ave. using seven $100 bills.
KOKOMO, IN・1 DAY AGO