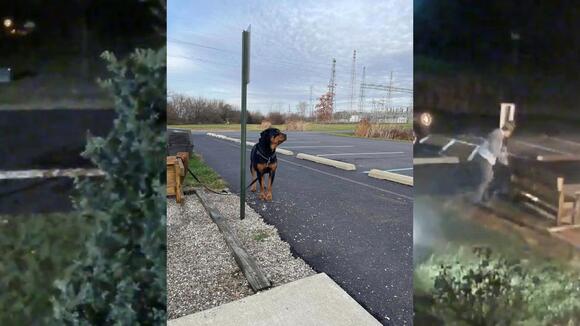 BARTHOLOMEW COUNTY, Ind. — The Bartholomew County Humane Society is trying to find out more information about a dog that was abandoned at its facility Tuesday morning.

It was in the mid-40s Tuesday morning when a worker at the Bartholomew County Humane Society arrived around 8 a.m. When she made her way to the building she encountered a sad sight.

Outside the humane society, a rottweiler waited on the sidewalk, tied to a bench with only his leash, water bowl, and food bowl for company. The dog was afraid and upset about the situation he was in.

“They weren’t sure how to get him from the front of the building to the kennel — which is at the back of our building — safe,” said Kirsten VantWoud, shelter director for the Bartholomew County Humane Society.

With the dog’s temperament, VantWoud said they had to wait until they were able to figure out how to get him to the kennel without further traumatizing him.

“We literally dragged the bench to an open gate and cut his leash off so that he could go in,” said VantWould.

It was only until staff members checked the security footage that they figured out how the dog ended up outside their facility. The camera shows a woman that seems to know the dog well tying him to the bench around 6 that morning.

“He was left there by somebody who clearly cared about him,” said VantWoud. “They were petting him and reassuring him. They left some of his belongings.”

The staff members watched the video, seeing the dog struggle to follow the woman as she left. When she was gone, he sniffed around in the dark. At some point, a work truck arrived, and he backed away from the strange vehicle as it wasn’t his person.

“After spending several hours in the cold, it’s really difficult for him,” said VantWoud. “It’s days later, and we’re still not to the point where everybody in the building can safely interact with him, and that could have been avoided had we gotten a call.”

However, VantWoud said they are making headway. They have a staff member who is able to interact with him. When that staff member came by, the dog livened up and showed that he has some tricks on his paws.

“He knows sit and stay, he can shake. Somebody has cared for this dog,” said VantWoud.

Now, the shelter is trying to figure out who left the dog behind, or anyone who knows about him so they can put him in an appropriate place. They need to know what he likes and what he doesn’t like.

After medically examining the dog and learning about his behavior, the shelter will put him up for adoption. Currently, VantWoud said, they have 49 dogs in a building designed for 36.

“I have a dog living under my desk right now in his little comfy bed because we don’t have any place for him to be right now,” said VantWoud.

VantWoud said all of the shelters that their organization is in contact with in central Indiana are at or above capacity, as many people are abandoning animals or not reclaiming their animals if they wander off.

VantWoud added that this is happening at alarming rates and is not something they usually see in this season. Usually, things are starting to slow down in the shelters this time of the year.

“We never know in a shelter situation where an animal is dumped. We don’t know whether it was dumped by an owner or dumped by somebody who found the pet,” said VantWoud.

VantWoud encourages people who are experiencing difficulties to contact their local shelter if they are experiencing behavioral problems or medical issues. They may be able to connect them with organizations to help those who can’t afford it so the owners don’t have to resort to surrendering their pets.

“We understand that people have difficulties, and we have resources to help with some of those things before you have to make a decision like in the case of this Rottweiler boy,” said VantWoud.

While the Bartholomew County Humane Society is seeing a lot of interest in this case, they want people to know that all of the dogs in their care have their own backstories. They hope they can get some of those dogs into homes before Christmas.

Anyone interested in adopting a dog from the Bartholomew County Humane Society can take advantage of its empty the shelters event through December 11. They will have reduced adoption fees. People can view animals up for adoption on the organization’s website .

It’s like a baby if you can’t take care of it take it to someone who can , I don’t see this as a crime. To me it’s a cry for help, Just take care of the dog and move on.

at least he was tied outside a shelter instead of dumped alongside a road. probably someone who couldn't afford him or care for him any longer but couldn't wait for a spot to open up (plus I've been to a couple shelters where abandoning an animal cost $40+)

In an effort to reduce the number of large dogs entering local shelters, Pet Friendly Services of Indiana has launched the "Pit Mix Fix" pilot program for owners of large dogs in Marion, Jackson, and Lawrence counties.
INDIANAPOLIS, IN・3 DAYS AGO
FOX59

TRAFALGAR, Ind. — There is a new fundraiser to help a Trafalgar police officer who was paralyzed during a pursuit in June. The injury occurred seven months ago, and a young family’s world was turned completely upside down. “I never thought that this would be a position that I would find myself in,” said Trafalgar […]
TRAFALGAR, IN・1 DAY AGO
FOX59

NORTH VERNON, Ind. — The Indiana State Police are investigating after a Jennings County sheriff’s deputy shot and killed a man allegedly armed with a handgun Friday while attempting to serve him a warrant in North Vernon. The incident began around 2:30 p.m. when the Jennings County Sheriff’s Department’s SWAT Team responded to an address […]
NORTH VERNON, IN・22 HOURS AGO
FOX59

HAMILTON COUNTY, Ind. – The husband of a missing Carmel woman is being extradited back to Indiana. The Hamilton County Sheriff’s Office confirmed that Xavier Breland would be returned to custody in Indiana, although law enforcement officials didn’t have a timeline or clarify the reason for his extradition. According to online court records, Hamilton County […]
CARMEL, IN・1 DAY AGO
FOX59

MARION COUNTY, Ind. — Two juveniles were involved in a police chase Saturday morning that resulted in a car crash. According to the Marion County Sheriff’s Office, a deputy attempted to pull over a white Ford Escape that was traveling at a high speed with no lights on. The vehicle continued driving away and led the […]
MARION COUNTY, IN・4 HOURS AGO
FOX59

JOHNSON COUNTY, Ind. — The Johnson County Sheriff’s Office is asking the public’s assistance in finding two people tied to a fraud investigation. Officials released images of two people suspected of check theft, identity deception, and fraud. Investigators said the suspected parties each cashed a check that had been stolen. If you recognize either person […]
JOHNSON COUNTY, IN・2 DAYS AGO
FOX59

Man arrested for nonfatal shooting on NE side

INDIANAPOLIS — A 21-year-old man has been arrested for his alleged role in a nonfatal shooting on the northeast side. IMPD responded to a report of a person who had been shot at 7039 American Way on Friday night. Upon arrival, officers located a victim who was alive and nursing a gunshot wound. IMPD Aggravated […]
INDIANAPOLIS, IN・41 MINUTES AGO
FOX59

Approximately one hour later police engaged in a short pursuit involving a vehicle that matched the description. Upon noticing the police, the man then proceeded to throw two firearms from the car onto the road.
INDIANAPOLIS, IN・1 DAY AGO
FOX59

FRANKLIN, Ind. — Charges have been filed against a Franklin man accused of threatening a school bus full of children, striking a police officer, and shooting up a window in his own apartment over a two-day stretch. Franklin police were first called to an apartment on Cedar Lane Drive on January 4. A tenant told […]
FRANKLIN, IN・2 DAYS AGO
FOX59

When IMPD officers arrested Jermerrell Hubbard with a gun at the Carlton Apartments last Thursday, just six days after he was placed on probation for pleading guilty to a felony marijuana charge, their first instinct was to charge him with Level 5 Felony of Unlawful Carry of a handgun due to a previous felony conviction.
INDIANAPOLIS, IN・2 DAYS AGO
FOX59

INDIANAPOLIS– Visit Indy is partnering with the Mayor’s Office and City-County Council with their new initiative to help drive visitors into neighborhoods across the city. The goal of the program is to promote businesses through different parts of Marion County. “As a consolidated city, Indy covers a lot of ground, especially for out-of-towners,” Mayor Joe […]
INDIANAPOLIS, IN・2 DAYS AGO
FOX59

INDIANAPOLIS — A man is dead following an overnight shooting that occurred inside of a food mart on Indy’s near west side. Indianapolis Metro police officers were called around 12:40 a.m. Saturday to the 3800 block of W. Michigan Street for a person shot. This is near a food mart at the intersection of Michigan […]
INDIANAPOLIS, IN・21 HOURS AGO
FOX59

INDIANAPOLIS — A 21-year-old man is under arrest after a rash of shootings on Indy’s near west side that included homes and vehicles being shot up along with a person being grazed by a bullet. Elijah Oates was arrested by the Indianapolis Metropolitan Police Department on Tuesday for his alleged role in these incidents. Oates […]
INDIANAPOLIS, IN・1 DAY AGO
FOX59

INDIANAPOLIS — A 21-year-old is under arrest after a rash of shootings on Indy’s near west side that included homes and vehicles being shot up along with a person being grazed by a bullet. Elijah Oates was arrested by the Indianapolis Metropolitan Police Department on Tuesday for his alleged role in these incidents. Oates faces […]
INDIANAPOLIS, IN・2 DAYS AGO
FOX59

IMPD reports the number of self-defense and non-criminal homicides has risen dramatically so far this year.
INDIANAPOLIS, IN・2 DAYS AGO
FOX59

Elementary school students had an unexpected visit during aftercare Tuesday.
NOBLESVILLE, IN・3 DAYS AGO
FOX59

INDIANAPOLIS — Four people, including two wanted men, are under arrest after state troopers were led on a chase through Indianapolis early Thursday morning. According to the Indiana State Police, the chase began at around 3:45 a.m. when a trooper saw a red Hyundai at 38th Street and Shore Drive drive straight from a turning […]
INDIANAPOLIS, IN・2 DAYS AGO