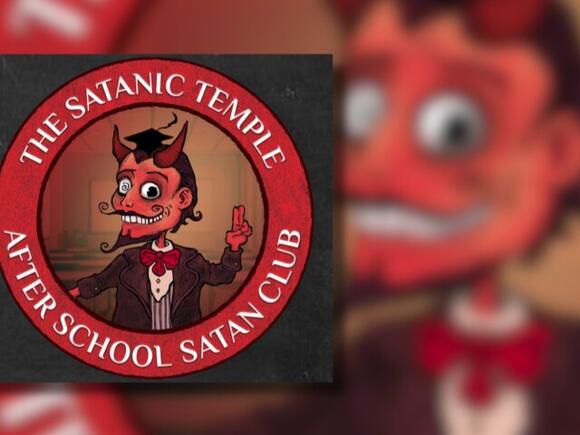 Parents of Chesapeake Public Schools are voicing concerns about a new club called the After-School Satan Club . It's supposed to have its first meeting in a few weeks at a B.M. Williams Primary School.

Some parents argue that such a club does not need to be in a school with children so young, but lawyers said the school must make room for it since it's attached to a religion.

One mom, Melanie Ballard, believes a satan club will shape her young son's mind in a sinister way.

"But now, it's okay to have devil worshipping in school around impressionable minds and age," Ballard said. "Children absorb everything they see and hear and they model what they see adults do."

June Everett, the campaign director for the ASSC said the club isn't about fire and brimstone. It's actually about brainstorming.

"We do not believe in a supernatural Satan as a symbol because legend has it that Satan was the first to start asking questions and was cast out of heaven for that reason," Everett said.

The group's flyer mentions that it's voluntary and they're not trying to convert kids. Instead, they want people to look at the world scientifically, rationally and non-superstitiously.

Everett said the first club meeting will be on Dec. 15.

"A lot of the activities are based on community projects or different kinds of crafts that you can share with families or friends. They can color in a book or make a friendship bracelet," Everett said.

Everett said the group wants to provide transparency in the club’s name.

"If we were to name it something like the 'Fluffy Bunnies' or 'Rainbow Club' and people were to find out it was run by the Satanic Temple, that would be worst," Everett said. "We do get a lot of people who say, ‘Why don’t you call it the afterschool science club or afterschool critical thinking club?' We could do that, but then when people find out it’s run by the Satanic Temple and that Satanists are the ones running the club, we feel that will create more of a problem."

Jack Preis, a professor of law at the University of Richmond, said Chesapeake Public Schools don't really have a choice but to allow the club to exist. It goes back to the First Amendment—freedom of religion. Preis said that if the school is going to allow one religious club to meet all other clubs have the right to meet regardless of ideology.

"To shut down the Satan Club would bring down clubs from other religions," Preis said.

Chesapeake Public Schools on Friday released the following statement to families. The school said that the club is not a school district-approved club and no district employee is acting as a club sponsor.

In an effort to maintain transparent practices, I would like to share the following information that was sent to the B. M. Williams school community yesterday.

Chesapeake Public Schools (CPS) is committed to open communication and transparency with our families.  For that reason, you are receiving this message to ensure you have accurate information.

The School District has long held policies and procedures in place which allow varied community groups to use our publicly funded facilities outside of the school day.  This is common practice among school districts around the state and nation.  Over the years, different religious groups have requested and been allowed to rent our facilities after hours.  By law, CPS cannot discriminate based on beliefs among groups wishing to rent our facilities.

Consistent with the law as detailed above and the criteria set out in the CPS Board policy regarding community use of facilities, the School District has approved a building use request from an organization known as the “After School Satan Club” (ASSC) to host gatherings after school hours at B.M. Williams Primary School.

Students must have parental permission to attend any after school event hosted by any outside organization.

The School Board does not approve building use forms and has not voted in this case.

Please note, we have added this item to the agenda for the next regular meeting of the School Board on December 12, 2022, for further discussion .

Citizens are welcome to attend and may address the Board during the Hearing of Citizens portion of the meeting. For more information on how to sign up to speak, visit our website .

We remain committed to working to minimize any distractions this news may create, while ensuring our focus is always on providing a safe and secure learning environment for our students.  Thank you for your understanding and support.

The letter said students may attend outside programs if they are with a parent/guardian.

According to the letter, the school board does not approve building use forms and has not voted in this case. This has now been added to the agenda for the next regular meeting of the School Board on December 12, 2022, for further discussion. For more information on how to sign up to speak, visit their website .

Ballard said she's furious and worries the school board will vote to host the club. Some parents fear it could lead to their kids being physically harmed.

"Now, I'm being concerned about the welfare of my child and other classmates of his that are maybe exposed to this satanic group," she said. "I'm very concerned about it."

Preis noted if a program after school is responsible for harming a student, then the school can get rid of it.

"They could shut it down only if it could show that it was the nature of the political beliefs being expressed in the club that caused the injury," Preis said. "So if the students were engaging in some sort of self-mutilation, yes the school can step in."

Parents like Ballard are standing their ground on the issue, and Everett said advocates for the group are doing the same. They hope to teach the adults something along with the kids.

If christians get to have religion in schools, so do other religions or lack thereof. Suck it up buttercups, it’s called freedom of religion and it’s in your constitution. Maybe go back to an actual school and learn how the government works instead of learning from your sky daddy cult.

You parents in Chesapeake raise Holly hell about them devils doing this. Don't just sit on your hands,get involved...

GOOD! Everyone thinks Satanist are bad but this is literally their mission statement "The mission of The Satanic Temple is to support empathy between people, freedom, unwillingness to tyrannical power, and protest against injustice." Oh yes, they're terrible people, "these clubs are designed to teach students about critical thinking not to introduce them to Satanism." They must be stopped! 😆🤣🤣🤣

Child in Richneck Elem. shooting did not have proper services, advocates say

A Central Virginia special education advocate said it would be "highly inappropriate" for a parent to attend school daily with their special needs child.
NEWPORT NEWS, VA・1 DAY AGO
WTKR News 3

On February 1 and 2, the Virginia Department of Education (VDOE) will present its January draft of the history learning standards to the Board of Education. Some people are still against it.
VIRGINIA STATE・16 HOURS AGO
WTKR News 3

Parents are weighing in on what they want to see in the next superintendent for Newport News Public Schools. It comes after the school board voted to fire Dr. George Parker III.
NEWPORT NEWS, VA・1 DAY AGO
WTKR News 3

Uvalde Foundation For Kids said it is working with Newport News school staff and parents as Richneck Elementary prepares to open its doors.
NEWPORT NEWS, VA・1 DAY AGO
WTKR News 3

Every day Suffolk Public Schools serves 9,000 school lunches and 6,500 breakfasts. Currently, there's a bill in the works that local lawmakers are supporting so no child goes hungry.
SUFFOLK, VA・3 DAYS AGO
WTKR News 3

The Newport News School Board is planning to discuss the potential approval of a separation agreement and severance with Superintendent Dr. George Parker III.
NEWPORT NEWS, VA・3 DAYS AGO
WTKR News 3

NN schools superintendent releases statement after board votes for removal

Dr. George Parker, III, said the Newport News School Board's vote to remove him as superintendent "was made without cause and after careful consideration of the future of NNPS."
NEWPORT NEWS, VA・2 DAYS AGO
WTKR News 3

A News 3 Investigation has been looking into waste, fraud, and abuse in government agencies and tracked down a former state employee who said he was very remorseful for his decisions.
VIRGINIA STATE・2 DAYS AGO
WTKR News 3

The student has been charged and arrested after the Hampton Police Department was told that he allegedly had a bullet on school grounds, according to police.
HAMPTON, VA・2 DAYS AGO
WTKR News 3

Virginia Beach family uses son's addiction, death as a warning for others

Richard Fee was destined to change the world, but after becoming addicted to a prescribed psychiatric drug- his life was cut short.
VIRGINIA BEACH, VA・3 DAYS AGO
WTKR News 3

Problem Gambling: Recognizing the warning signs before it becomes an addiction

Some people fear some folks gambling at the casino might not know when to cut themselves off & become addicted. Recognizing warning signs is critical and there is help available.
PORTSMOUTH, VA・3 DAYS AGO
WTKR News 3

The store has been shut down since the day of the deadly incident. Walmart has responded to three lawsuits filed by employees of the Chesapeake store.
CHESAPEAKE, VA・2 DAYS AGO
WTKR News 3

Portsmouth police are looking for a missing 19-year-old woman who is pregnant and "considered to be at high risk."
PORTSMOUTH, VA・12 HOURS AGO
WTKR News 3

We all know the saying- “the more the merrier.” But when it comes to the way we train, studies have shown exercising with others can be more beneficial than you might think.
VIRGINIA BEACH, VA・3 DAYS AGO