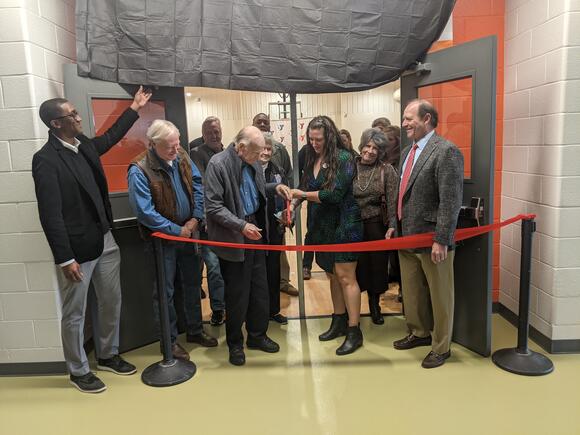 COLUMBUS, Ga. ( WRBL ) — The YMCA of Metropolitan Columbus, Georgia held a ribbon cutting ceremony Friday morning at its D.A. Turner location on Warm Springs Road to celebrate the expansion and renovation that had taken place there. Speeches took place in a new gymnasium that had been constructed during the project.

“So what we’ve done, we’ve added a youth development wing to our D.A. Turner YMCA location,” said Chris Bryant, president and CEO of YMCA of Metropolitan Columbus, Georgia in an interview. “What is done, we added a gym and two classrooms to the youth development wing. And then, in our old gymnasium, we took our old floor, which was one floor, and we converted it to two basketball floors.”

Bryant said the expansion and renovation gave the D.A. Turner YMCA an increased capacity for programming and will give children a safe space away from the adult population.

The Loudermilk family has been a major local YMCA sponsor. Bryant said that 10 years ago, the YMCA of Metropolitan Columbus, Georgia promised to do something to honor their name. But due to the recession and a resulting lack of donations, it had to hold back on building the new gym.

“Opportunity presented itself in January of 2019,” Bryant said. “We started getting the process going.”

Bryant said there was a groundbreaking ceremony in January of 2020, just before the COVID-19 pandemic struck and halted progress on the project. The building process began in 2021.

Antonio Mathis, youth sports director for YMCA of Metropolitan Columbus, Georgia, said he expects the D.A. Turner YMCA to attract more participants thanks to the expansion and renovation.

“We needed it,” he said. “We needed it. In the past that we had too many kids but a little space.”

“It definitely gives a chance for more children to be a part of our programs,” said Jed Tuiolosega, assistant branch director and childcare director of the D.A. Turner YMCA.

At the ceremony, Bryant gave a welcoming speech, and Dr. Jimmy Elder of First Baptist Church in Columbus gave the invocation.

Cecil M. Cheves, chairman of the board of directors for the YMCA of Metropolitan Columbus, Georgia, gave opening remarks.

“I’m still a little slack-jawed as I look at this beautiful, beautiful building,” he said. “And what we’re seeing is the reality of a dream come true.”

Cheves thanked all who had contributed to the project, who were listed in the program as:

“You’ve got to remember – 10, 12 months ago, this was a mud pit right here,” said William Bray of Thayer-Bray Construction.

Bray said staff at the D.A. Turner YMCA were cooperative during construction.

“It’s a privilege and an honor to have been a part of such a project and something that benefits our community,” he said.

Joey M. Loudermilk recognized his family members in the audience. He said he and they were pleased to be a part of the project. He described the D.A. Turner YMCA as a “clean, safe place to come and exercise.”

Attendees went into the hallway for the ribbon cutting. Jillian Albe, executive branch director of the D.A. Turner YMCA, cut the ribbon.

COLUMBUS, Ga. (WRBL)— The Veterans of Foreign Wars provides assistance and support to America’s service members, veterans and their families. Monday, members of local Post 665 joined together to continue their support for fellow Americans. According to the American Red Cross, every two seconds someone in the U.S. needs blood or platelets. In fact, one […]
COLUMBUS, GA・9 HOURS AGO
WRBL News 3

COLUMBUS, Ga. (WRBL) — Patriot Challenge began more than ten years ago when Army Ranger Cory Smith ran 565 miles from Fort Benning, Georgia, to his home in Indianapolis, Indiana, with the intent to bring awareness to the transitioning difficulties many service members face. Cory sought to be the physical embodiment of challenges facing transitioning […]
COLUMBUS, GA・1 DAY AGO
WRBL News 3

LaGRANGE, Ga. (WRBL) – Thousands of families were impacted by the devastating storms that blew through parts of Alabama and Georgia on Jan. 12.   In LaGrange, recovery specialists from FEMA and the U.S. Small Business Administration are providing information on available services, explaining assistance programs and helping survivors complete or check the status of […]
LAGRANGE, GA・1 DAY AGO
WRBL News 3

COLUMBUS (WRBL) – Two teams with state championship aspirations picked up big wins on Tuesday night. The Spencer Greenwave improved to 18-4 and 11-0 in region play by defeating Southwest. Over in Midtown, Pacelli moved to 16-4 on the season by defeating Strong Rock. Catch the highlights in the video player above.
COLUMBUS, GA・1 DAY AGO
WRBL News 3

LaGRANGE, Ga. (WRBL) — The City of LaGrange is holding its monthly litter cleanup on Saturday, Feb. 4. The family-friendly event is free and open to the public, with participants picking up litter from 8 a.m. until 10 a.m. Volunteers are meeting at the LaGrange Fire Department’s headquarters on 115 Hill Street. The City of […]
LAGRANGE, GA・2 DAYS AGO
WRBL News 3

COLUMBUS, Ga. (WRBL) — The unions representing about 400 East Alabama papermill workers voted Tuesday to accept the company’s latest contract offer. West Rock union workers have been locked out of the Cottonton mill since early October. This was not a strike. It was a lockout by WestRock of the union employees after months of […]
COTTONTON, AL・2 DAYS AGO
WRBL News 3

COLUMBUS, Ga. (WRBL)— In 2022, the City of Columbus had nearly 30 traffic-related fatalities. One of which Columbus Police say they directly attribute to street-racing. The Columbus Police Department defines street racing as, “two or more cars or vehicles in an attempt for some type of competition, trying to out race out drive another driver.” […]
COLUMBUS, GA・9 HOURS AGO
WRBL News 3

COLUMBUS, Ga. (WRBL) — The Columbus Police Department is holding a five-week-long “Pastor’s Academy” course. The Columbus Police Department says the course is “designed to provide faith-based leaders with an understanding about various police functions.” Attendants may be able to interact with department officers, command staff and participate in ride-alongs. According to a press release, […]
COLUMBUS, GA・3 DAYS AGO
WRBL News 3

VALLEY, Ala. (WRBL) – A east Alabama woman is found dead and her husband is in the hospital after an early morning fire in Valley. According to Valley police chief Mike Reynolds around 2:30 Thursday morning officers along with the East Alabama Fire Department responded to a fully involved house fire in the 1100 block […]
VALLEY, AL・9 HOURS AGO
WRBL News 3

Authorities in Russell County have confirmed a 12-year-old boy has died following a shooting on Wednesday night. Russell County Coroner Arthur Sumbry Jr. pronounced the victim dead at 8:53 p.m. The shooting occurred in the 3600 block of U.S. highway 80. The victim’s body will be sent for an autopsy on Thursday. Stay with WRBL […]
RUSSELL COUNTY, AL・19 HOURS AGO
WRBL News 3

LaGRANGE, Ga. (WRBL) — Last Friday, Jan. 27, Quay Boddie was sworn into office as the city councilman. Last Tuesday on Jan. 22, a council meeting was held and Boddie was unanimously selected as the city councilman by council members. Councilmen Willie T. Edmondson and Jim Arrington have resigned from running for mayor. With only […]
LAGRANGE, GA・3 DAYS AGO
WRBL News 3

AUBURN, Ala. (WRBL) – On Tuesday, the Auburn Police Department (APD) announced the release of APD Deck, a set of collectible K9 trading cards, which includes a card for each of the police department’s eight K9s and their handlers. According to Auburn Police Department, the K9 Unit consists of eight police dogs specifically trained to […]
AUBURN, AL・2 DAYS AGO
WRBL News 3

COLUMBUS, Ga. (WRBL) — A tax preparer based in Columbus pled guilty to submitting false tax credit claims for her clients and failing to pay personal taxes, according to the United States Attorney’s Office for Middle District Georgia. Nadine Word, 35, pled guilty on Feb. 2 to a count of aiding and assisting in the […]
COLUMBUS, GA・5 HOURS AGO
WRBL News 3

Columbus, Ga. (WRBL) – Black athletes are prominent in the sports landscape. One place that black players are still more of a rarity is in the hockey rink. On January 18th, 1958 Willie O’Ree became the first black player to play in the National Hockey League. Today, the NHL still has less than 10 percent […]
COLUMBUS, GA・1 DAY AGO
WRBL News 3

Opelika, AL (WRBL) – The Beauregard Girls Bowling Team made school history by capturing the program’s first AHSAA State Championship. The Lady Hornets defeated Scottsboro with a final score of 576-434 pins. The team says the best part of this championship victory was sharing it with each other. “It was really special because it was […]
OPELIKA, AL・11 HOURS AGO
WRBL News 3

COLUMBUS, Ga. (WRBL) — Rain continues to move in while becoming heavier especially during the overnight hours. Rainfall estimates are projected around 1-1.5” as this system pushes through. Cool temperatures will accompany the rain showers with readings dipping in the low 40s. Showers linger into the early morning hours of Friday with clearing skies throughout […]
COLUMBUS, GA・1 HOUR AGO