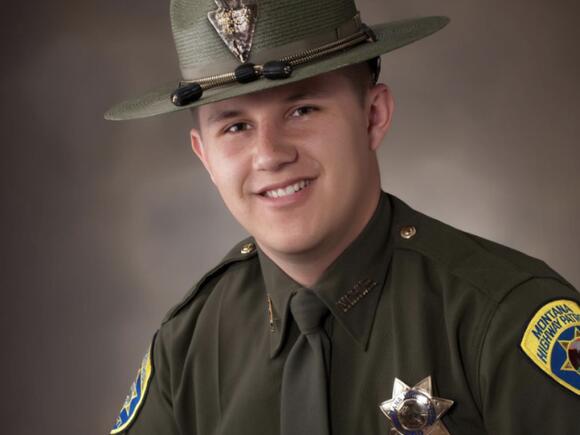 Trooper David DeLaittre with the Montana Highway Patrol gave the ultimate sacrifice 12 years ago. His father, along with dozens of other community members gathered in Three Forks at his memorial on Thursday.

“He was 23 years old when he was killed, but he started his career when he was about 21 years old. He was a hard-working kid and a likable kid,” says Denny DeLaittre, the father of David.

David DeLaittre was shot and killed during a traffic stop on Dec. 1, 2010. Trooper DeLaittre served MHP for two years and died at 23 years old. His Father Denny established a memorial as a way to remember his late son.

“I wanted these officers to be remembered a little bit more than just their name on the wall,” says Denny.

MHP Sergeant Jay Nelson worked with Trooper DeLaittre and says he was an exceptional addition to the force.

“He was always eager to go out and to work and to do better and he had such a bright future ahead of him,” says Sergeant Nelson.

Every year, members of MHP and the community gather at the memorial to remember DeLaittre and other fallen troopers.

“It was their duty to serve," says Nelson, "It's our duty to remember.”

“We have a program called Deadly Encounters where we put young troopers as well as old troopers every year back into scenarios just like the scenario David was in,” says Nelson.

With all the love and support from the community, Denny DeLaittre couldn't be more appreciative.

Food insecurity is on the rise among children in the Gallatin Valley. The Bozeman Schools Foundation's Pack the Sack program has seen a 25% increase in demand just in one school year.
BOZEMAN, MT・9 HOURS AGO
KBZK News

I-90 reopens between Logan and Manhattan after cattle trailer crash

The Montana Department of Transportation reports that traffic is being diverted off I-90 in both directions between Logan and Manhattan due to a commercial vehicle crash in the median.
MANHATTAN, MT・4 DAYS AGO
KBZK News

Multiple agencies responded to the fire at 12:30 AM, which took about six hours to contain. Zach Proffit, with Park County Rural Fire, said their crew worked for about 12 hours.
LIVINGSTON, MT・10 HOURS AGO
KBZK News

Dozens of crashes were reported before the shutdown, including an overturned tanker carrying asphalt oil.
LIVINGSTON, MT・6 DAYS AGO
KBZK News

January was National Stalking Awareness Month, and Haven wanted to spread awareness about the act of stalking, as well as how methods of stalking have changed.
BOZEMAN, MT・6 DAYS AGO
KBZK News

Across town, it was a battle of the top two Eastern AA teams, according to MontanaSports.com latest rankings, as No. 2 Bozeman High hosted No. 1 West.
BOZEMAN, MT・2 DAYS AGO
KBZK News

A multi-phase project in north Bozeman is expected to bring plenty of commercial and residential properties to the area.
BOZEMAN, MT・5 DAYS AGO
KBZK News

Weston Brown does it all — he's a star runner, star student and star member of the community. And the most impressive part of it all, this past fall was his first season of cross country.
BOZEMAN, MT・1 DAY AGO
KBZK News

The City of Bozeman and The Trust for Public Land are moving forward on a fun new activity for kids at Story Mill Park—a splash pad.
BOZEMAN, MT・7 DAYS AGO