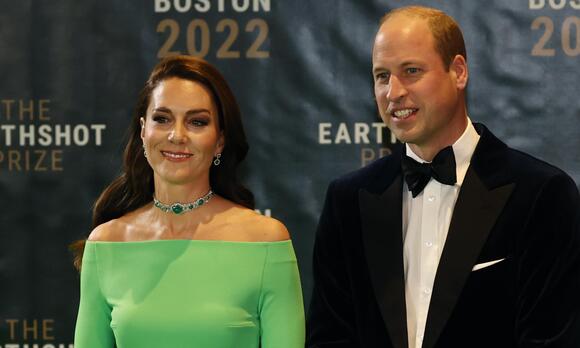 The Prince and Princess of Wales are due to end their three-day trip to Boston on a high note, having landed in the middle of a palace racism row and then been blindsided by a trailer for the Sussexes’ documentary.

A meeting with Joe Biden, and a star-studded award ceremony for Prince William’s environmental Earthshot prize , were scheduled to round off what could be described as a bumpy few days.

On Friday evening William met the US president, shaking hands and chatting near the John F Kennedy Memorial Library and Museum. PA media reported that Biden joked about William wearing just a suit as opposed to a winter coat in the chilly weather, asking: “Where’s your top?”

The Prince of Wales also met Caroline Kennedy, the late president’s daughter, and paid tribute to the “man who inspired our mission” with his moonshot speech in 1962 that set the US on the path to reach the moon. The royals’ prize is designed to recognise a similar level of innovation.

The Earthshot ceremony later on Friday, where Billie Eilish will lead a lineup including Annie Lennox, Ellie Goulding and the Beyoncé proteges Chloe x Halle performing at the MGM Music Hall in Boston, will bring to a close the Waleses’ first visit to the US in eight years.

Headlines and TV bulletins, though, have inevitably been about the royal racism row that engulfed William’s godmother, the former lady-in-waiting Susan Hussey, which again resulted in the monarchy being accused of being institutionally racist, and about that Sussex trailer .

William and Kate were in the air, en route to Boston, as Lady Hussey resigned her honorary role after what Buckingham Palace described as “unacceptable and deeply regrettable” remarks when asking the black charity founder Ngozi Fulani about where she “really came from” at a palace reception.

Then, on their second day in the US, came the online release of the one-minute teaser for the Duke and Duchess of Sussex’s forthcoming Netflix docuseries, complete with photographs of Meghan apparently in tears and a thunderous-looking Kate.

For the Waleses’ part, a Kensington Palace spokesperson reiterated comments made before the visit that the couple would not be “distracted” by other matters this week, and their focus was on meeting communities and local people across Boston.

But reports from those on the ground with the couple indicated this may have been something of a challenge. The Times suggested the Sussexes had “deliberately torpedoed” the visit, saying the mood within the Wales camp was one of “resignation, even amusement, rather than anger”. The Mail proclaimed it a “declaration of war” by the Sussexes. Sussex sources, meanwhile, have reportedly put the provocative timing squarely at the door of Netflix.

While in Boston, where crowds braved the cold and rain to greet them, the prince and princess have visited budding environmental tech entrepreneurs at Greentown Labs, and a very chilly Boston waterfront area threatened by rising sea levels. They also visited Roca, a non-profit organisation focusing on urban youth violence, and sat courtside at an NBA game between the Boston Celtics and Miami Heat. The princess also visited the Center on the Developing Child at Harvard University.

At the Earthshot awards, now in their second year, 15 finalists are vying for £1m awarded to each of five category winners. They include a cleaner type of stove in Kenya and a bubble barrier in the Netherlands that prevents plastic entering oceans. Finalists from the UK, for the first time, are Notpla, which makes seaweed- and plant-based packaging, and Low Carbon Materials, which uses plastic waste to make carbon-zero concrete blocks.

Harry and Meghan are not expected to attend the environmental awards on Friday. They will, however, be flying to the east coast next week to attend the Ripple of Hope human rights awards in New York on Tuesday, where they are being feted for speaking out about the alleged racism they experienced as part of the royal family.

Nice to have REAL ROYALS here! Thank you PRINCE AND PRINCESS OF WALES! Let’s not pay any attention to Null & Voids relentless made up attacks on the Monarchy

I hope Prince William and Katherine of Wales don't look to harsh the people in the U S. There are more who love and Honor the two of you then the few who just can't growup. You're an amazing couple. God Bless

Megan and Harry so hateful and jealous of Prince William and Princess Catherine and they are the ones that left!! What spoiled self serving twits Megan and Harry are.

Volodymyr Zelenskiy is finally getting the help he wants, but it places more of Ukraine’s future in US hands, says Guardian columnist Martin Kettle
WASHINGTON STATE・2 DAYS AGO
Page Six

Amy Robach jets out of NYC after news of another alleged T.J. Holmes affair

She’s getting out of Dodge. Amy Robach was spotted arriving at JFK Airport on Tuesday to catch a flight out of New York City after reportedly getting blindsided by yet another T.J. Holmes affair. The ABC News reporter, 49, was photographed putting on a brave face as she smirked at the paparazzi while entering the airport. At the time, she wheeled a light blue carry-on suitcase while dressed in black leggings, a hoodie, boots and a tan coat with her hair pulled back. Earlier this week, a source claimed to the US Sun that Robach felt like “collateral damage” due to the “scope of...
NEW YORK CITY, NY・2 DAYS AGO
The Guardian

A moment that changed me: three schoolboy truants convinced me to become a teacher

The day I attended my interview for a job teaching at a challenging north London comprehensive school hadn’t begun in a particularly surprising way. I knew the score: prospective teachers are expected to take a lesson, then are given a tour of the school by student prefects and, finally, interviewed by the headteacher. It wasn’t until after I’d completed my morning teaching that things started to take an unconventional turn.
2 DAYS AGO
The Guardian

A MAN has been left devastated after flying back from a holiday to find his £2,850 van had vanished - before turning up 5 miles away a week later. Freddie Hall, 60, had paid £105 to a meet and greet parking firm at Heathrow airport for while he went on holiday in San Francisco.
1 DAY AGO
The Guardian

Teresa Maher’s son, Kyle, was killed by Richard Wilson-Michael in supported accommodation in London in 2017
2 DAYS AGO
The Guardian

Claims that the boss of the Wagner Group, a key part of Russia’s military machine, was aided in a libel action must be run to ground, says shadow chief secretary to the Treasury Pat McFadden
2 DAYS AGO
The Guardian

A hospital in Harlow has withdrawn painkilling gas and air for women because of the air quality of its maternity unit after high levels of nitrous oxide were found. The Princess Alexandra hospital in Essex is the latest to withdraw the treatment. The Health and Safety Executive is already investigating Basildon hospital amid concerns over staff exposure to high levels of nitrous oxide used in Entonox.
2 DAYS AGO
The Guardian

Producers blame avian flu for the soaring costs, but one farmers’ group is airing accusations of price-gouging
MARYLAND STATE・1 DAY AGO
The Guardian

Exclusive: Insiders believe depth of inquiry and severity of some claims means deputy PM will struggle to keep job
1 DAY AGO