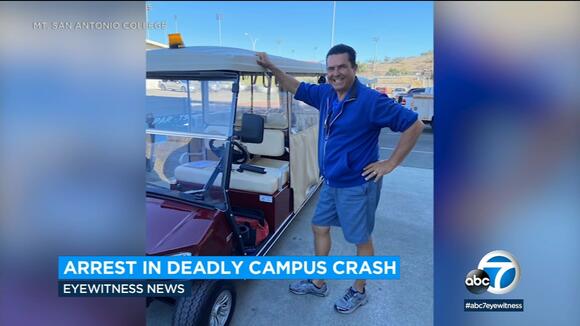 A former employee of Mt. San Antonio College has been arrested for allegedly running down and killing a 63-year-old tram driver at the school, officials said Friday. Investigators arrested James E. Milliken on suspicion of murder, according to a note from college president Bill Scroggins. The Los Angeles County Sheriff's Department confirmed Milliken's arrest for murder and said he remains in custody but did not provide further details. Milliken is suspected of intentionally running over Rafael "Ralph" Barragan Jr., a 63-year-old driver who transported students with disabilities for the school's ACCESS program. Barragan had worked for the campus since July 2007. Milliken was described as a former employee of the college who also worked as a driver for the ACCESS program from October 2016 until he resigned in September 2021. "Losing Ralph has been heartbreaking for our campus community," Scroggins wrote. "The circumstances of his passing are additionally painful." No additional details on the motive for the alleged killing have been released at this time. Barragan started working at the school after a 23-year career as a bus driver for the Metropolitan Transportation Authority. "Ralph was highly visible on campus, gracious, popular and respected." Barragan died on campus Thursday morning after Los Angeles County deputies arrived to find him unresponsive and suffering from trauma.

A man was struck by a vehicle and killed at Mt. San Antonio College in Walnut in what authorities described as an apparently "intentional act."

The driver accused of hitting Barragan was treated for his injuries at a local hospital and was detained by authorities. Anyone with additional information about the incident is to call the sheriff's Homicide Bureau at (323) 890-5500.

Ralph was the nicest man ever. Full of humor and very positive, he did this job for joy and to help others. Prayers for his family during this extremely difficult time.

Video of a driver defending his rights as he denied a Costa Mesa police officer access to a vehicle for a search has gone viral on social media.
COSTA MESA, CA・1 DAY AGO
ABC7

The acting consul of Chinese Consulate General in L.A. said the daughter of one of the victims is currently in China and is applying for a travel Visa to visit Monterey Park.
MONTEREY PARK, CA・2 DAYS AGO
ABC7

The man who disarmed the Monterey Park mass shooter less than half an hour after the massacre is set to receive a special honor for his actions.
ALHAMBRA, CA・2 DAYS AGO
ABC7

A couple in Arcadia is selling doughnuts to raise money for the victims of the Monterey Park mass shooting. It's an effort to honor the victims, including one who was very close to the couple.
MONTEREY PARK, CA・2 DAYS AGO
ABC7

L.A. Sheriff Robert Luna said Monterey Park Police found a motorcycle just one block away from the crime scene that was registered to Huu Can Tran.
MONTEREY PARK, CA・2 DAYS AGO
ABC7

Family and friends honored Elliot Blair, an Orange County lawyer who died on vacation in Mexico, during a vigil Thursday night, as questions remain about the circumstances of his death.
ORANGE COUNTY, CA・1 DAY AGO
ABC7

Monterey Park Chief Scott Wiese defended his decision not to warn the public for hours that a killer was on the loose, saying he didn't have enough information to effectively alert residents.
MONTEREY PARK, CA・3 DAYS AGO
ABC7

A chase involving a motorcyclist ended with a dramatic takedown Thursday night in the streets of Compton.
COMPTON, CA・2 DAYS AGO
ABC7

A man armed with a gun was shot and killed by a Los Angeles County sheriff's deputy while a search warrant was being served at a home in Maywood, authorities said.
MAYWOOD, CA・2 DAYS AGO
ABC7

A driver was taken into custody after leading authorities on a high-speed chase from Long Beach through Orange County Thursday.
ORANGE COUNTY, CA・2 DAYS AGO
ABC7

Lost in the aftermath of the Monterey Park ballroom dance hall shooting that left 11 people dead is an alarming fact: It took five hours for authorities to alert the public that the gunman was on the loose.
MONTEREY PARK, CA・4 DAYS AGO
ABC7

Activists took to the streets of Los Angeles to protest police brutality after the release of video showing the fatal beating of Tyre Nichols at the hands of former Memphis police officers.
LOS ANGELES, CA・1 DAY AGO
ABC7

One person was rushed to the hospital with injuries after an explosion occurred on the University of Southern California campus Thursday afternoon, authorities said.
LOS ANGELES, CA・2 DAYS AGO
ABC7

In gruesome detail, prosecutors spelled out allegations of torture and child abuse they say led to the death of Anthony Avalos.
LANCASTER, CA・3 DAYS AGO
ABC7

Xiujuan Yu, 57, along with her husband and three children came to the U.S. from China in the 2010s. The couple worked tirelessly to make ends meet and support their children's academic dreams for a better future in America.
MONTEREY PARK, CA・4 DAYS AGO
ABC7

This come as the U.S. Attorney for the Central District of California unveiled a new public service announcement called "Death in Disguise," warning people about the dangers of fentanyl.
ORANGE COUNTY, CA・2 DAYS AGO
ABC7

The cast and crew of the Oscar-nominated film "Everything Everywhere All at Once" honored the victims of the Monterey Park massacre with a touching Lunar New Year celebration at one of the city's popular restaurants.
MONTEREY PARK, CA・3 DAYS AGO
ABC7

Authorities have arrested a suspect allegedly seen in a video crashing a dump truck into his estranged wife's home in South Los Angeles and smashing into parked cars on the street.
LOS ANGELES, CA・4 DAYS AGO