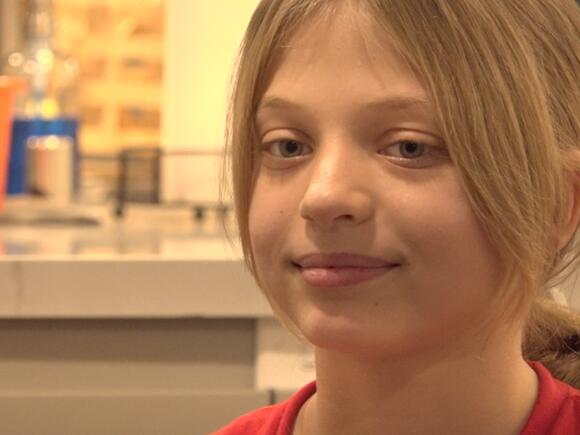 SAN DIEGO, Calif. (KGTV) — A mother and daughter from Ukraine are recovering here in San Diego after both lost limbs in a Russian attack overseas.

The daughter, Yana, is 11-years-old. From her beautiful smile and cheerful spirit, you would never know what she and her mother, Natalia, have gone through.

Natalia Stepanenko explained they were waiting to board a train in Ukraine when they were caught in a Russian missile attack back in April.

“Everything went black all of a sudden. She felt like she passed out. Everybody was down. And when she came to… nobody was standing,” said a translator helping with the interview.

Yana lost both legs below her knees; Natalia lost one. When Natalia thinks back on that day, she says it’s “impossible to explain.”

Both have been receiving prosthetic care and treatment here in San Diego, and Yana just recently underwent surgery.

If you ask Yana how she’s remained so strong and upbeat through it all, she’ll tell you she doesn't dwell on the tragedy of the situation.

“She keeps herself busy. She communicates with her friends in Ukraine, and she has friends here, so she doesn't spend too much time thinking about bad things,” said the translator.

Yana says instead, she focuses on the good things — like her new friends in the U.S. and her passion for art.

She offered this advice for anyone facing the seemingly impossible: Keep calm, do not worry and life will continue.

While the Right to Walk Foundation has been helping cover the cost of Natalia and Yana’s prosthetic care, the family is still in need of financial assistance, as they’ve been restarting their life here in San Diego.

If you’d like to make a donation to help the mother and daughter follow this link. Donations through the House of Ukraine are tax-deductible.

A United Airlines flight was forced to return to San Diego International Airport Tuesday morning after a fire was reported on the plane.
SAN DIEGO, CA・17 HOURS AGO
ABC 10 News KGTV

A female passenger was ejected and killed, and the driver was arrested in a single-vehicle crash on a downtown San Diego street early Monday morning.
SAN DIEGO, CA・1 DAY AGO
ABC 10 News KGTV

Millions of dollars in federal funding is expected to make waves in Imperial Beach. The city’s new mayor is hopeful that money will solve problems with pollution in the water.
IMPERIAL BEACH, CA・9 HOURS AGO
ABC 10 News KGTV

A notice appeared near a roadside memorial in Jamul for fallen troops demanding it is taken down, sparking anger and confusion.
JAMUL, CA・4 DAYS AGO
ABC 10 News KGTV

Just in time for Valentine’s Day, OpenTable released its list of their 100 Most Romantic Restaurants in America for 2023 -- and three San Diego eateries are getting tons of love from reviewers.
SAN DIEGO, CA・1 DAY AGO
ABC 10 News KGTV

ABC 10News speaks with several eyewitnesses who say homeless-related crime in their apartment complex is on the rise following an officer-involved shooting on Saturday.
CHULA VISTA, CA・1 DAY AGO
ABC 10 News KGTV

Car rolls over into wall in Chula Vista, woman trapped in vehicle rescued

Firefighters rescued a woman who was trapped in a car that rolled over into a wall in Chula Vista early Tuesday morning.
CHULA VISTA, CA・19 HOURS AGO
ABC 10 News KGTV

A driver suffered a medical emergency, which caused his car to go off the Otay Mesa (905) Freeway in San Diego Saturday evening.
SAN DIEGO, CA・2 DAYS AGO
ABC 10 News KGTV

Marc Glazer says he noticed a sinkhole near his property line in June of 2021. Despite repeated requests, he says the City of San Diego has not made progress towards fixing the problem.
SAN DIEGO, CA・1 DAY AGO
ABC 10 News KGTV

The San Diego County Sheriff's Department is asking for the public's help to identify and find the person who tried to kidnap a child walking to school Tuesday morning.
LAKESIDE, CA・5 HOURS AGO
ABC 10 News KGTV

An 84-year-old man was arrested in connection with the shooting death of a 78-year-old woman in a Skyline-area home, San Diego Police said Monday.
SAN DIEGO, CA・1 DAY AGO
ABC 10 News KGTV

Biden's visit is part of a California trip in support of the administration's efforts regarding cancer treatment and initiatives for military and veteran families.
SAN DIEGO, CA・4 DAYS AGO
ABC 10 News KGTV

Residents say they didn't receive any notice before a series of loud 'bangs' and military helicopters that landed near Liberty Station.
SAN DIEGO, CA・6 DAYS AGO