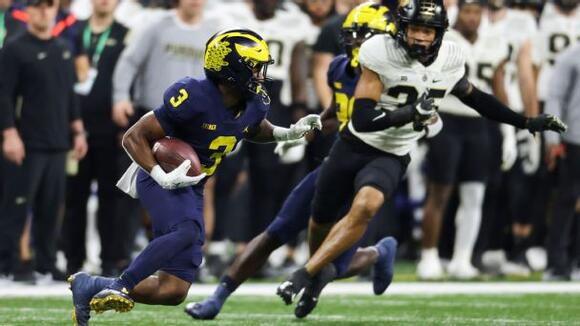 The final weekend of the college football season was full of highly entertaining, high-stakes matchups.

There is legitimate College Football Playoff drama. The No. 4 USC Trojans are out after their loss to the No. 11 Utah Utes in the Pac-12 title game. The No. 3 TCU Horned Frogs will have to await their fate after losing in overtime to the No. 10 Kansas State Wildcats .

The SEC, however, will be drama-free. At least as it pertains to Georgia. The Bulldogs cruised past LSU and locked themselves into the No. 1 spot in the final playoff ranking.

USC's loss is the Ohio State Buckeyes ' gain. Ohio State was No. 5 in the last ranking. TCU's loss could put the No. 6 Alabama Crimson Tide back in the mix.

The No. 2 Michigan Wolverines closed the day's action by defeating the Purdue Boilermakers .

They'll all know where they stand when the final College Football Playoff rankings are announced at noon ET on Sunday.

Here are the top plays, biggest moments and playoff takeaways from championship weekend.

It wasn't always pretty, as Michigan allowed a pesky Purdue team to hang around into the fourth quarter, but the Wolverines ultimately won the Big Ten title and should remain the committee's No. 2 team on Selection Day. The bigger question is if fans will see a semifinal rematch between the Big Ten's biggest rivals, which would happen if Ohio State moves to the No. 3 spot and TCU falls to No. 4 following its loss to Kansas State in the Big 12 championship. The committee is instructed not to consider rematches when it's ranking its final top 25. -- Heather Dinich

Running back Blake Corum's injury has changed the way Michigan approaches games and who it must lean on to win. For the second straight game, the Wolverines turned to a group of young, highly recruited players to step up for Corum, who underwent knee surgery Friday and did not attend the Big Ten championship.

Quarterback J.J. McCarthy and running back Donovan Edwards -- ESPN's No. 25 and No. 68 recruits in the 2021 class -- continued to shine, accounting for four Michigan touchdowns against Purdue. Freshman cornerback Will Johnson , ESPN's No. 23 recruit in the 2022 class, intercepted Purdue standout quarterback Aidan O'Connell twice, doubling his season total entering the game. Defensive end Jaylen Harrell , a top 200 recruit in the 2020 class, had two sacks, eclipsing his season total. As Michigan returns to the CFP, it must keep finding new contributors and different paths to success. -- Adam Rittenberg

Donovan Edwards gets to the end zone

Playoff takeaway: Locked into No. 1

This will be the easiest part of the selection committee's night.

Georgia further solidified itself as the No. 1 team in the country Saturday evening with its lopsided win over No. 14 LSU in the SEC championship game. Regardless of how soundly Michigan might beat Purdue in the Big Ten title game, there won't be any debate over who's No. 1 on selection day. If Michigan didn't leapfrog Georgia in the fifth ranking after it beat then-No. 2 Ohio State, it's certainly not going earn a promotion for beating an unranked, four-loss Purdue team.

The only question for Georgia is who it will face at No. 4 in a CFP semifinal. -- Heather Dinich

If there was an image that encapsulated the SEC championship Saturday, it was this: Georgia star defensive lineman Jalen Carter knifing through the LSU offensive line and wrangling quarterback Jayden Daniels for a sack before lifting him up off the ground his left arm and holding out his right index finger to signal No. 1.

The message might have been twofold. Carter showed why he's in contention to be the top pick in next year's NFL draft and why his team is the clear-cut top-seed in the College Football Playoff. When LSU showed some brief signs of life in the second half, like going for it on fourth-and-1 inside the red zone, it was Carter who helped stuff the run for no gain and a turnover on downs.

Georgia dominated LSU from start to finish to win. Even special teams got the job done as Nazir Stackhouse blocked a field goal attempt, Christopher Smith picked it up and ran 96 yards for a touchdown.

The Bulldogs' offense was no slouch, either. Stetson Bennett was ruthlessly efficient, completing 23 of 29 passes for 274 yards, four touchdowns and no interceptions. The running game, led by Kendall Milton , pitched in with 255 yards and two scores. -- Alex Scarborough

LSU turns a turnover into a TD

If TCU was going to lose to Kansas State in the Big 12 championship game, this was how it had to happen -- the overtime, 31-28 defeat gives the Frogs a good chance to remain in the top four, but until it's official an air of uncertainty will loom.

The selection committee has to concur that TCU is "unequivocally" one of the four best teams in the country -- meaning there has to be no doubt within the room that the Frogs belong in the top four without the Big 12 title. If that's the case, they don't necessarily have to resort to tiebreakers, but the committee will at least compare TCU and Alabama side-by-side on large monitors in the center of the room.

TCU just lost a close game to a top-10 team -- the same team it beat during the regular season. The Frogs also have a common opponent with Alabama -- they both beat Texas on the road -- and that will be considered. Alabama's best wins are at Texas, against Ole Miss, and Mississippi State, which is now a top-25 team.

A two-loss team has never made the CFP before, though, and Alabama didn't win its division. The bigger debate in the room might be if Ohio State moves up to No. 3 without winning its division while the Frogs drop to No. 4. -- Heather Dinich

Kansas State finally found the antidote to TCU's magic. After withstanding a furious 11-point comeback to get to overtime -- including TCU's Max Duggan rushing for 95 yards on an 80-yard drive due to penalties to tie the game -- the Wildcats stopped Kendre Miller twice from the 1-yard line, including on fourth down in the first half of overtime. As a result, K-State was able to play it safe and kick a field goal to walk off with a 31-28 win to claim a Big 12 championship for the third time in school history. Deuce Vaughn was the backbone for the Wildcats as usual, carrying it 26 times for 130 yards and a touchdown, adding two catches for 30 yards. -- David Wilson

With No. 4 USC losing to Utah on Friday night in the Pac-12 championship game, the No. 5 Buckeyes (11-1) should slide right into the top four on selection day. The committee will justify the move with Ohio State's wins against Penn State and Notre Dame, plus its lone loss was to a top-four team in Michigan. It's extremely unlikely and unexpected for two-loss No. 6 Alabama to leapfrog Ohio State at this point, which is why the fifth ranking was so important. The Buckeyes will maintain their edge over the Tide, whose last hope would be for undefeated TCU to lose convincingly to K-State in the Big 12 title game -- and even that might not be enough.

USC's Friday night flop was an all-too familiar finish for the Pac-12 with the selection committee watching together here in their meeting room at the Gaylord Texan Resort in Grapevine, Texas. They're not going to reward three-loss conference champion Utah with a top-four spot, and two-loss USC simply doesn't have the defense to make a case as Pac-12 runner-up -- especially with a second loss to the same team. Utah should be heading to the Rose Bowl again but that will be the league's ceiling this year. -- Heather Dinich

Tommy Rees is leaving Notre Dame for Alabama, so what does this mean for both programs?
TUSCALOOSA, AL・2 DAYS AGO
ESPN

Predicting South Carolina-UConn: Who wins? Does a lack of depth catch up with the Huskies?

Can the Huskies, who have dealt with injury and illness all season, overcome Aliyah Boston and the No. 1 Gamecocks, who have the best depth in the country?
COLUMBIA, SC・2 DAYS AGO
ESPN

South Carolina's Monteque Rhames II, one of three freshmen who were suspended, is being held on charges of carrying weapons on school property and obstructing justice.
COLUMBIA, SC・2 DAYS AGO
ESPN

Duke coach Kara Lawson said the teams played with a men's basketball for the first half of a loss to Florida State on Sunday.
TALLAHASSEE, FL・2 DAYS AGO
ESPN

Sources: Steele heads back to Alabama as defensive coordinator

The Raiders have granted QB Derek Carr permission to speak with teams that have already agreed to the compensation Las Vegas is looking for in a potential trade, sources told ESPN.
LAS VEGAS, NV・2 DAYS AGO
ESPN

With veterans such as Tom Brady and J.J. Watt retiring, the next generation is ready to take over, as evidenced by the Pro Bowl rosters.
14 HOURS AGO
ESPN

Aliyah Boston scored 26 points, including 14 in the fourth quarter, to help No. 1 South Carolina defeat UConn 81-77 on Sunday in Hartford, Connecticut in a contest that Gamecocks coach Dawn Staley said "was a great game for college women's basketball."
HARTFORD, CT・6 HOURS AGO
ESPN

'It's been a journey': The Brown twins' long road toward NFL dreams

Chase Brown finished second in the nation in rushing. Sydney Brown is an all-Big Ten defensive back. On the way to those accolades the twins had to make serious sacrifices.
CHAMPAIGN, IL・2 DAYS AGO
ESPN

A misdemeanor menacing charge against Bengals running back Joe Mixon has been dismissed. Authorities reserved the right to refile the case at a later date.
CINCINNATI, OH・2 DAYS AGO
ESPN

Washington, led by Elle Ladine, knocks off No. 2 Stanford

Todd Grantham, who was one of the top candidates for Alabama's defensive coordinator job and interviewed with Nick Saban, is joining the Saints as a defensive assistant, sources told ESPN on Friday.
TUSCALOOSA, AL・2 DAYS AGO
ESPN

Our ESPN Betting Analysts offer their best advice on the most popular receiving prop bets to consider for Super Bowl LVII.
1 DAY AGO
ESPN

Panthers reach deal with Ejiro Evero to be new DC

The Carolina Panthers have agreed to terms with Ejiro Evero to make him the team's defensive coordinator.
CHARLOTTE, NC・2 HOURS AGO
ESPN

The traditions of the Pro Bowl haven't changed because there's a different format as young players interact with legends and veterans have fun with youthful teammates.
HAWAII STATE・1 DAY AGO
ESPN

Sources: Ejiro Evero out as Broncos' DC amid outside interest

The Broncos have agreed to let defensive coordinator Ejiro Evero out of his contract to pursue other jobs, sources told ESPN.
DENVER, CO・8 HOURS AGO
ESPN

Baylor's Jonathan Tchamwa Tchatchoua returned to the basketball court during the Bears' 89-62 win over Texas Tech on Saturday, his first action since suffering a knee injury nearly a year ago.
WACO, TX・1 DAY AGO
ESPN

Jim Boeheim told ESPN that he will "probably" return for the 2023-24 season, but feels like he has autonomy over the decision on his future, saying, "I know it's my choice."
SYRACUSE, NY・21 HOURS AGO