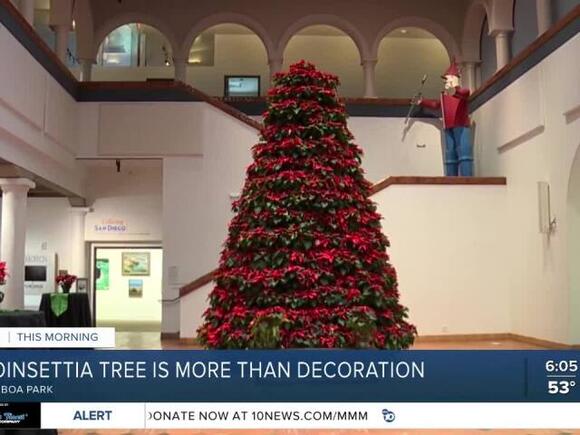 The "tree" contains 382 of the iconic red and green holiday decorations, all from the Weidners Garden in Encinitas. Thomas says it's been an instant hit.

"You can relate it to a child, maybe seeing snowfall for the first time," she says of the looks that people have when they first see the tree. "When (people) come in, they see the height of this tree and instantly they assemble the family for a family portrait."

In addition to being a great spot for a photo or selfie, the tree helps teach a unique part of San Diego's past.

Thomas says the indoor, potted version of the poinsettia that is most prevalent during the holidays was invented in San Diego.

"In 1825, the first poinsettia plant was introduced by the first U.S. Ambassador to Mexico, Joel Roberts Poinset," she explains. "Then in the early 1900s, The Ecke family then began hybridizing the plant and had the innovation to turn it into a house plant."

A picture by the tree shows the Ecke family and explains the connection. After the innovation, the plant's popularity grew. At one point in the 1900s, San Diego supplied more than 90% of all the poinsettia plants used in the US.

That number has since shrunk as the plant is grown in more places now. But Thomas says it's still a point of civic pride every holiday.

She hopes the tree entices a few more people to learn the history of the plant in San Diego. It's part of the Center's mission of "preserving, revealing, and promoting" the region's past.

The tree will be up throughout the month of December. Thomas says it takes hours to water it, and they have to use an electronic lift to reach some of the plants near the top. But it's worth it for the joy it brings to the community.

If you want to see the tree, during December Nights, the San Diego History Center will have extended hours, from 5 p.m.-9 p.m. on Friday and Saturday. They're also open on Sunday from 11 a.m.- 6 p.m.

Marc Glazer says he noticed a sinkhole near his property line in June of 2021. Despite repeated requests, he says the City of San Diego has not made progress towards fixing the problem.
SAN DIEGO, CA・12 HOURS AGO
ABC 10 News KGTV

Just in time for Valentine’s Day, OpenTable released its list of their 100 Most Romantic Restaurants in America for 2023 -- and three San Diego eateries are getting tons of love from reviewers.
SAN DIEGO, CA・17 HOURS AGO
ABC 10 News KGTV

San Diegans desperate to learn fate of loved ones after Turkey, Syria earthquake

While a survivor with ties to San Diego recounted the devastating earthquake in Syria, some San Diegans are desperately trying to find out the fate of loved ones in Turkey and Syria.
SAN DIEGO, CA・13 HOURS AGO
ABC 10 News KGTV

A driver suffered a medical emergency, which caused his car to go off the Otay Mesa (905) Freeway in San Diego Saturday evening.
SAN DIEGO, CA・1 DAY AGO
ABC 10 News KGTV

Biden's visit is part of a California trip in support of the administration's efforts regarding cancer treatment and initiatives for military and veteran families.
SAN DIEGO, CA・3 DAYS AGO
ABC 10 News KGTV

A female passenger was ejected and killed, and the driver was arrested in a single-vehicle crash on a downtown San Diego street early Monday morning.
SAN DIEGO, CA・23 HOURS AGO
ABC 10 News KGTV

Residents say they didn't receive any notice before a series of loud 'bangs' and military helicopters that landed near Liberty Station.
SAN DIEGO, CA・5 DAYS AGO
ABC 10 News KGTV

After her high school friend died unexpectedly in August, Randi Wittak made dozens of bears from her friend's clothing.
BONITA, CA・1 DAY AGO
ABC 10 News KGTV

A trolley struck and killed a pedestrian Friday in a commercial area near San Diego International Airport.
SAN DIEGO, CA・3 DAYS AGO