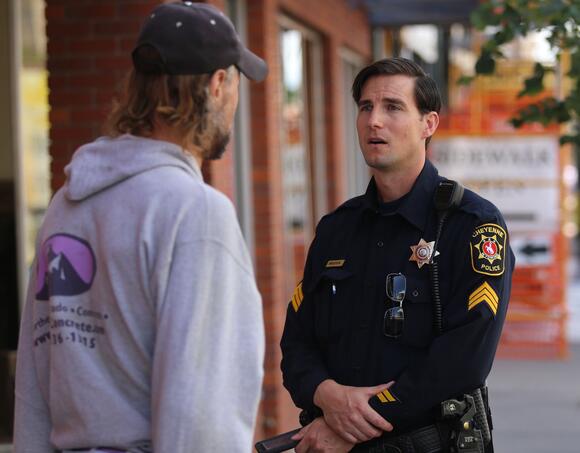 A new behavioral health co-response program will be a collaboration between Cheyenne Regional Medical Center, the Cheyenne Police Department and the Laramie County Sheriff’s Office. CRMC will provide one full-time and one part-time behavioral health clinician for the program. These mental health professionals will be paired with officers and deputies who opt into the program and receive special training.

“It’s really just acknowledging that the way our system currently exists, especially for behavioral health needs – whether that be mental health, substance use or both – isn’t ideal, both in terms of prevention (and) intervention, and treatment and recovery on the other side of that,” said Brittany Wardle, CRMC’s Community Prevention project director.

Grant money to fund the program for a year has already been approved by the Laramie County Board of Commissioners, county grants manager Sandra Newland told the Wyoming Tribune Eagle this week. The $344,650 grant, made possible by federal pass-through funding, was awarded by the Wyoming Department of Health.

A memorandum of understanding , or MOU, between the hospital, CPD, LCSO, Laramie County government and University of Wyoming’s Dr. Clair White was sent to the City Council’s Finance Committee on Monday. Before it’s approved, it will be reviewed by committees and the larger council several more times.

UW’s White is involved to evaluate the program and its outcomes. Wardle said White has been closely involved with the development of Laramie County’s program.

Once the city approves the MOU, it will go before the county board, Newland said.

A business associate agreement between the entities, which would allow them to share HIPAA information, was also referred to the city’s Finance Committee on Monday.

Mental health-related calls are “among the most complex and time-consuming calls for law enforcement,” a memo attached to the MOU says.

“This collaboration will allow officers to be safer, reduce repeat calls for service, minimize the strain on agency resources, and connect individuals to appropriate services. The outcomes of this proposal will include improved safety, increased access to behavioral health care, decreased repeat encounters with the criminal justice system, reduced costs, and improved community relations,” it continues.

Wardle said program organizers have been seeking funding for this type of program for a while, “just to see what other options exist out there for us to be innovative in terms of how we use the system that’s currently in place,” including 911 and law enforcement dispatch.

She said she hopes the program will be up and running early next year – possibly in January or February.

CPD’s Lt. Joel Hickerson pointed out that Wyoming continues to lead the U.S. in suicide rates, while lacking enough behavioral health resources to adequately address the problem. But communities all over the country – Cheyenne and Laramie County included – have seen an increase in mental health calls and suicides since the beginning of the COVID-19 pandemic, he said.

“With COVID, people were told to stay inside, they were told to make sure to distance themselves. And because of COVID, and because of so much less access to the service they were in need of, those issues with mental health crises and officer contacts increased,” Hickerson said.

Wardle said the aim of the co-response program is to “do something differently in a way that’s beneficial not only to the members of our community, but also to law enforcement and the behavioral health staff.”

“It puts everyone, hopefully, in a better place with the right skills and training to be able to respond to this in a way that is much safer for those that are being served by the program, and also safer for the folks that are responding,” she said.

Communities across the U.S. have implemented collaborations between law enforcement and behavioral health professionals in recent years, but Laramie County’s program was most directly influenced by Fort Collins Police Services. Meeting with them has helped those involved in forming Laramie County’s program learn what has and hasn’t worked in Fort Collins, Wardle said.

Law enforcement agencies, like many industries, haven’t had an easy time hiring recently. Instead, the program will offer overtime pay to police officers and deputies who sign up for co-responder shifts.

Hickerson said the department has “never had a lack of officers who are willing to step forward and volunteer,” especially when something is important to them and when they’re being compensated for their time.

“No officer’s going to be mandated to do this – we want officers who are feeling driven and inspired or optimistic about what this program can provide,” he said.

Still, finding officers to fill overtime shifts may also be challenge. When a behavioral health clinician isn’t paired with an officer or deputy for a shift, the plan is for that person to work with dispatch to help triage mental health-related calls.

Hickerson added that officers on co-responder shifts who aren’t out on a call will be expected to conduct follow-ups with people who’ve interacted with the program.

Because the situations law enforcement responds to can change or escalate quickly, any call has the potential to become a mental health-related situation, Wardle said. But some situations, such as welfare checks, are more likely to require some sort of mental health response.

Behavioral health clinicians have “different de-escalation skills, especially as it relates to folks that might be having an acute crisis,” she said. After helping to de-escalate a situation where a person may be having mental health or substance issues, the clinician can also help provide referrals and try to get the person help.

Wardle said two officers are often dispatched to mental health situations, so being able to send one officer and a behavioral health professional to some of these calls will likely free up other officers’ time.

It’s unclear how long Laramie County’s co-responder program will last. The funding technically must be spent by May, but because of the timing of the grant award, Wardle said organizers will request a no-cost extension to give them more time to implement the project. The funding will likely last a year.

Although its future is uncertain, Hickerson said he’s “excited” by the prospect of turning the effort into a long-term program.

“Instead of us being reactive and saying ‘It’s a real shame,’ it’s allowing us to do something we’ve never done before, which is provide help on the front end, instead of waiting for things to get to that crisis level,” he said. “If we can find ongoing funding for this, I think it may be something that really, really becomes something that is embraced by other agencies in Wyoming, which I would really like to see.”