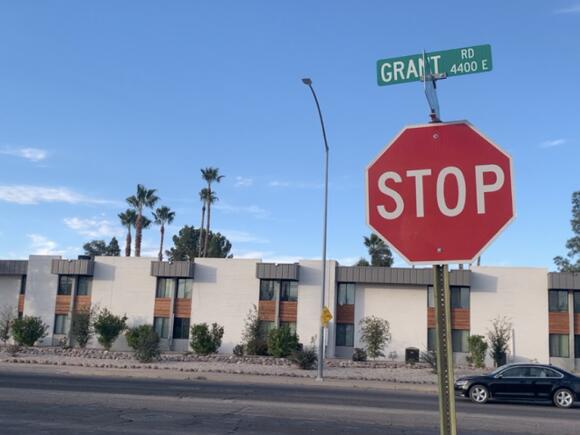 For many of the businesses and neighbors on Grant Road, they're all saying the same thing — they're concerned.

The Eegees on Grant recently closed, but it's not the only local business that has recently closed down. But for businesses like Tucson Stained Glass, the owner Estelle Flores said there's no other place she'd rather run her business.

"I can't imagine doing anything else but i don't want people to be afraid," she said. "If you have a map and throw a dart on it, we are dead center...40 mins from Green Valley, 40 mins from Oro Valley."

When she opened her shop 17 years ago, she said the area was different.

"We had a screen door on the other side of the shop," she said. "We would leave the back door open to have this nice breeze."

Now, she said things aren't like that anymore. Most recently, a man walked into her shop demanding money.

"Usually I'm here by myself and I've just been getting awful things coming through the front door," she said.

So she's installed a new security system on the front door.

"I don't want to be paranoid every time I come into my shop either," she said. "And I'm constantly looking around. Every thing is wired with alarms."

Flores said she's also frustrated with the quality of the road.

"We had a customer that lost a tire as she pulled into here," she said. "And it's just that bad."

One of the neighbors Ronni Kotwica, who has lived in the neighborhood for years, said the area was supposed to be improved a long time ago.

"The Grant Road project was supposed to be done a long time ago and they haven't even started," she said. "What is happening is that our quality of life is being attacked."

She said increased police presence would help with the burglary and theft issues.

"Now as Councilman Steve Kozachik has said, we need to prosecute," she said.

——-
Tina Giuliano is a reporter for KGUN 9 . She is a native Arizonan and grew up in Scottsdale. Tina is passionate about storytelling and is excited to work telling Tucson's stories. Share your story ideas and important issues with Tina by emailing tina.giuliano@kgun9.com or by connecting on Facebook , Instagram , and Twitter .

According to The Arizona Department of Transportation Interstate 10 and the frontage roads will be restricted in both directions between Ina and Ruthrauff.
TUCSON, AZ・20 HOURS AGO
KGUN 9 Tucson News

The Aphasia Center of Tucson was broken into over the weekend, with several items stolen including laptops.
TUCSON, AZ・23 HOURS AGO
KGUN 9 Tucson News

On February 4, 2023, around 9:45 a.m. the Oro Valley Police Department responded to reports of a suspicious package at the Home Depot in Oro Valley.
ORO VALLEY, AZ・1 DAY AGO
KGUN 9 Tucson News

SPEAK protested the 5 horses that died last racing season. A spokesperson for the Rillito Park Racetrack said they are using new technology to measure the health of their horses.
RILLITO, AZ・17 HOURS AGO
KGUN 9 Tucson News

Pima County was identified as one of the country’s areas with the highest traffic deaths, so it was given a grant to ensure safety.
PIMA COUNTY, AZ・3 DAYS AGO
KGUN 9 Tucson News

AAA's 'Favorite Romantic Restaurants in the West' list includes a number of reader-submitted favorites, and El Corral—known for its prime rib—made the cut.
TUCSON, AZ・3 DAYS AGO
KGUN 9 Tucson News

Neighbors who live along Mary Ann Clevelend way are asking for change after a teen girl was hit and killed by a car.
TUCSON, AZ・2 DAYS AGO
KGUN 9 Tucson News

How Tucson banks water for the future

Water is a valuable resource in the desert so the City of Tucson keeps a lot of its water in a bank.
TUCSON, AZ・4 DAYS AGO
KGUN 9 Tucson News

On Friday, February 3, 2023, around 7 p.m. the Tucson Police Department responded to a crash involving a female pedestrian and a gray 1996 Honda Accord near W. Miracle Mile and N. El Burrito Avenue.
TUCSON, AZ・18 HOURS AGO
KGUN 9 Tucson News

'Bag It' helps cancer patients navigate the road to recovery

Bag it helps those diagnosed with cancer navigate through a very difficult time. It's a Tucson nonprofit with a footprint at the state and national levels.
TUCSON, AZ・3 DAYS AGO
KGUN 9 Tucson News

With 'Source of Income' ordinance on hold, AG Mayes resolves Tucson of violation

Josue Lopez Quintana, the man who provided a key component to a gun used in a Tucson shooting last year has been sentenced to three years probation, following his guilty plea.
TUCSON, AZ・1 DAY AGO
KGUN 9 Tucson News

One dead three hospitalized after shooting

The Tucson Police Department is investigating a shooting that happened around 3 a.m. on February 5, 2023, near the 4000 block of East Agate Knoll Drive.
TUCSON, AZ・2 HOURS AGO
KGUN 9 Tucson News

Ty Wells, a former University of Arizona student athlete and member of the Arizona Swimming & Diving program from 2018 to 2022, passed away Friday, Jan. 27. He was 23 years old.
TUCSON, AZ・1 DAY AGO
KGUN 9 Tucson News

Seven states, including Arizona, were given a deadline by the federal government to come up with a plan on how to cutback on water.
ARIZONA STATE・4 DAYS AGO
KGUN 9 Tucson News