Edwin Diaz was the biggest piece to the bullpen puzzle that Mets general manager Billy Eppler needs to solve this offseason.

And in a Zoom press conference on Thursday, Diaz, speaking publicly for the first time since signing the most lucrative contract for a relief pitcher, $102 million for five years, the closer said he had faith the Mets would find a way to build another solid relief corps.

“I’m back and I know all the free agents, but Billy will do his best to get a great bullpen, like we had last season,’’ Diaz said. “I can’t wait to see what they do.”

Eppler wouldn’t divulge many details about the Mets’ plans for filling out the pen, but both sides made it clear they weren’t surprised a deal to keep Diaz in Queens came together quickly.

“For me and my family, the number one priority was to stay in New York because we love the city of New York, the team and the organization,’’ Diaz said. “Setting a record with that deal, I feel happy to help other guys. It keeps pushing the value of relievers up.”

Diaz made his desire to stick around known to Eppler and owner Steve Cohen during conversations that took place during the World Series. 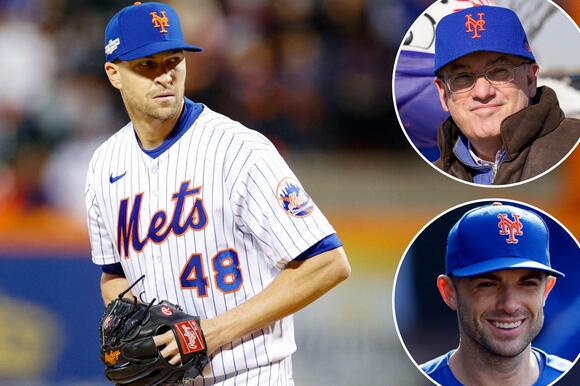 “We reached a deal really quickly because they knew what we wanted and we were pleased with it,’’ said Diaz, who was as dominant as any reliever in the game a year ago, with 118 strikeouts and a WHIP of 0.84.

It was Diaz’s best season since 2018, when he had 57 saves for the Mariners. That preceded the trade four years ago that brought the right-hander and Robinson Cano to the Mets in exchange for a package led by Jarred Kelenic.

“When we think about building teams that can really compete, having that type of elite talent and competitiveness he possesses for games’ most important moments, is critical,’’ Eppler said.

Now, the 28-year-old will be tasked with trying to match his success of last season in a pen that currently has plenty of holes. Joely Rodriguez has signed with the Red Sox and setup men Seth Lugo, Adam Ottavino, Trevor May, Tommy Hunter and Trevor Williams are free agents.

While the Mets have not yet announced their recent coaching changes , Eppler said other teams had been looking to hire Jeremy Barnes to be their top hitting coach.

That forced the Mets to bump Eric Chavez, the hitting coach last season, to bench coach and promote Barnes from assistant hitting coach to the top spot.

The moves came as a result of talks with Showalter, as well as the 2022 bench coach, Glenn Sherlock, who will now coach the Mets’ catchers.

Eppler credited Sherlock for his willingness to take a lesser role, which allowed the Mets to “keep our talent,” Eppler said.

Spring training is about to begin, so the Yankees need to brace for Josh Donaldson and Aaron Hicks being blamed for everything from a failure to get to the World Series to an inability to solve world hunger. When general manager Brian Cashman has proclaimed Donaldson the starting third baseman and Hicks the frontrunner in left field, it resonates with the fan base as if he is championing Jacoby Ellsbury and Carl Pavano for Monument Park. Mainly due to their big salaries and small production, Donaldson and Hicks currently are enemies No. 1 and No. 1A of the Pinstripe State. I would argue...
BOSTON, NY・2 DAYS AGO
New York Post

Greg Joyce discusses the Yankees’ hiring Brad Wilkerson as an assistant hitting coach and which Bombers’ prospects may be ready to make an impact in The Bronx in 2023.
BRONX, NY・1 HOUR AGO
New York Post

With spring training two weeks away, the Yankees have finally completed their coaching staff. They did so by naming Brad Wilkerson their assistant hitting coach on Monday, filling the spot that opened up when Hensley Meulens left to become the Rockies’ hitting coach. Wilkerson, 45, brings eight seasons of MLB experience to the staff. He will team up with hitting coach Dillon Lawson and assistant hitting coach Casey Dykes. A former outfielder who played for the Expos/Nationals, Rangers, Mariners and Blue Jays, Wilkerson spent the past three years as an assistant coach and recruiting coordinator for Jacksonville University. The rest of the Yankees’ coaching staff from 2022 is set to return this season. Pitchers and catchers report to Tampa by Feb. 16.
3 HOURS AGO
New York Post

YES Network is working toward offering its service direct-to-consumer by Yankees Opening Day at the end of March, The Post has learned. Here’s what you need to know: 1. While the aim is to be up and running by the time the Yankees face the Giants on March 30, YES won’t press go unless everything is lined up, so the start date could be moved. In late July, Yankees president and YES chairman Randy Levine said on WFAN’s “Carton & Roberts” that YES would have a DTC product “very soon.” 2. While a DTC offering would allow viewers to bypass cable and satellite...
10 HOURS AGO