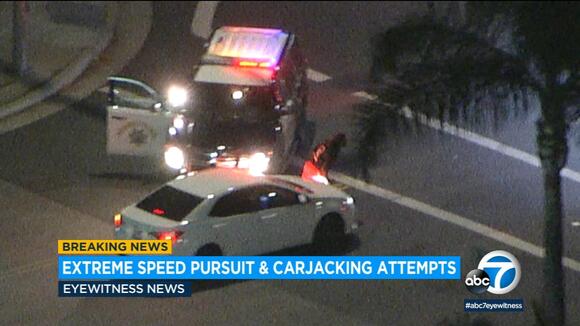 A man led authorities on a high-speed chase through Los Angeles County before he apparently tried to carjack passing drivers in a desperate attempt to escape capture Thursday night. After jumping out of his car near Archibald Avenue and Oak Hill Drive in Ontario, the suspect looked for nearby motorists and tried to carjack three cars on the road - even as the drivers sped off. California Highway Patrol officers swarmed the man after his failed carjacking attempts and tackled him to the ground to make the arrest. AIR7 HD was over the chase around 10 p.m. WATCH: Chase ends with suspect trying to carjack motorists

A suspect led police on a dangerous, high-speed chase from Los Angeles to Ontario and then tried to carjack passing motorists before he was tackled by officers.

While on the freeway, the suspect drove at speeds that exceeded 100 mph. It started near downtown L.A., and transitioned onto the 60 Freeway through the San Gabriel Valley before it ended in Ontario. Moments later, AIR7 HD was over another chase in Pomona that eventually ended on the 71 Freeway in Chino Hills. The fleeing driver in that pursuit exited the car with a female passenger and both were taken into custody. Firefighters arrived at the scene to extinguish flames after the suspect's car suddenly caught fire.

AIR7 HD was over a chase in Pomona that eventually ended on the 71 Freeway in Chino Hills.

these people have caused more damage in past 2 years daily basis than good?????how is that a normal way of life.....the truth needs to come outLET ME SAY THAT AGAIN SINCE 2020 MORE DAMAGE FINANCIALY AND PHYSICALLY TO AMERICAN PEOPLE THAN GOOD....??????HIW CAN THIS BE A NORMAL WAY OF LIFE

Child rescued by police after carjacking in the San Fernando Valley

Los Angeles police rescued a child who was in a vehicle that was carjacked in the San Fernando Valley Tuesday afternoon.
LOS ANGELES, CA・11 HOURS AGO
ABC7

Chase suspect loses control of car on 405 Fwy, attempts to carjack truck before tackled by officers

A chase involving a possible murder suspect ended after the driver lost control of the car on the 405 Freeway, then tried carjacking a truck.
LOS ANGELES, CA・1 DAY AGO
ABC7

4 people, including LAPD officer, taken to hospital after multi-vehicle crash in Westlake District

Four people were transported to a hospital after a multi-vehicle crash involving an LAPD cruiser at an intersection in the Westlake District, authorities said.
LOS ANGELES, CA・1 HOUR AGO
ABC7

Suspect injured after being shot by LAPD in Van Nuys

A bicyclist in his 40s who police said they saw with a firearm as they attempted to detain him was shot by Los Angeles Police Department officers Tuesday in Van Nuys.
LOS ANGELES, CA・11 HOURS AGO
ABC7

Torrance police arrested a man for allegedly trying to strip copper from the rooftop of a business. Police credit their drone for spotting the suspect after the alleged theft.
TORRANCE, CA・1 DAY AGO
ABC7

Riverside County sheriff's deputies shot and killed a 33-year-old man diagnosed with schizophrenia after they say he came toward them with a spike-tipped baseball bat.
MORENO VALLEY, CA・1 DAY AGO
ABC7

Three people were killed and another hospitalized after a crash involving a driver who was fleeing from police, authorities said.
LYNWOOD, CA・2 DAYS AGO
ABC7

Police arrested a Las Vegas man for allegedly holding a pregnant woman at gunpoint and stealing her two French bulldogs in Studio City. LAPD said they used information from a dating website to find him.
LOS ANGELES, CA・1 DAY AGO
ABC7

More businesses have been targets of burglaries in Long Beach. Police are looking into whether they're related to last week's string of burglaries.
LONG BEACH, CA・1 DAY AGO
ABC7

Authorities are looking for a Beaumont man who allegedly doused his partner in lighter fluid and set her on fire.
BEAUMONT, CA・1 DAY AGO
ABC7

A woman is fighting for her life after she was seriously injured during a deadly crash in Westminster caused by a wrong-way driver, police said.
WESTMINSTER, CA・10 HOURS AGO
ABC7

South LA mom beaten, stabbed to death by boyfriend in front of her children, family says

A family in South Los Angeles is grieving and searching for answers after a mother was stabbed to death by her boyfriend in front of her children.
LOS ANGELES, CA・16 HOURS AGO
ABC7

A homeowner was shot at while confronting thieves near Victorville, and the terrifying moments were caught on video.
VICTORVILLE, CA・4 DAYS AGO
ABC7

Sayvee is with her parents, Breanna Torres and Oscar Morales, who are concealing the baby and their whereabouts, according to the sheriff's department.
LA PUENTE, CA・1 DAY AGO
ABC7

A 3-year-old boy has been found and his non-custodial mother arrested after she allegedly abducted him, prompting a search, Riverside police said.
RIVERSIDE, CA・3 DAYS AGO
ABC7

"They need to be in jail because they was not supposed to kill my husband." Takar Smith's widow is calling for justice in the fatal LAPD shooting.
LOS ANGELES, CA・2 DAYS AGO
ABC7

Officials searching for inmate who walked away from LA reentry program