‘I was just trying to scare him in self-defense,’ Las Vegas man accused of shooting father in neck after school fight 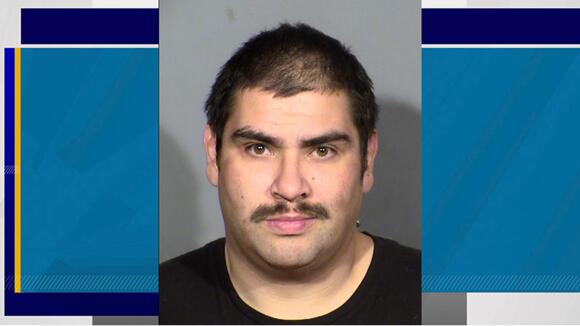 LAS VEGAS (KLAS) — A man is facing an attempted murder charge after he allegedly shot a man in the neck in the middle of traffic following a fight at a Las Vegas middle school, police said.

Las Vegas Metro police arrested Rene Burgos, 33, on Wednesday on charges of attempted murder with the use of a deadly weapon and possession of a gun by a prohibited person.

On Nov. 18 just before 3:20 p.m., Metro police were notified of a large fight involving students in the area of Hyde Park Middle School, an arrest report said. Shortly after, police received a report of a shooting in the middle of traffic on Valley View Boulevard north of Charleston Boulevard; less than half a mile from the reported fight.

A preliminary investigation showed that a red sedan with pink stickers on the rear window shot a Hispanic male in the neck who had approached the vehicle on foot, the report said.

The man who was shot was later identified as Miguel Salas who was taken to UMC Trauma by his son before officers arrived.

Detectives learned that three teenagers were involved in the fight at Hyde Middle School with the Salas’ daughter and her friends, police said.

In an interview with police, the victim’s daughter said that she and her friends were engaged in a fight at the school because of an “outstanding street beef,” the arrest report said. The daughter said that she was screaming at the boys to stop fighting when she then started to get pushed and punched as well.

After the fight, the boys were seen leaving in a red four-door sedan. Salas’s daughter called him to tell him the situation and then began to walk home with one of her friends, police said.

As they were walking home, Salas and his son picked them up and he told them that they were going to drive around in an attempt to find the red sedan, police said.

Salas was able to find the sedan stuck in traffic on Valley View Boulevard. Salas got out of the car and walked up to the sedan confronting the boys and telling them to get out of the car, the report said.

According to the arrest report, Salas said that the person in the far-right-rear passenger seat took out a semi-automatic handgun and shot him. The woman driving the red sedan screamed and drove off “recklessly,” the report said.

The woman driving the sedan was identified as one of the boys’ grandmothers. In an interview with police, she said that she was asked to drop the boys off in the area of Hyde Park Middle School, park, and wait for them on a side street.

The grandmother initially told police that she following their instructions and did believe they may have been there for a fight which she confirmed later with the boys.

After the fight, she said all three boys sat in the back seat of the sedan, and then she left the area. According to the arrest report, she then went on to tell police that while stuck in traffic she saw an adult male approach her car and challenge the boys to fight him.

She then heard two gunshots which she thought were intended for her. She drove off frantically and dropped the boys off at their apartment complex, the report said.

In a second interview, the grandmother told police that she previously omitted that two additional people were in her vehicle at the time of the shooting, one being her son Ryan Arcangel and the other Burgos.

She told police that after dropping the boys off at the school she actually left and picked up her son and Burgos from a nearby gas station and then returned to the school, the report said.

According to the report, Burgos was wearing a black hoodie and a black mask at the time of the shooting. One of the boys in the car told police that Burgos pulled out a gun when Salas approached the car and shot at him two times hitting him once in the neck.

According to the arrest report, Burgos initially requested a lawyer to be present during his interview, but later told police, “you wouldn’t shoot someone if they walked up on your car and tried to open the door?”

The detective responded and said, “if the person wasn’t presenting a weapon, I wouldn’t.” Burgos then said, “I wasn’t trying to hit him, I was just trying to scare him in self-defense.”

Burgos is scheduled to appear in court on Tuesday at 7:30 a.m. and is being held without bail.

I don't understand how they keep referring to a 33 year old man as a boy? He's a man and should be charged with attempted murder and his claim of self-defense should be ignored since he was safely tucked in the car and not in danger of mortal harm.

first of all the father had a lot of time to go look for trouble he should have just called the authorities and told them the situation about his daughter being assaulted instead of walking up on a car and challenging people to fight.

Where were the school security people during the "school fight"? Why weren't the police called before the school "beef" escalated to the extent that it did? This is the kind of behavior in schools that the public hears about, often leading to serious injury and even death. Thought Clark County School District was putting security measures into place on school grounds to deal with this kind of behavior?

LAS VEGAS (KLAS) — A Las Vegas woman allegedly struck and killed a pedestrian before driving away, trying to clean evidence off of the vehicle, and speeding back through the crash scene, according to an arrest report. Joanna Meza, 19, is facing charges of reckless driving, failing to stop at the scene of an accident, […]
LAS VEGAS, NV・5 HOURS AGO
8 News Now

A man convicted for his part in a mass shooting at a Las Vegas hookah lounge could serve a little more than a year in prison as police continue to search for other shooters involved.
LAS VEGAS, NV・1 DAY AGO
8 News Now

A man accused of threatening to shoot a woman he allegedly held against her will later struggled with police officers over his gun inside a laundromat, documents said.
NORTH LAS VEGAS, NV・1 DAY AGO
8 News Now

Survivor, family members who died in horrific North Las Vegas crash to be honored this weekend

A family who lost seven members, including four children in a North Las Vegas crash a year ago will be honored in a special tree dedication ceremony at Craig Ranch Park as will a victim of the crash who suffered serious injuries, and survived.
NORTH LAS VEGAS, NV・9 HOURS AGO
8 News Now

A woman was arrested after stealing an RTC bus and using it to back into a Las Vegas police officer's motorcycle, an arrest report said.
LAS VEGAS, NV・4 HOURS AGO
8 News Now

LAS VEGAS (KLAS) — Las Vegas police are searching for a suspect accused in a business robbery on New Year’s Day. Police said it happened after the suspect entered a business near the 3800 block of East Sunset Road and pulled a gun out and demanded money from the cash register. The suspect is described […]
LAS VEGAS, NV・1 DAY AGO
8 News Now

UPDATE: At around 9:45 p.m. on Tuesday, Metro police said they had taken a suspect into custody following a barricade incident in the east valley. LAS VEGAS (KLAS) — Las Vegas police investigated a barricade situation in the east valley on Tuesday evening. It took place near Mesa Vista Avenue and Mountain Vista Street just […]
LAS VEGAS, NV・1 DAY AGO
8 News Now

LAS VEGAS (KLAS) — A man was sentenced to six years in prison with the possibility of parole after two years for hitting and killing a teenager in front of his Henderson middle school while driving almost 100 mph. There were nearly 200 people in the courthouse to support Rex Patchett, including his family and […]
HENDERSON, NV・1 DAY AGO
8 News Now

Police said a man driving a vehicle was shot twice and then crashed into a wall near the intersection. According to police, the man's injuries appeared to be non-life-threatening.
LAS VEGAS, NV・14 HOURS AGO
8 News Now

LAS VEGAS (KLAS) — A dispute between neighbors resulted in a shooting Tuesday afternoon, according to Las Vegas police. The neighbor dispute was reported at 1:36 p.m. Tuesday in the 900 block of Doolittle Avenue, near H Street. When officers were arriving, they heard multiple gunshots, police said. Three adults were hit and taken to […]
LAS VEGAS, NV・2 DAYS AGO
8 News Now

LAS VEGAS (KLAS) — An alert passenger could help prevent roadway fatalities. An important message during National Passenger Safety Week, which takes place from January 22nd through January 29th.  Tina Lavoie spoke to 8 News Now about her daughter Hillary, who was riding in the passenger’s seat when her friend lost control of the vehicle causing […]
NORTH LAS VEGAS, NV・1 DAY AGO
8 News Now

LAS VEGAS (KLAS) — A non-profit organization is giving back to the daughter of a Las Vegas Metropolitan police officer killed in the line of duty. On Tuesday, Smoking Shields, donated funds to Jada Thai, the daughter of Metro officer Troung Thai who was killed on Oct. 13, 2022, while responding to a domestic disturbance […]
LAS VEGAS, NV・1 DAY AGO
8 News Now

A man who previously pleaded guilty to abusing and murdering his son refused to show up in court for his sentencing on Thursday morning.
LAS VEGAS, NV・8 HOURS AGO
8 News Now

A 35-year-old man is dead after he was struck Tuesday night by a truck driven by an off-duty Las Vegas Metropolitan Police Department employee. Martin Luther King and Balzar.
LAS VEGAS, NV・1 DAY AGO
8 News Now

Shay Mikalonis, the Metro police officer who was paralyzed in a shooting on the Strip two and a half years ago, returned to visit officers at the Convention Center Area Command on Tuesday.
LAS VEGAS, NV・2 DAYS AGO