Oregon pulls away to beat Washington State in Pac-12 opener 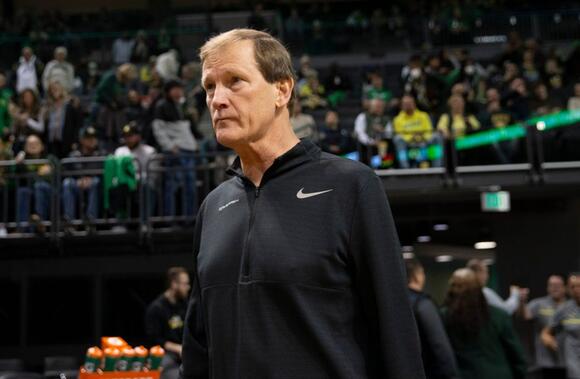 N’Faly Dante matched his career high with 22 points and Will Richardson added 17 as host Oregon drew clear in the second half for a 74-60 win over Washington State in the Pac-12 opener for both teams in Eugene on Thursday.

Quincy Guerrier scored 12 points and Rivaldo Soares had eight points and seven assists for Oregon (4-4), which outscored the Cougars 42-28 in the second half.

Mouhamed Gueye scored a season-high 19 points to lead Washington State (3-3), while TJ Bamba had 14. The Cougars shot 3 of 14 (21.4 percent) from 3-point range after entering play averaging 11.2 made 3-pointers per game.

Oregon broke open a close game and established control midway through the second half. Dante’s dunk capped a 10-2 run and put the Ducks ahead 55-48 lead with 9:21 remaining.

Dante, who battled early foul trouble before scoring 16 points in the second half, dunked again with 3:59 left to give the Ducks a commanding 68-54 lead.

Washington State committed a season-high 17 turnovers and recorded just five assists without second-leading scorer Jabe Mullins, who sat out with a knee injury.

Oregon won despite shooting 3 of 18 (16.7 percent) from 3-point range. The Ducks shot 51.6 percent from the field, and have won two straight following a three-game losing streak.

Neither team was able to gain separation in the first half, which ended in a 32-32 tie. Gueye scored 17 points to lead all scorers.

Washington State shot just 2 of 8 (25 percent) from beyond the arc in the first half after making a school-record 19 3-pointers in a 96-54 rout of Detroit Mercy last Friday.

Richardson scored nine points before intermission for Oregon, which shot 53.8 percent for the half, including 1 of 5 from 3-point range.

Oregon guard Brennan Rigsby, who missed the team’s first seven games due to a high ankle sprain, made his Ducks debut and had two points and six rebounds in 23 minutes.

No. 6 Arizona gets even with Washington State

Azuolas Tubelis posted his sixth double-double in the past seven games, and No. 6 Arizona avenged a home loss to
TUCSON, AZ・22 HOURS AGO
Sportsnaut

Coming off a 75-69 win over Colorado at home Thursday night, Oregon will be out for its first weekend sweep
SALT LAKE CITY, UT・3 HOURS AGO
Sportsnaut

Three weeks removed from a weekend that seemed to portend better things ahead, Arizona State and host Washington State will
PULLMAN, WA・3 HOURS AGO
Sportsnaut

Colorado aims for a season sweep of Oregon State when the teams continue Pac-12 play on Saturday at Gill Coliseum
BOULDER, CO・2 HOURS AGO
Sportsnaut

Keion Brooks Jr. scored a team-high 22 points and Washington survived a late scare for a 69-66 overtime victory over
SEATTLE, WA・21 HOURS AGO