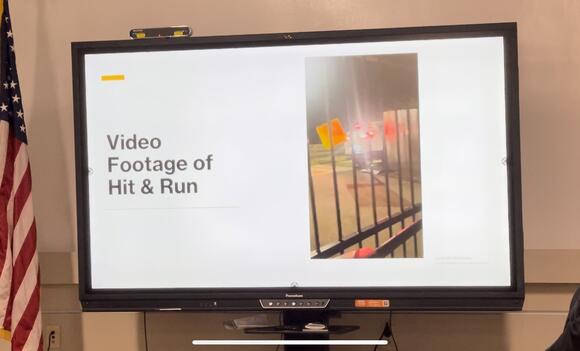 COVINGTON, La ( WGNO ) — The Covington Police Department released new details about a double homicide investigation in which both victims’ bodies were also burned. The St. Tammany Parish Coroner’s Office also released the remaining identity of one of the victims.

During an afternoon news conference on Thursday (Dec. 1) that included St. Tammany Parish President Mike Cooper and Covington Mayor Mark Johnson, the coroner released the identity of the second victim in the case, Ruth Prats, who he also said was beaten to death.

Both victims’ bodies were discovered behind Dependable Glass Works on E. Gibson Street when the business opened Monday morning. Both bodies were burned beyond recognition, but police already had an idea on where to begin their investigation.

During Thursday’s news conference, Lt. Kevin Collins with the Covington Police Department said that the case actually began on Sunday evening (Nov. 27) when someone called and reported a hit and run by the Bogue Falaya Towers building along the Tammany Trace. Someone reported seeing a white Honda that ran into some signs in the area and then left the scene. Police responded to the scene and were given the car’s license plate number by a witness.

When police checked the license plate for the vehicle’s registration information, they found out Prats was the owner. After unsuccessfully locating her, they reached out to family members who also said they were unable to reach her.

Covington police arranged to meet family members of Prats at her home on South Washington Avenue. When they called Prats’ cell phone, it was located in a nearby dumpster.

Then around 3:45 Sunday morning, police located Prats’ car at the Walgreens parking lot on Bus. Hwy 190. Inside the car, police say, was Antonio Tyson and a woman who was not Prats. Police detained both of them. Police later determined the woman had no involvement in the case.

Next, police learned that retired priest Otis Young was with Prats on Sunday and was also missing. Then both of their burned bodies were found behind the Covington glass business.

During the course of their investigation, police found video of Prats’ car during the hit and run incident. Next they found other video clips that showed the suspect, Tyson, riding on a bicycle by Prats’ home, circling back to speak with Young, then riding away.

About 15 minutes later, Tyson returns, according to police, and is seen on video with a knife behind his back while appearing to enter Prats’ home. About an hour later, Prats’ car is seen as its driven to the back of the home, police say Tyson is seen in the video driving Prats’ car away from the house. Police also confirmed to WGNO News that Prats and Young were inside the vehicle.

Police say they also located video that shows Tyson filling a container with fuel at a gas station.

The coroner said that Young’s identity was confirmed by comparing a chest x-ray from his body to another one taken after a previous heart surgery.

“We took the chest x-ray we obtained here, his post-operative chest x-ray, and the sternal wires lined up exactly,” Preston said.

The coroner said his team needed additional time to confirm Prats’ identity which required a DNA sample from one of her daughters. Preston said the in-house DNA lab at the coroner’s office was able to confirm the identity.

Tyson was booked with first degree murder and kidnapping, among other charges.

Officers responded to the 4500 block of Perlita Street where they found a man, 51-year-old Ferdinand Alexander, suffering from a gunshot wound.
NEW ORLEANS, LA・5 HOURS AGO
WGNO

NEW ORLEANS (WGNO) — The St. Bernard Parish Sheriff’s Office is asking for the public’s help to find the parents of a 2-year old boy, after they took the child out of Children’s Hospital in New Orleans, Thursday (Feb 2). The child was being treated for a cocaine overdose, in the Hospital’s Pediatric Intensive Care […]
LOUISIANA STATE・2 HOURS AGO
WGNO

Inmates rebooked on added charges after 2022 deadly shooting of teen

A woman is wanted after the New Orleans Police Department says she opened fire on a fast food employee on Thursday evening.
NEW ORLEANS, LA・13 HOURS AGO
WGNO

One arrested, one wanted in 2022 deadly double shooting investigation

Through investigations, the NOPD was able to identify 29-year-old Brian Plummer as one of two people responsible.
NEW ORLEANS, LA・1 DAY AGO
WGNO

On Thursday (Feb. 2), the NOPD’s Violent Offender Warrant Squad and U.S. Marshals arrested a suspect in connection with a homicide in Central City in December.
CENTRAL, LA・1 DAY AGO
WGNO

The victim was pronounced dead on the scene by EMS while the suspect was taken to the Investigations Bureau for interview.
WESTWEGO, LA・1 DAY AGO
WGNO

According to the NOPD, the incident happened on Nov. 9, 2022, in the Little Woods neighborhood.
NEW ORLEANS, LA・11 HOURS AGO
WGNO

On Tuesday (Jan. 31) 50-year-old Viusqui Perez-Espinosa, was convicted of 2nd degree murder-- for a second time-- in a case that involved the killing of a rival in a Kenner love triangle.
KENNER, LA・1 DAY AGO
WGNO

According to the NOPD, the incident happened early Thursday morning in the 5600 block of Tchoupitoulas Street.
NEW ORLEANS, LA・1 DAY AGO
WGNO

An alleged armed robbery suspect is wanted by the New Orleans Police Department for an incident in the Algiers area.
NEW ORLEANS, LA・2 DAYS AGO
WGNO

A 13-year-old is in custody after St. John Parish detectives say he brought a gun to school this week, causing campus to lock down.
LAPLACE, LA・1 DAY AGO
WGNO

Suspects wanted for questioning in shooting on Chef Hwy

The NOPD is asking for the public’s assistance in locating two male suspects in connection to a shooting incident that occurred Monday (Jan. 30) in New Orleans East.
NEW ORLEANS, LA・2 DAYS AGO
WGNO

At about 1:50 a.m. on March 20, 2022, an accident happened near the corner of North Robertson and Lesseps Streets involving 25-year-old Judah Brophy.
NEW ORLEANS, LA・2 DAYS AGO
WGNO

New Orleans law enforcement is tackling the topic of crime fighting in the city.
NEW ORLEANS, LA・1 DAY AGO
WGNO

NEW ORLEANS (WGNO) — The NOPD is asking for the public’s assistance in locating a male suspect in connection to a auto theft that occurred Sunday (Jan. 15) near the Fairgrounds. According to the NOPD, around 10:40 p.m. a male suspect loaded a 2004 Lexus RX300 onto a truck flatbed in the 1900 block of Gentilly […]
NEW ORLEANS, LA・2 DAYS AGO
WGNO

"That tells me she wasn't just our angel. She was their angel as well."
NEW ORLEANS, LA・5 HOURS AGO
WGNO

The NOPD is asking for the public’s assistance in identifying a suspect wanted in connection to fraud incident Thursday, Feb. 2 at a Gentilly gas station.
NEW ORLEANS, LA・1 DAY AGO
WGNO

Suspect attempts to steal car in Uptown, returns the next day to try again

The NOPD is asking for the public’s assistance in locating a man who may be connected to an attempted carjacking in the Uptown area.
NEW ORLEANS, LA・2 DAYS AGO