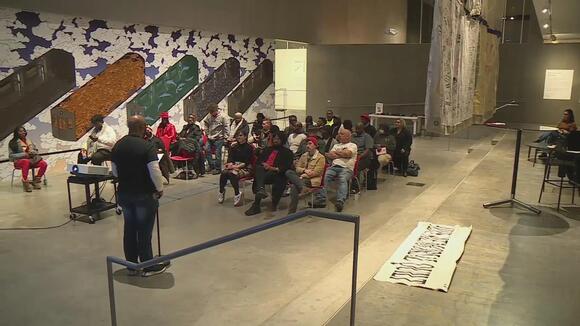 ST. LOUIS – On the 34th annual World AIDS Day, people across St. Louis honored those living with HIV by educating others and spreading awareness.

For many, World AIDS Day is a time to reflect, educate, and empower, especially those who have lost their fight.

“You could be dancing with someone in the club on Friday and by that Wednesday or Friday be carrying their casket to the grave,” said Jordan Braxton, prevention supervisor for Vivent Health.

Those not only living with the disease but thriving have come a long way.

“I honestly could not have imagined 25 years ago that I would have been here 25 years later,” said Lawrence Hudson-Lewis, director of prevention for Washington University’s “Project Ark.”

Several events were held throughout St. Louis on Thursday as part of a day of action to combat AIDS, including a short film at the Contemporary Art Museum on the struggles many faced.

“It’s not a done deal yet. Until there’s a cure, we’re not quite done with it,” Hudson-Lewis said. “So, we do have more stories that are unfolding, different narratives that need to be told because different people are there.”

Nearby, art was once again used as a unifier and catalyst for conversation.

“It definitely is an icebreaker,” said Vanessa Frost, an art exhibit attendee. “It’s very important to give back to your community, and to see young Black artists at work, it’s just all great to see.”

“Knowledge is power, the more you give to them, the more they’ll sit, and they’ll respect it,” said Willie Strayhorn, an art exhibit attendee.

That is why experts say testing is so important.

“Within six months of you getting your diagnosis and taking your medicine, you can be undetectable,” Braxton said. “It’s all about education.”

Even though people with the disease faced stigma and discrimination, advances in medicine and changes in public opinion have led to major breakthroughs.

Even when it is not World AIDS Day, the city gives everyone free at-home testing kits, so they can check for HIV. The kits can be ordered by the community at www.takemehome.org .

According to city officials, since being added in 2021, more than 1,080 at-home test kits have been distributed.

Get ready to give.
SAINT LOUIS, MO・3 HOURS AGO
FOX 2

A $100 million project to revitalize Powell Hall, the home of the St. Louis Symphony Orchestra, is in the works.
SAINT LOUIS, MO・1 HOUR AGO
FOX 2

A growing concern statewide about crime going unpunished in the City of St. Louis has a bi-partisan group of lawmakers calling for the Missouri governor to appoint a special prosecutor for St. Louis.
SAINT LOUIS, MO・17 HOURS AGO
FOX 2

The impact of recreational marijuana in Missouri is going to be addressed Thursday night at a town hall meeting.
FLORISSANT, MO・9 HOURS AGO
FOX 2

The St. Louis Metropolitan Police Department has been under local control for the last decade, but some lawmakers would like to see the agency overseen by the state.
SAINT LOUIS, MO・21 HOURS AGO
FOX 2

Let the good times roll at the 2023 Mayor’s Ball

Get your gown or tux ready because the 2023 Mayor’s Ball promises to be the event of this Mardi Gras season.
SAINT LOUIS, MO・3 HOURS AGO
FOX 2

Dan Isom, who has served as interim public safety director for the city of St. Louis for two years, is stepping down from the role.
SAINT LOUIS, MO・2 DAYS AGO
FOX 2

Chihuly returns to the Missouri Botanical Garden for 2023 exhibition

Dale Chihuly's work will be on display at the Missouri Botanical Garden in a magnificent exhibition that combines art and nature.
SAINT LOUIS, MO・1 DAY AGO
FOX 2

The St. Louis restaurants and chefs up for 2023 James Beard awards

Some local St. Louis residents have made it to the 2023 semifinalist awards today for the James Beard Foundation.
SAINT LOUIS, MO・2 HOURS AGO
FOX 2

Saint Louis University celebrating a major construction milestone on Monday for the new O’Loughlin Family Champions Center. The final beam was raised and put on top of the structure on Monday. Student athletes and members of the construction crew signed the beam before it was raised into position. The new O’Loughlin Center is cset to […]
SAINT LOUIS, MO・2 DAYS AGO
FOX 2

The new St. Louis Police Chief, Robert Tracy, broke what had largely been a public silence during his first two weeks on the job.
SAINT LOUIS, MO・1 DAY AGO
FOX 2

The St. Louis Metropolitan Police Department is working to improve communications with the juvenile court system to prevent the release of suspects deemed dangerous.
SAINT LOUIS, MO・17 HOURS AGO
FOX 2

Earlier this month, a Twitter account titled "TheSpanishFlu" (handle @_fat_ugly_rat_) launched a series of polls for users to select "American cities." St. Louis has made it all the way to the final round of voting.
SAINT LOUIS, MO・2 DAYS AGO
FOX 2

The state of Missouri is in the middle of the United States. It is bordered by Iowa, Illinois, Kentucky, Tennessee, Arkansas, Oklahoma, Kansas, and Nebraska. Kansas City is the state's biggest city, and Jefferson City is its capital.
SAINT LOUIS, MO・1 DAY AGO
FOX 2

The St. Louis Public Schools District says they’re making progress dealing with the shortage of drivers, but they are not out of the woods yet.
SAINT LOUIS, MO・1 DAY AGO
FOX 2

At least one person has requested clemency for Leonard Taylor, a man facing execution next month for the shooting deaths of his girlfriend and her three children in St. Louis County nearly two decades ago.
JENNINGS, MO・4 HOURS AGO
FOX 2

John Mayer announced that he will be performing at the Enterprise Center on Wednesday, March 29, 2023, in St. Louis.
SAINT LOUIS, MO・7 HOURS AGO
FOX 2

It was a once-in-a-lifetime experience for some near the Labadie, Missouri, area who got to see a mountain lion up close.
FRANKLIN COUNTY, MO・1 DAY AGO
FOX 2

People are questioning the speedy demolition of a building in the Central West End the day after a deadly fire.
SAINT LOUIS, MO・2 DAYS AGO