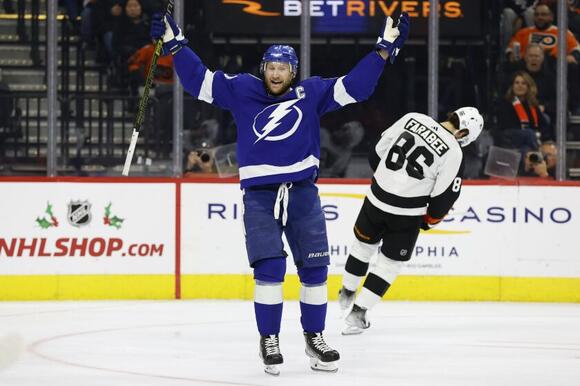 Steven Stamkos never was more elated to get a secondary assist.

Stamkos had an assist for his 1,000th career point, Nick Paul scored twice and the Tampa Bay Lightning beat the Philadelphia Flyers 4-1 on Thursday night.

The No. 1 overall pick in the 2008 draft, Stamkos assisted on Paul’s second goal 7:55 into the second period that made it 2-0. Stamkos started the play with a pass behind the net to Ian Cole, who sent the puck in front to Paul.

“It’s the most I celebrated a second assist in my career,” he said. “I thought I'd make the safe play behind the net, and (Cole) made a great play.”

Stamkos raised both arms in the air when the puck went in, and the entire Lightning team rushed the ice to join in the celebration.

“It means a lot,” Stamkos said. “It’s an individual stat, but so many people have helped me get here. You just reminisce. Just brings back so many amazing memories."

The Tampa Bay captain became the 95th player in NHL history to reach 1,000 points and the second member of the Lightning.

“You can never prepare yourself for that,” he said. “It’s pretty awesome.”

He has played his entire career in Tampa Bay, where he won back-to-back Stanley Cups in 2020 and 2021.

“It’s a proud moment for him and his family,” said Tampa Bay coach Jon Cooper, who has coached Stamkos since March 2013. “One thousand points. Wow, that’s a lot of points. Impressive. Quite a moment for him. I’ve been very fortunate to have a front-row seat.”

It was the 506th career assist for Stamkos, who upped his season totals to 15 assists and 28 points. He also extended his points streak to nine games, with six goals and nine assists over that stretch. The 32-year-old forward set career highs last season in assists (64) and points (106).

Cole had a goal and an assist, Ross Colton also scored, Corey Perry added two assists and Andrei Valilevsky made 21 saves. The Lightning have won seven of nine.

“We couldn’t gather ourselves,” Flyers coach John Tortorella said. “We just never got our feet underneath us.”

Paul scored a power-play goal with 3:58 left in the first to put the Lightning on the board, giving Tampa Bay goals on the man-advantage in nine consecutive contests. It is the longest such streak in the NHL this season and a game shy of the club record.

The Lightning all but put the game away against the Flyers, who entered scoring the fewest goals per game in the league at 2.43 per contest, on Colton’s tally with 3.4 seconds left in the Lightning’s dominating second period in which they outshot Philadelphia 17-2. After a sloppy turnover by Philadelphia rookie defenseman Egor Zemula, Perry was pulled down on a breakaway attempt but Colton pounced on the rebound with a penalty forthcoming.

Cole got a gift goal to make it 4-0 with 10:41 remaining when he sent the puck into Philadelphia’s zone from just over the red line. The puck ricocheted off the back boards and then hit goalie Carter Hart’s pad before going into the net.

“You can joke with me all you want, but that was very unnecessary,” Maroon said.

In response to the comments, Maroon made a $2,000 donation in Edwards’ name to Tampa Bay Thrives, a nonprofit organization.

Cole Anthony had 20 points and fellow reserve Moritz Wagner scored 19 as Orlando's bench propelled the Magic to a 127-120 win against the Minnesota Timberwolves that included a fight between the teams and five player ejections
ORLANDO, FL・1 HOUR AGO
San Diego Union-Tribune

A fight broke out and punches were thrown during the game between the Orlando Magic and Minnesota Timberwolves on Friday night
ORLANDO, FL・2 HOURS AGO
San Diego Union-Tribune

Bucks have regained peak form now that they're healthier

Giannis Antetokounmpo is scoring at an unprecedented rate in his extraordinary career, and he also has most of his top teammates playing alongside him again
MILWAUKEE, WI・7 HOURS AGO