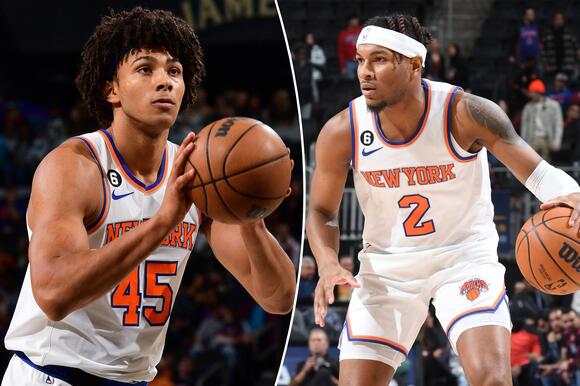 The Knicks are getting Miles McBride and Jericho Sims some game reps as the two wait for more chances to contribute.

The young duo, both in their second year with the team, were assigned to the Knicks’ G-League affiliate, the Westchester Knicks, for its game against the College Park Skyhawks on Thursday night. The Knicks didn’t practice on Thursday after playing three games in four nights.

The active 6-foot-9 Sims has performed well for the Knicks when given an opportunity, averaging 4.7 points, 4.9 rebounds and one block in 13.9 minutes, but he hasn’t seen rotational minutes in the last three contests. He was instrumental in the Knicks’ two best wins of the year, on the road against the Nuggets and Jazz, and played well recently in the narrow loss at home to the Trail Blazers.

At the moment, Sims is the odd man out in the team’s center rotation, as Mitchell Robinson and Isaiah Hartenstein receive the bulk of the minutes. McBride received a few limited chances to play while Derrick Rose and Cam Reddish were out, but he has returned to his role on the bench since the duo returned.

It was a busy and challenging month of November for the Knicks. It included four back-to-backs and 11 games against teams above the .500 mark. They went 7-9. December figures to be easier. Just two back-to-backs, which are both at home, and of the Knicks’ 15 games, only five are against teams with winning records at the moment.

The Knicks’ four home wins in 10 games are tied for the second-fewest in the Eastern Conference. Only the Pistons and the Hornets have less. They each have three. Their six road victories (in 12 opportunities), though, are second in the conference, behind only the Celtics’ seven.

This wasn’t the substitution the Knicks paid $107 million to make. But there Tom Thibodeau was, with 6:51 left in the fourth quarter, subbing out RJ Barrett in favor of Immanuel Quickley, the third-year guard who has become a defensive spark. That’s how it stayed — through the rest of regulation, through all of overtime and the final 11:51 in total — in the Knicks’ 129-123 loss to the Lakers on Tuesday night. Quickley played 39 minutes, his most since Dec. 31, while adding 19 points and eight assists. Barrett struggled and went just 5 of 13 from the field, and it...
NEW YORK CITY, NY・11 HOURS AGO
New York Post

If there is a sliver of a silver lining to Kevin Durant’s injury, it has forced the Nets to learn plenty about their roster. All 11 active players Monday played — and scored — in the first half alone. Their rarely used third-string center (Day’Ron Sharpe) and a couple of rusty guards (Patty Mills and Cam Thomas) took advantage of opportunity, leading the Nets to a victory over the Lakers that was encouraging for their record and helpful for evaluations. The NBA is just over a week away from its Feb. 9 trade deadline, when the Nets need to decide if they...
PHILADELPHIA, NY・15 HOURS AGO
New York Post

On one possession late in the fourth quarter, the Knicks had four different cracks at putting themselves in the lead, all quality looks from 3-point range. Each shot clanged off the rim, apropos of their frustrating evening from 3-point range. In their 129-123 overtime loss Tuesday night to LeBron James and the Lakers at the Garden, the Knicks went 7-for-34 from 3-point distance and didn’t hit a single 3 in the fourth quarter or overtime. They missed their last 10 tries. “I think we had good looks, especially that final quarter and throughout the game,” Jalen Brunson said. “The ball just didn’t...
NEW YORK CITY, NY・11 HOURS AGO
New York Post

From the start, LeBron James has loved Madison Square Garden as much as any NBA player, home or away, has ever loved it. He has publicly expressed his desire to play 82 games a year in the Garden. He has called the arena “my favorite playground.” So in an ideal Hollywood script, James would have broken Kareem Abdul-Jabbar’s all-time scoring record 2,800 miles from Hollywood, right here in the Garden on Tuesday night. Abdul-Jabbar grew up in New York as Lew Alcindor, and surpassing his 38,387 point total in the big city would have made for a perfectly appropriate scene. But that couldn’t...
NEW YORK CITY, NY・13 HOURS AGO
New York Post

YES Network is working toward offering its service direct-to-consumer by Yankees Opening Day at the end of March, The Post has learned. Here’s what you need to know: 1. While the aim is to be up and running by the time the Yankees face the Giants on March 30, YES won’t press go unless everything is lined up, so the start date could be moved. In late July, Yankees president and YES chairman Randy Levine said on WFAN’s “Carton & Roberts” that YES would have a DTC product “very soon.” 2. While a DTC offering would allow viewers to bypass cable and satellite...
2 DAYS AGO
New York Post

Patrick Kane may no longer be trade deadline fit for Rangers

The approach to the March 3 trade deadline that will arrive 13 games, three weeks and four days after the Rangers resume the schedule on Monday must address deficiencies exposed and lessons learned in last year’s defeat by Tampa Bay in the conference finals. When general manager Chris Drury reviews those final four games in which the Blueshirts recorded a total of one goal at five-on-five, he will be reminded that his team could neither get to the net nor win its fair share of the 50-50 battles that are almost always determinative when push comes to shove, as it inevitably...
NEW YORK CITY, NY・15 HOURS AGO
New York Post

Ben Simmons will miss his third straight game Wednesday with knee soreness. The Nets, on Tuesday, ruled out Simmons, who had been listed as “questionable” entering the team’s previous two games. Before the Nets’ win over the Lakers on Monday, head coach Jacque Vaughn said Simmons had shown “signs of progress” and he hoped he would be ready to face Boston on Wednesday. There is little clarity about the situation, which began when Simmons left a loss to the Pistons last Thursday citing left knee soreness, which has cropped up multiple times this season. In the past, Simmons has said the issue is...
BOSTON, NY・14 HOURS AGO
New York Post

see also Amar’e Stoudemire arrested after allegedly punching his daughter Misdemeanor charges against Amar’e Stoudemire were dropped by the Miami-Dude State Attorney’s office on Tuesday. The former Knicks star was arrested for allegedly punching and slapping one of his teen daughters in December, drawing blood. “A little over a month ago, my family’s world was turned upside down as I faced allegations that we all knew to be untrue – which I instantly and publicly denied,” Stoudemire said in a statement provided to The Post. “Today, I’m grateful that after a full investigation, all charges were dismissed. Fortunately, my family and most importantly, my...
14 HOURS AGO