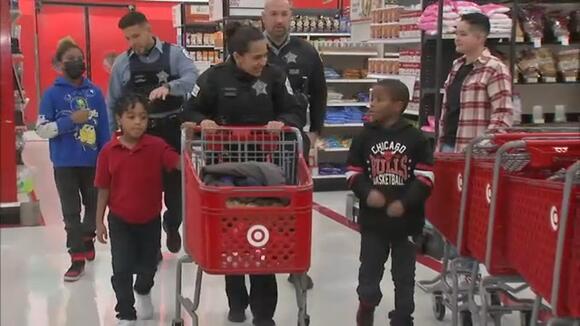 There were plenty of hugs and smiles at a South Loop Target Thursday. Dozens of Chicago police officers took more than a hundred children on a shopping spree for toys. It was the 17th annual "Shop with a Cop." Santa wasn't the only one looking to spread a little holiday cheer. There was also a special group of helpers during the 17th annual "Izzy's Shop with a Cop Day" at the Target on Clark Street. Former Chicago Bears player Israel Idonije is the driving force behind the effort. He got the idea a few years ago after a young boy he met during a school visit told him he hated police officers. "They're going to laugh together, problem solve together on their budget and they are going to start building a relationship," Ijonije said. The kids paired up with at least one Chicago police officer to shop for presents. "These children don't always see us in happy situations and they really invest in that personal relationship," said Commander Melinda Linas, with the Chicago Police Department. This year, more than 70 officers from districts across the city volunteered for the duty, many for the first time, like Officer Irma Calzada. "She's really great. She's really nice," said young shopper, Severous Winfield. A lot of the children planned on getting gifts for their family and friends. Each kid gets a hundred dollars to spend. The only conditions are that they make sure they get something for themselves and something educational. That's what 10-year-old Malakyi Wilson did. "I got my favorite book. I always get this when I go to the library at my school," Wilson said. Because of partnerships with neighborhood programs, more than 100 students from families currently facing some challenging circumstances participated this year. "That's building connections and that will make the kids feel safer when they see officers," said Muriel McDonald, a CPS school counselor. The gifts of trust and acceptance were shared too, as the day ended as it began with lots of holiday spirit and new friendships.

A Chicago Girls Scouts troop was robbed of eight cases of Thin Mints over the weekend.
CHICAGO, IL・10 HOURS AGO
ABC 7 Chicago

Kenneth Sawyer's 16-year-old son and two of his friends were held up at gunpoint after a quick walk down the street to get some late night snacks.
CHICAGO, IL・23 HOURS AGO
ABC 7 Chicago

The body of a 96-year-old woman was found in a freezer in a home in Cragin Monday.
CHICAGO, IL・38 MINUTES AGO
ABC 7 Chicago

Three people were injured in a hit-and-run crash on Chicago's South Side, police said.
CHICAGO, IL・19 HOURS AGO
ABC 7 Chicago

CPD warns of nearly a dozen more thefts of Hyundai, Kia cars on West Side

The body of a 96-year-old woman was found in a freezer on the Northwest Side, authorities said.
CHICAGO, IL・17 HOURS AGO
ABC 7 Chicago

An 80-year-old man shot and seriously wounded an intruder who forced his way into a home on the Northwest Side Monday morning, according to Chicago police.
CHICAGO, IL・21 HOURS AGO
ABC 7 Chicago

A teen boy was injured in a shooting on Chicago's South Side, police said.
CHICAGO, IL・1 DAY AGO
ABC 7 Chicago

Snowy sidewalks can cover grooves and markings that help people with disabilities travel safely through the city. Should the city being clearing its sidewalks everywhere?
CHICAGO, IL・22 HOURS AGO
ABC 7 Chicago

The 15-year-old had just left a final exam, joining friends at Harsh Park, when a car pulled up and shot at the group.
CHICAGO, IL・1 DAY AGO
ABC 7 Chicago

The two allegedly stole $19,000 and jewelry from a unit, which had a surveillance camera inside.
CHICAGO, IL・1 DAY AGO
ABC 7 Chicago

Demonstrators in Chicago, suburbs rally for change and transparency after Tyre Nichols' death

"We saw, on Friday night, one of America's most brutal acts!" said Bishop Tavis Grant with the Rainbow Push Coalition.
CHICAGO, IL・22 HOURS AGO
ABC 7 Chicago

The fire broke out on the first and second floors of the South Side building.
CHICAGO, IL・21 HOURS AGO
ABC 7 Chicago

Crimo is now due back in court on May 9.
HIGHLAND PARK, IL・8 MINUTES AGO
ABC 7 Chicago

Chicago shooting: 3-year-old boy, man grazed in Back of the Yards, police say

A toddler and man were shot on Chicago's South Side, police said.
CHICAGO, IL・3 DAYS AGO
ABC 7 Chicago

Thousands of people lined the streets of Chinatown for the annual Lunar New Year Parade on Sunday.
CHICAGO, IL・2 DAYS AGO
ABC 7 Chicago

Chicago police: 2 in custody after 7-Eleven robbery spree in East Side, Mt. Greenwood

A reward has been offered for information as Chicago police search for the driver of a luxury SUV who hit and killed a 93-year-old woman walking to the mailbox
CHICAGO, IL・4 DAYS AGO