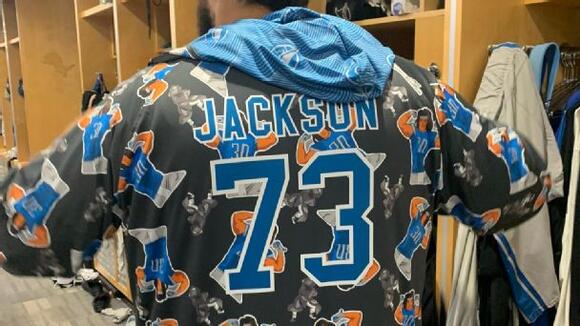 Running back Jamaal Williams , the NFL leader in rushing touchdowns, played the role of Santa Claus, gifting members of the offense -- as well as the coaching staff -- customized robes Thursday to show his appreciation for them as he's enjoying the best season of his career.

The robes feature cartoon-style images of Williams flexing in a Lions uniform. He personalized the gifts by adding the individual name and number of each teammate on the back.

"I thought this was what you're supposed to do as a vet. I'm just giving presents," Williams said. "This is what I've learned growing up. I'm used to every year with [ Green Bay Packers quarterback Aaron Rodgers ] giving us Uggs or something. I'm just trying to do my best as a good vet."

Williams, 27, has run for 734 yards and a league-high 13 rushing touchdowns in his second season in the Motor City. He spent his first four seasons in Green Bay.

Teammate Jonah Jackson was the first to sport the robe in the locker room. The Lions offensive tackle appreciated the gesture and ranked it in his top-three gifts he's received from teammates over the years.

"It's big. It just shows what kind of guy he is. He's a selfless guy and he's a giving guy," Jackson said. "Something like this is awesome. You never really think to get yourself a robe and how comfortable it is, but now this might be worn to the game, walk around my house, doing duties around time like grocery shopping and I'll put this on real quick."

Jackson said his former teammate and Los Angeles Rams quarterback Matthew Stafford once let them select items from the YETI website. He also recalled Lions guard Halapoulivaati Vaitai hooking the guys up with a Shinola watches and Bose speakers.

The Lions (4-7) will host the Jacksonville Jaguars on Sunday after winning three of their past four games. Williams has a chance to become the first Lions player to score a rushing touchdown in four consecutive games in a single season since Kevin Jones in 2004. His 13 rushing touchdowns are tied for the third most in a season in franchise history behind Hall of Famer Barry Sanders, who scored 16 in 1991 and 14 in 1989.

Jessie Lemonier, who appeared in seven games with the Lions in 2021 and recently signed with the USFL, has died at the age of 25, the team announced.
DETROIT, MI・1 DAY AGO
ESPN

Before he backed up Davis Webb at Texas Tech, and then Alex Smith with the Kansas City Chiefs, Patrick Mahomes duked it out with his best friend in what might be the most important quarterback competition in football history.
WHITEHOUSE, TX・1 DAY AGO
ESPN

The Carolina Panthers have agreed to hire Frank Reich as their new head coach, the team announced Thursday.
CHARLOTTE, NC・1 DAY AGO
ESPN

Not only does Purdy have the 49ers one step from the Super Bowl, but he might be making the case to be their starter going forward.
SAN FRANCISCO, CA・2 DAYS AGO
ESPN

Steve Wilks, who went 6-6 as interim coach of the Panthers, was "disappointed but not defeated" after Frank Reich was hired for the full-time job.
CHARLOTTE, NC・12 HOURS AGO
ESPN

Miami dismisses Josh Gattis as OC after one season

Miami has fired Josh Gattis as offensive coordinator after one season after the Hurricanes fell from a top-20 offense in 2021 to No. 86 last season.
MICHIGAN STATE・14 HOURS AGO
ESPN

If Eagles fans needed any other reason to get fired up for the NFC title game against the 49ers, some San Francisco fans seem to have temporarily defaced the iconic monument.
PHILADELPHIA, PA・7 HOURS AGO
ESPN

Kansas City went from favorite to underdog and back to favorite during the week, with each update on Chiefs quarterback Patrick Mahomes' injured ankle triggering rushes of money on either the Chiefs or Bengals.
KANSAS CITY, MO・12 HOURS AGO
ESPN

Andy Reid said Patrick Mahomes is moving around well and that "he can go out and play" in Sunday's AFC Championship Game against the Bengals on Sunday.
KANSAS CITY, MO・7 HOURS AGO
ESPN

James Laurinaitis, a two-time captain and three-time All-American at Ohio State, is joining the Buckeyes' football staff as a graduate assistant, the school announced on Friday.
COLUMBUS, OH・6 HOURS AGO
ESPN

Cincinnati Bengals tight end Hayden Hurst, who was slowed by a calf injury on Thursday, was a full participant at Friday's practice and will play in Sunday's AFC championship game against the Kansas City Chiefs.
CINCINNATI, OH・9 HOURS AGO
ESPN

Dolphins quarterback Tua Tagovailoa remains in the concussion protocol and will not participate in next week's Pro Bowl Games, a source told ESPN.
9 HOURS AGO
ESPN

McDaniel had the Dolphins among the league's elite until Tua Tagovailoa's concussions changed the narrative of their roller-coaster season.
MIAMI, FL・16 HOURS AGO
ESPN

Our experts give their analysis of the biggest storylines for both NFL conference championship games and offer their best tips and picks for the weekend.
KANSAS CITY, MO・16 HOURS AGO
ESPN

Golden State Warriors star Stephen Curry was fined $25,000 for tossing his mouthpiece into the stands late in Wednesday's win over the Grizzlies.
SAN FRANCISCO, CA・3 HOURS AGO
ESPN

Christian McCaffrey trade from Panthers to 49ers: Inside story

McCaffrey wasn't looking to leave the Panthers, but moving to the 49ers has been a boon for him and for San Francisco's Super Bowl hopes.
CHARLOTTE, NC・17 HOURS AGO